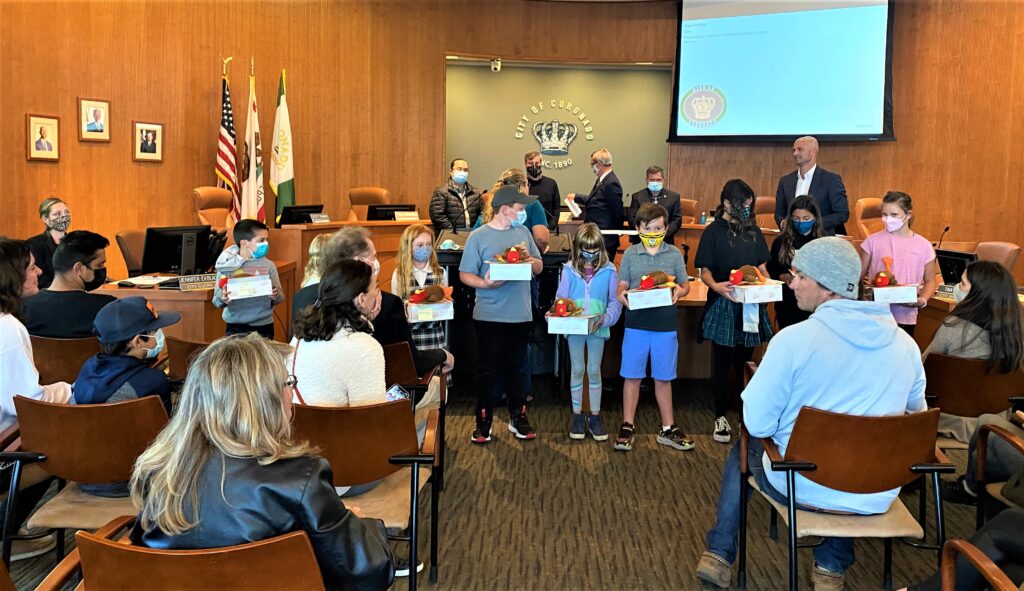 “The best ceremonial presentation of the year,” noted Mayor Bailey before the annual Thanksgiving Poster Coloring Contest Winners were introduced. Program Supervisor Stacy Berman agreed, as she assisted the City Council members in giving out the nine awards for the annual Turkey Coloring Contest. This fall event is sponsored by the Coronado Junior Woman’s Club, for children in grades Kindergarten through fifth grades. Berman highlighted that this year they received 250 colorful submissions, more than ever before, and the public can view the entries posted on the walls in the Community Center. 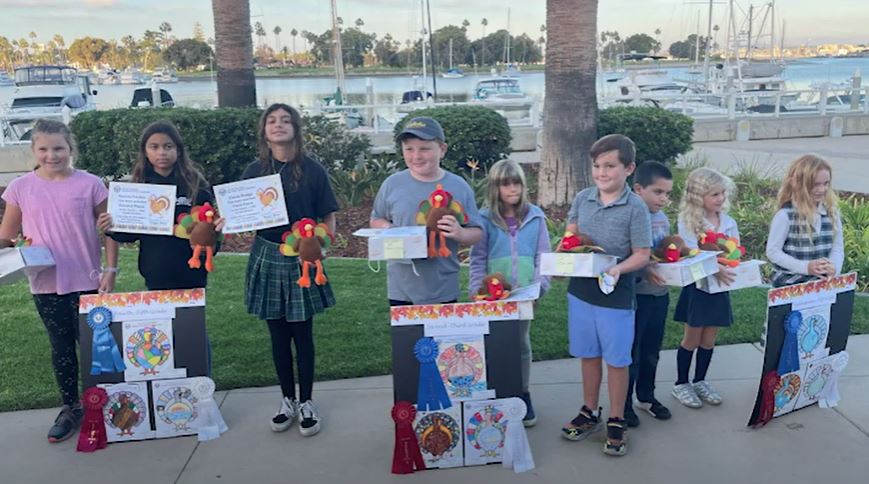 In the ongoing saga of Senate Bill (SB) 9 zoning density laws, which take effect January 1, 2022, Senior Planner Jesse Brown gave a presentation on staff and Planning Commission compliance recommendations. A basic look at SB 9 shows that it requires approval of two dwelling units on a single-family zoned parcel, and approval of urban lot splits in single-family zones, which could result in up to four units where one home is located.

He pointed out that three municipal codes would have to be amended to accommodate the SB 9 requirements for applicable parcels, which are single family zone, non-historic, no existing guest house, not occupied by tenants in the last three years, and at least 2,400 square feet for a lot split. Brown pointed out the recommendations for the front and street side yards be maintained and a minimum of four-feet for side and rear yard setbacks. He also noted that with regards to FAR and site coverage, standards of underlying zone remain unchanged and must permit at least two 800-square foot units, vehicle access to right-of-way is required, existing prohibition on alley only parcels, and parking requirements will remain as SB 9 does not supersede the Coastal Act. Occupancy requirements include that the owner occupancy required for two units on one lot is owner occupancy for three years, and no short term rentals – with 30-day minimum stays.

As referenced previously, none of the Councilmembers are happy with these requirements being imposed by the state, with Councilmember Heinze stating, “It’s just bad urban planning from a thousand miles away.”  The Council unanimously approved these municipal code amendments for state compliance.

“Crossing Paths” is the new hybrid public art project Senior Management Analyst Kelly Purvis proposed to the council. She highlighted that this would add to the more than 75 permanent and temporary installations in Coronado’s collection, noting that 88 percent of residents responded positively in support of public art in the 2021 Coronado National Citizen’s Survey.

The piece, which was resident-initiated by the Coronado Shores Alliance Group, would stand 10 to 11 feet from the baseplate, and be made out of stainless steel and other corrosive-resistant components for the environment. The artist is Amos Robinson, well-known for the “My Bike” art in Tidelands Park, of which he has created around 100 similar, yet unique bike sculptures.

From San Diego, he has created 26 public art installations, and has created only three other sculptures similar, but with unique characteristics, to the proposed “Crossing Paths,” one in the U.S., one in Costa Rica and one in Tasmania. It will be located as a beautiful moving art piece at the juncture where Paseo del Mar transitions from bike riding in front of The Del to no bike riding allowed in front of the Shores. This will be an additional signal that bike riders need to walk their bikes, while incorporating a beautiful piece of public art in the newly redesigned cul-de-sac of Avenida del Sol. This project is unique in that it will be situated on private land, but owned and maintained by the city, and the $50,500 funding will come from the Hotel del Coronado Development Agreement Fund. The council unanimously approved this project, which will take six to eight weeks to create, and should be installed in the first quarter of 2022.

Allowing bicycles at the skatepark was moved to the Consent Calendar by Councilmember Donovan, and unanimously approved after it was determined that no additional expenses would be incurred. This is sure to make the teens who petitioned for this at previous council meetings happy.

The Results Are In – SD County Official Election Results