UPDATE 10/17/2021 – A Coronado Shores resident reached out to The Coronado Times with these photos of tar found on the beach near the southern-most building of The Shores on Saturday, 10/16. The resident said that he flagged down a lifeguard in a truck and showed it to him; the lifeguard took a photo and said he would alert his lieutenant. The resident said that although he knows some tar can often be found on the beach, “this was different” and it had a very strong smell. He said that since there isn’t oil drilling near here we usually don’t see big clumps. 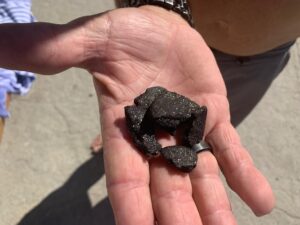 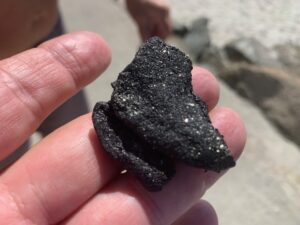 After an offshore pipeline leak spilled oil into the water off the coast of Orange County at the beginning of the month, a coalition of local, state and federal agencies is responding to the spill which is impacting beaches extending south to San Diego County. Headed by the U.S. Coast Guard, the Unified Command is sending cleanup assessment teams to monitor, inspect and clean beaches as needed. Current reports from trained oil observers and beach cleanup contractors working for the Unified Command show significant progress in cleanup operations. Beaches in Newport Beach and Huntington Beach reopened on October 11.

No tar balls have been reported in Coronado, but Lifeguards continue to patrol the City’s beach for any signs of impacts. Preliminary findings estimate that about 25,000 gallons were released during the oil spill. Those who find tar balls on local San Diego beaches are asked not to touch them or pick them up because they are a hazardous material. Report sightings at tarballreports@wildlife.ca.gov or contact Coronado Lifeguards at 619-522-7346.

More than 1,800 personnel from around the country aided in the spill response at the height of cleanup operations; 116 local volunteers were trained and assisted in shoreline cleanup efforts.

The Unified Command is cognizant of environmental impacts from response efforts and is continuously assessing its footprint. Resources will be adjusted appropriately according to mission needs.

No free-floating oil has been observed on the water since Oct. 5. Containment boom, which is designed to restrict the flow of free-floating oil, significantly protected sensitive areas where it was deployed early in the response, is now being removed. On-water oil-recovery operations have ceased, and all public beaches in Orange County and San Diego County are open.

Overflights have also been suspended pending any major changes in the response. The Unified Command has made the decision to use smaller, more environmentally friendly drones to conduct assessments of sensitive sanctuaries further reducing environmental impacts.

Tar ball collection on Orange County beaches has decreased, and recovered tar balls are increasingly smaller in size and more dispersed. Amplify Energy has secured the pipeline from leaking.

“Based on data and reports from trained observers and cleanup crews who are on Orange County beaches every day, we are seeing decreasing amounts of oil and are assessing segments of beach for no further treatment,” said Capt. Rebecca Ore, federal on-scene coordinator for the response. “Initially we surged our response capacity to the worst-case scenario and are now working to transition to a long-term plan for tar ball recovery.”

“Onshore seafood sampling is underway to evaluate fisheries in the areas affected by the spill and the California Department of Fish and Wildlife director will reopen them upon recommendation by the state Office of Environmental Health Hazard Assessment,” said Lt. Christian Corbo, state on-scene coordinator for the response.

The Pacific Marine Mammal Center responded to a juvenile northern right whale dolphin found stranded at Cabrillo Beach. The difficult decision was made that humane euthanasia was best for the animal. A necropsy completed Thursday afternoon found no signs of oil inside or outside the dolphin. However, additional investigations will be made into the cause of death.

To date, 32 birds have been captured, 24 have been cleaned and 8 have been rehabilitated and released.

The public health assessment unit of the Unified Command continues to conduct water and sediment sampling with no abnormal results. Air monitoring and sampling will cease, as air samples over multiple days show all spill-related readings are within common background levels and below health-based thresholds.

Following an increase in tar ball sightings during post-storm assessments, the Unified Command surged crews to San Diego County to maximize cleanup efforts. The beaches remain open and there is no public health risk at this time.

“Our county agencies continue to work with the Unified Command in Orange County to obtain resources for our local beaches, and things are getting done,” said Stephen Rea, deputy director for the County of San Diego Office of Emergency Services. “The Unified Command has responded to our requests for additional shoreline cleanup and assessment teams after more tar balls washed up after the storm earlier in the week. U.S. Coast Guard Sector San Diego is also playing a critical role with local cleanup coordination.”

“I greatly appreciate the community in San Diego County for reporting their concerns to help tailor the cleanup strategy and get the tar balls removed from our beaches quickly,” said Capt. Timothy Barelli, the Coast Guard captain of the port of San Diego. “We will continue to assess San Diego County beaches through multiple tidal cycles to ensure we keep our shorelines safe for the public and wildlife.”

Specific beach openings and closing statuses are managed by local governments. Please visit http://sdbeachinfo.com for the latest information regarding the beach status in San Diego County. 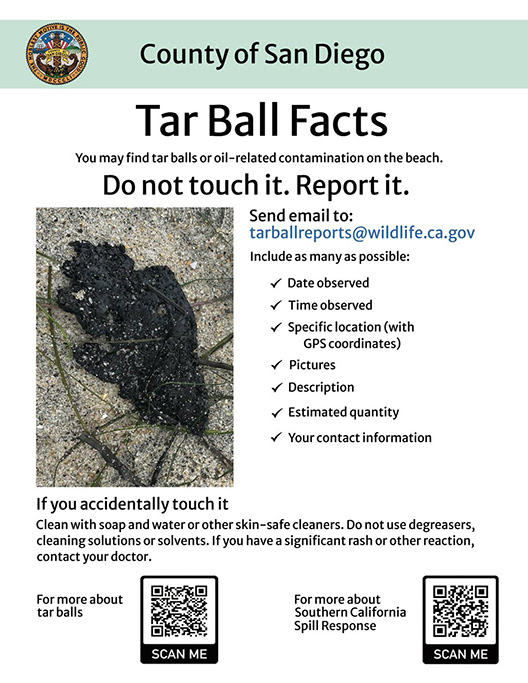 The cause of the spill remains under investigation.