Editor’s Note: This is a developing story. Further, some material displayed in this story is offensive, but necessary, in order to understand the scope of what took place.

What should have been a night of celebration quickly turned contentious when members of the Coronado High School basketball team hurled tortillas at the Orange Glen High School basketball team, after Coronado won the CIF championship 60-57 in overtime. Prior to the tortillas being thrown, there was a heated exchange between the Coronado and the Orange Glen coaching staff – video below shows more details. CIF says they are issuing an immediate review into the incident, and that the organization “prohibits discrimination or any acts that are disrespectful or demeaning toward a member school, student-athlete or school community.” 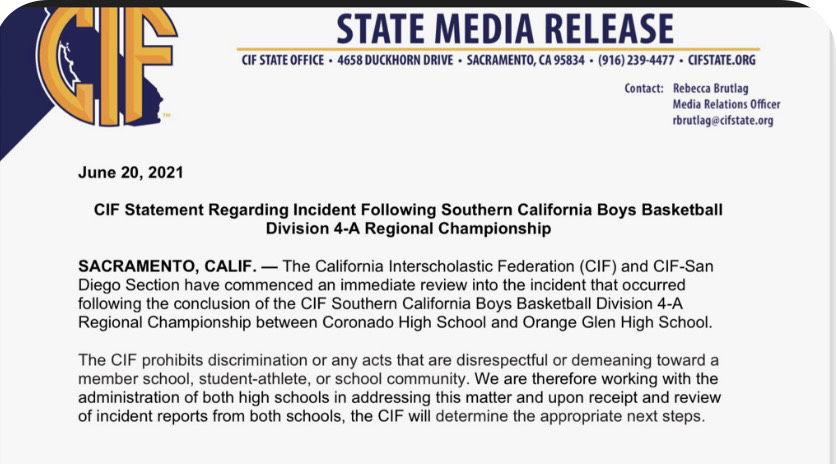 Following the conclusion of the game, which took place at the Coronado High School gym Saturday night, social media exploded with angry comments county-wide, calling the actions “racist,” “shameful” and “disgusting,” noting that many students at Orange Glen are Latino. The post-game scuffle, which got so intense that at least one person called 9-1-1, also prompted Coronado Superintendent Karl Mueller to issue an apology email to CUSD community members.

The following videos and embedded media help give insight into what took place and the reaction that followed:

Game-winning shot by Coronado’s Alex Crawford as the clock expires:

The below video shows Coronado’s head coach, JD Laaperi congratulating Alex on the winning shot and then yelling and motioning in the direction of the Orange Glen coaches and players. The Coronado Times reached out to both head coaches for comment regarding this interaction, but have not gotten a response at this time.

Here’s our report on what happened Saturday night in the Orange Glen/Coronado game. pic.twitter.com/jIejqd7ode

“The head coach and the assistant coach came over to our bench and kind of said some words that were inappropriate and told us that we should take our kids and ‘get the F out’ because we were a bunch of losers,” said Lizardo Reynoso, assistant coach for Orange Glen High School.

A longer video from a different angle:

💯 Agree! @CoronadoUnified has had trouble passing anti discrimination policies, this behavior is unacceptable and reprehensible, the adults in the room need to do better and teach their kids/athletes better. As a community, we me must address this wrong. https://t.co/A0g5MAC0c6

“I was appalled to learn that immediately following the basketball game last night, members of our community were involved in an altercation and unsportsmanlike conduct which included throwing tortillas at our visitors from Orange Glen,” said Coronado Unified School District Superintendent Karl Mueller in an email on Sunday morning. “This behavior is reprehensible. We cannot allow anyone in our community to be made to feel unwelcome and we send our deep and sincere apology to the Orange Glen community …. Swift action will be taken to address all those involved, and they will be held accountable.”

The Coronado Police say they have identified the adult male who brought the tortillas to the game. Attendees shared via email and on social media that the man, a Coronado High Alumni, brought “bags of tortillas” to the game and was handing them out to fans on both sides. An investigation is underway.

Various first-hand accounts shared via email and on social media assert that on Saturday night, the already-frenzied game was rife with unsportsmanlike behavior from both sides.

John Coolidge, who was sitting in the section behind the scorers table, said that the game got heated in the third quarter, when Orange Glen parents started taunting and yelling at the Coronado players, resulting in the referee warning the coaches about fan behavior. He said the game then quickly got “out of hand” with “racial slurs” including the “n word” being used between Coronado and Orange Glen fans, and coaches from both sides. He faults the referee for letting the problem escalate.

“Racial slurs between Orange Glen spectators and their assistant coach, with Coronado’s coaches and alumni behind the bench was the catalyst for this unfortunate incident,” said Coolidge. “The “n” word was flying out of people’s mouths. And that’s when the tortillas came flying to add gasoline to the fire. How do I know? Because I was in the middle, trying to keep the peace.”

Coolidge said that the students did not bring the tortillas to the game, and neither did the cheerleaders.

Coolidge said that “cheerleaders were given tortillas but did not throw them at any time,” and that “the adults found the package where the cheerleaders were sitting and assumed they threw them, not the case. The cheerleaders did the right thing and did not fall for a stupid adult racist prank.”

Ariana Featherly, the wife of the Orange Glen head basketball coach, sent an email to The Coronado Times expressing her deep concern and sadness for how the incident was handled.

“Our kids are so mentally and emotionally upset,” she wrote. “Not only did they lose the game, and then the tortillas and the racial slurs were being thrown at them. They did not even give Orange Glen a locker room to dress out, or get ready in. They had to meet outside during halftime.”

Regarding locker rooms, CHS Athletic Director Robin Nixon shared that, “No locker rooms were given which was standard all year due to COVID restrictions. To my knowledge, they never even asked, or I should say they never asked me about locker rooms.”

Featherly also asserted that the CPD treated Orange Glen like “villains” and they “kept threatening parents and coaches saying they’ll go to jail if they don’t leave the gym. Very very sad and upsetting. It’s horrible.”

The CUSD School Board also quickly sent out a message of apology to the Orange Glen Community, acknowledging that members of the Coronado community hurled tortillas at Orange Glen students, a “predominantly Latino school district.”

The School Board’s letter said they “acknowledge these acts to to be egregious, demeaning, and disrespectful. We fully condemn the racism, classism, and colorism which fueled the action of the perpetrators…”

The CUSD School Board also said they will hold an emergency special meeting of the board on Tuesday, June 22, where they expect to “hear the initial results of ongoing investigations and consider additional actions that may need to be taken.”

“We have been in contact with the Coronado Unified School District regarding last night’s incident. They send their deep and sincere apology to the Orange Glen community and shared that the individuals who participated in these reprehensible actions do not reflect their school district values. We understand they will be taking swift action to address all those involved and have included their message to our community below.

There is no place for hate in EUHSD. We do not tolerate racism, cultural disrespect, or any other behaviors that demean others. We remain committed, as a district, to creating safe spaces for all our students. What we do to combat racism and cultural disrespect must extend beyond the classroom and school campus.+

Read the full statements from both school districts (in Spanish and English).

This is a developing story.