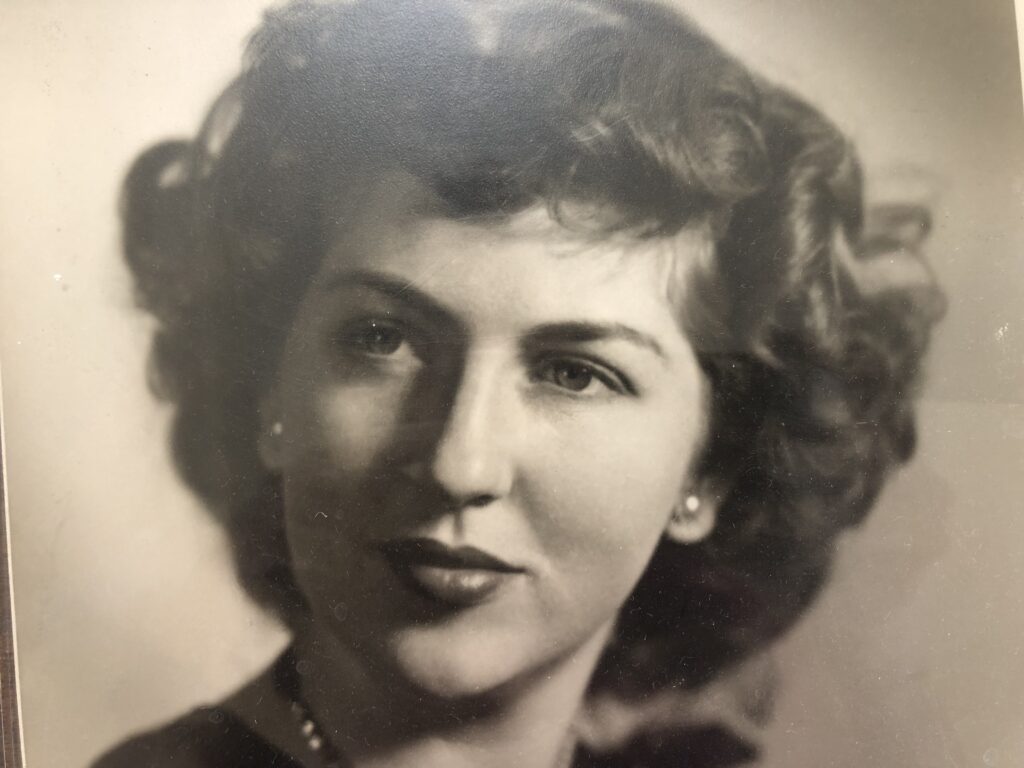 From her birth in Riverside, California, to April 11, 2021 (one month shy of turning 97) in Coronado, Lydieann “Ann” Juanita Glick Mitchell experienced life to its fullest, in planes, trains, automobiles and more. Pictures and home movies (with husband Wally documenting the moments) are a fantastic portal into her journey; a kaleidoscope of the facets of her life: independence, love, family, curiosity, teaching and learning. All her unique adventure.

She attributed her approach to life and sense of adventure to her upbringing.

Ann’s parents divorced, and in 1936 her mother, Mary Ruth, who had been to Bible College, took Ann and her little brother Bobby on a three-week voyage on a British freighter to the Philippines where she was going to be a missionary.

They returned when it didn’t work out. Her mother didn’t believe in doctors, so received help for a brain tumor too late. That story is captured in her 67-page (yet to be published) autobiography, Mama was a Gypsy: My Wild Irish Mother. For a birthday video by daughter Jane Mitchell, Ann shared, “My mother said ‘Lydieann, don’t cry when I die. Because I’m going to Heaven, so don’t cry. I’ll see you someday.’ I said ‘No, I want to die when you go.’ When you die. I did cry. I went into a closet and cried. The one thing she did say was ‘Lydieann, don’t do anything that Jesus wouldn’t want you to do.’” And that is how Ann lived her life.

Here is an excerpt from Mama was a Gypsy: My Wild Irish Mother (written and edited between 1995 and 2021.)

“As a teacher, I advised and encouraged my students to write about their own experiences… to increase their motivation to read… their self-esteem… and to record their experiences to serve as a word picture of their lives… I have taken my own advice…tickled my brain cells to recollect things that I had forgotten. This process has made me younger way back to 5 years old. I recommend this activity to add years to your life, years that have already been used. I must warn that there will be tears of regret and sadness, as well as pleasure. But ‘that’s life.’ I am glad that I had a chance to have one.

To my children, I wanted to be different from my mother in some ways. Concern for their welfare and their education has been foremost in my life, many times to a fault. Perhaps I have tried to compensate for my lack of that kind of “mothering” while I was growing up. But the effect has not always been to their benefit or mine. I might have diminished their independence by giving too much help, or not enough when I felt I had to “toughen” them up. Time will tell, or they will. In a subsequent book, these tales will be told. My own children might someday say about me, “Like Mother, Like Daughter. My Wild Irish Mother. She’s a Gypsy, too.” 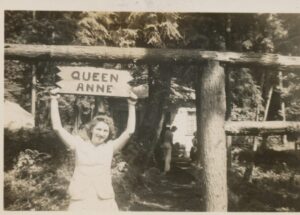 At 14, in Seattle, she worked her way through high school and then the University of Washington as a live-in maid/nanny and waitress, then after World War II as a dance teacher. Nicknamed “Miss Star” she had turned down marriage proposals, until she met a student — a vibrant, handsome sailor. “So, Wally had the same thought. And when I saw him,” she said, “I thought, he’s the one that I would like!” They married November 2, 1946 with a small wedding that cost $50. 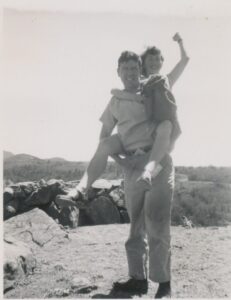 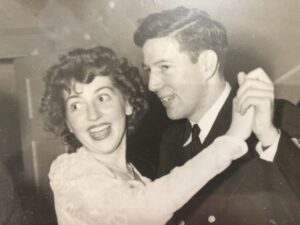 Her new husband, “J” Wallace Mitchell, was often stationed at Naval Air Station North Island (1948), and later they bought their first home in Coronado in 1959, even though Wally didn’t like the beach, because they heard Coronado had good schools. They raised their four children, Jerald, Scott, Robyn and Jane here. 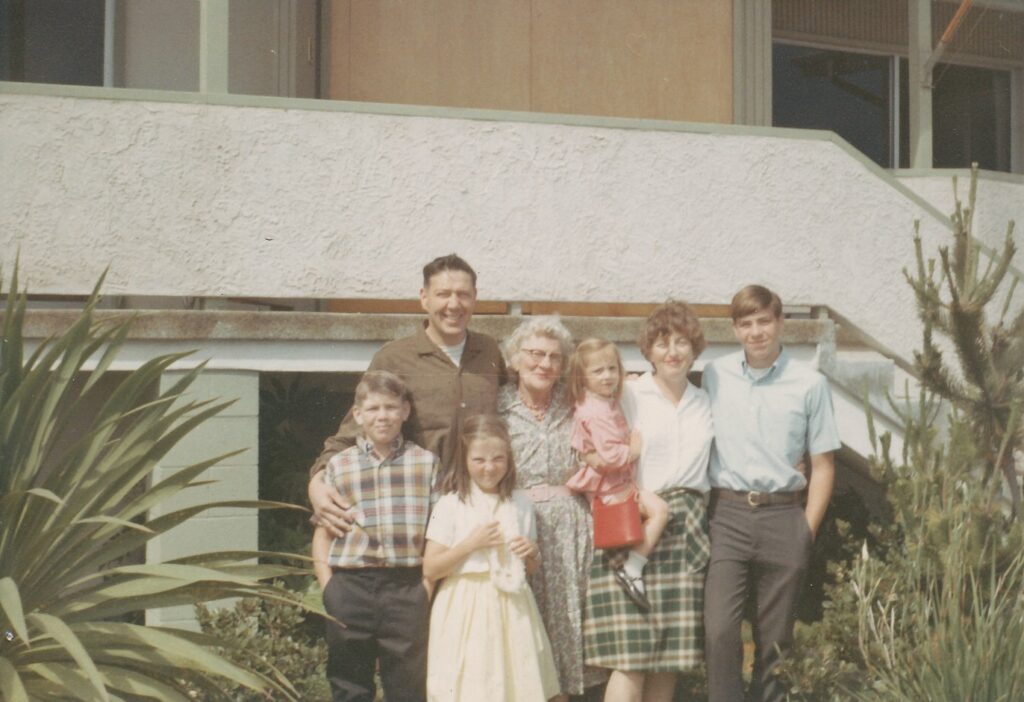 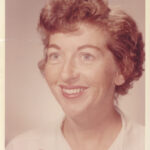 Ann was a teacher for 31 and a half years, with 20 years at Oneonta Elementary in Imperial Beach. She made her 2nd Grade Room 5 fun: baking Monster Cookies to learn math, publishing their own stories in a book, and by introducing her students to new things through field trips or her home for ice cream. Her 1985 classroom’s book dedication included, “to my husband Wally, who warns me not to, but helps me when I do.”

Some photos from her classrooms: 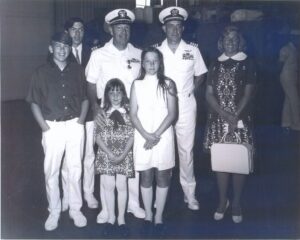 Ann and Wally (retired as a Commander after 30 years of service) showed their children the world on a shoestring budget, and the duo traveled overseas, fishing and camping in their Airstream trailer even more after Ann retired in 1989, and until 1991 when Wally was diagnosed with ALS and she cared for him.

This poem she wrote July 12, 1984 captures her love of their Airstream trailer travel.

The time to be used, will reckon, how long, how far, how much more.

If the place or neighborhood doesn’t fit. We’ll go a few miles and maybe take root.

A car, a trailer, a companion and driver, as long as there’s safety, comfort and food, HOME is where we park it. HOME is on the move.

We can’t do it forever, but we can do it for a while.

I’ll keep my friend and trailer… and treasure every mile.”

After Wally’s passing in 1994, she traveled with friends and her children, finding adventure around every corner or conversation, whether across the world or in Coronado at Concerts in the Park, the Senior Association, the Bridge and Bay Garden Club, or walking down the street with her 4-wheel scooter she needed for balance after hip surgery. Always the fighter, she survived three bouts of pneumonia. 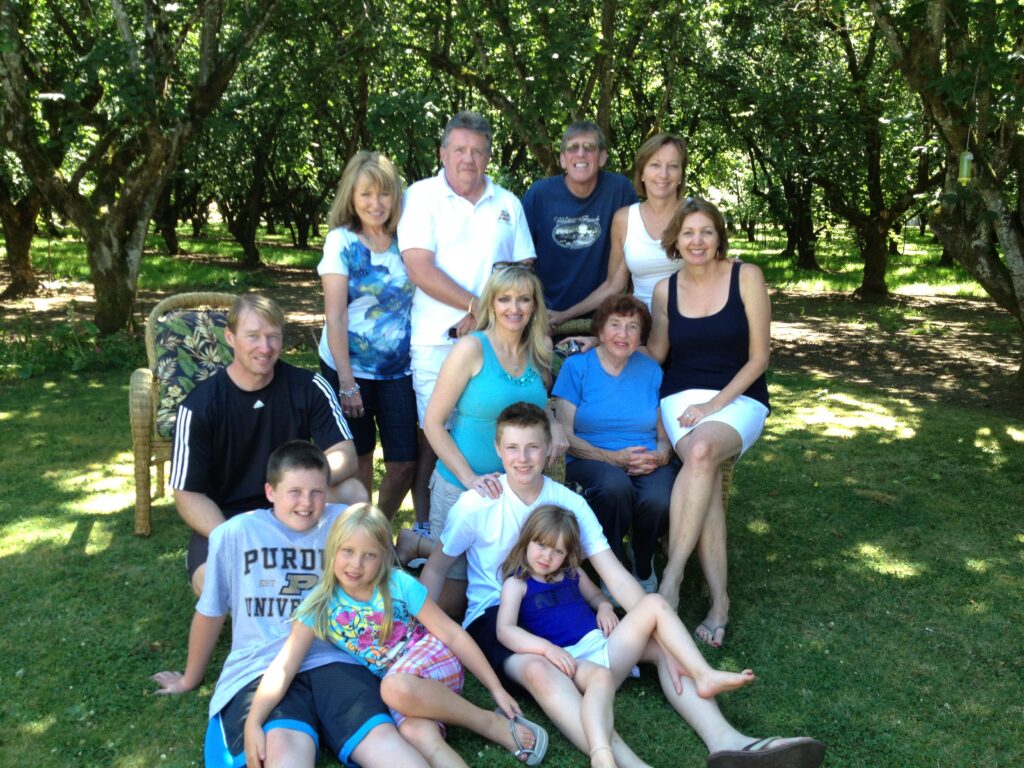 She had empathy for people at different stages in life and generously shared her home, what she and Wally called “Mitchell Manor,” with those needing a respite, a cozy place to stay, a vacation, or just for a serendipitous meeting. Strangers became friends with grateful hearts and happy memories. Always a cheerleader and encourager, she inspired countless to express themselves and follow their passions and dreams. 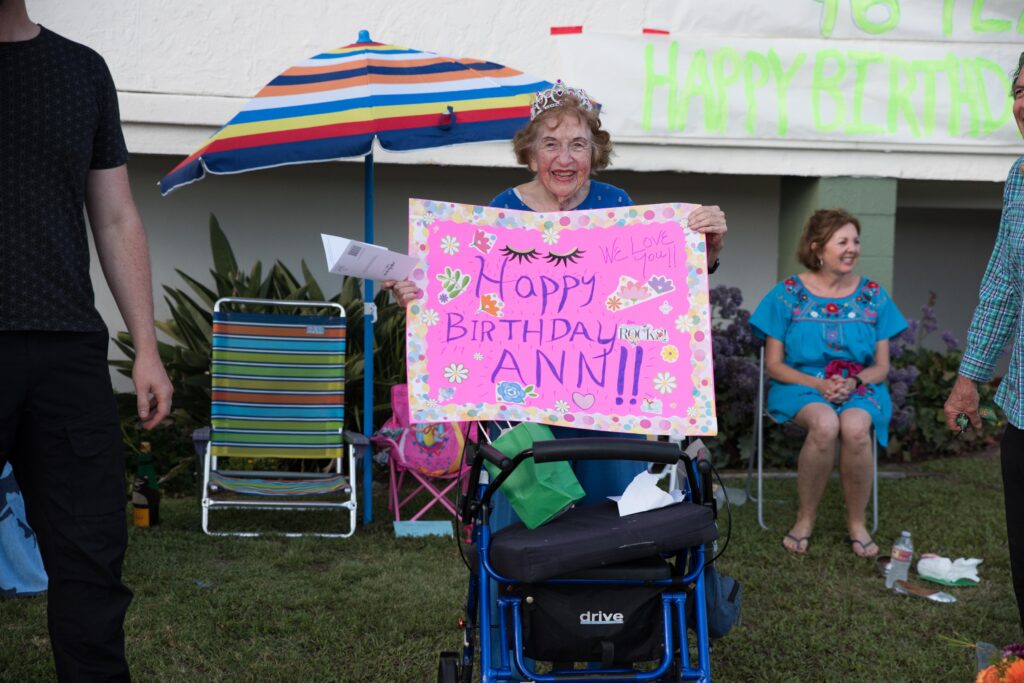 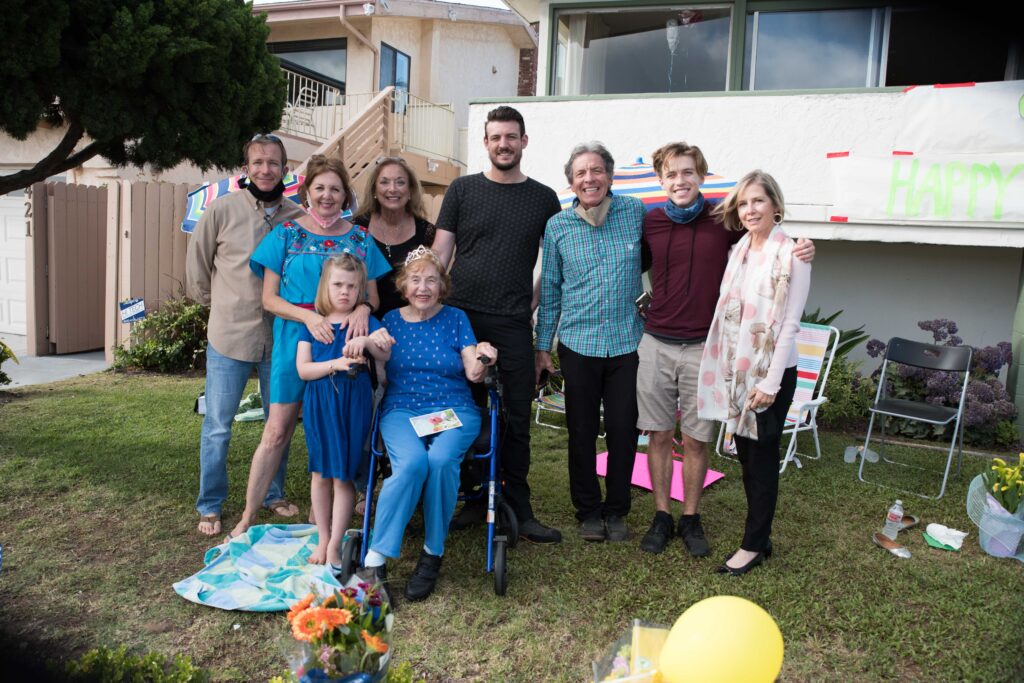 In 2019, at her “Around the World in 95 Years… So Far” themed birthday party, with 100 family and friends, Mayor Richard Bailey proclaimed Saturday May 18, 2019 as: “Ann Mitchell Day.” In 2020, she beamed at a Covid-allowed drive/walk by 96th birthday parade. Four days later, a fall breaking her wrist and a fourth bout of pneumonia, were a setback. Unable to use her trusty walker with her cast on, she required more care at home but was determined to make the best of each day. 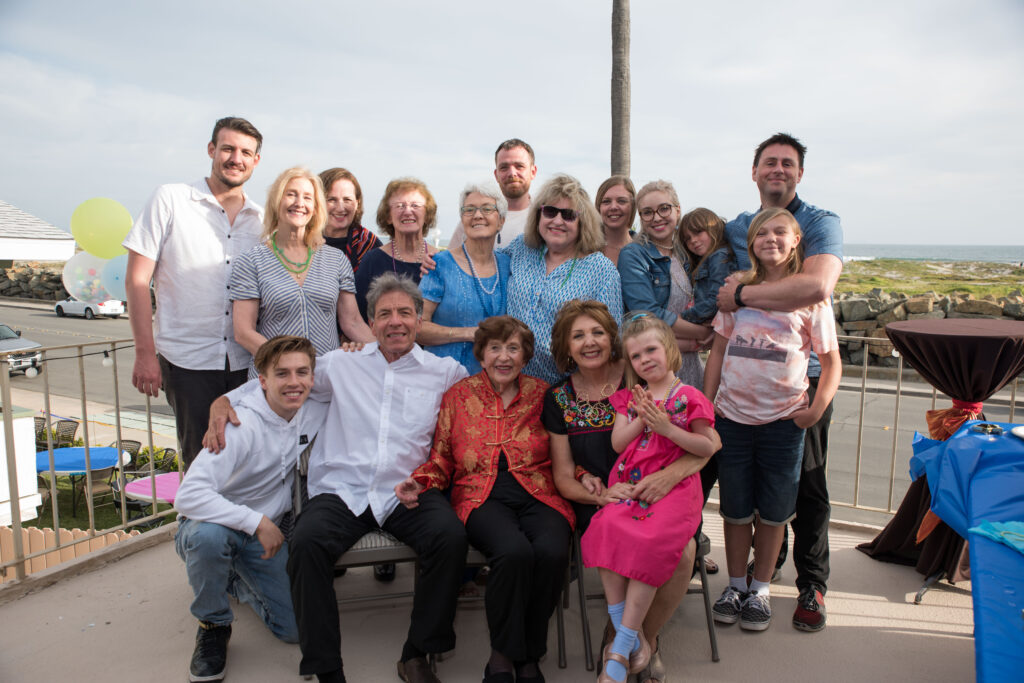 She used to read the local obituaries and live those lives vicariously for a moment, feeling like those featured had perfect and happy lives. She pondered what her obituary would say and wanted it to be nice yet asked that it include that among her countless blessings, she had experienced heartache, betrayal and disappointment. “That is the truth,” she would often say and write. Ann was proud she and Wally were able to come from very little to being property owners and having various real estate and business ventures. She frequently said, “I’ve worked hard my whole life to get where I am,” and despite some distress, as an eternal optimist and person who often stood up, spoke up, or expressed her ideas publicly and privately when something wasn’t right, she hoped that doing right would win out over being right, and that her views and experiences from all phases of her life would help others someday, too, even in her passing. 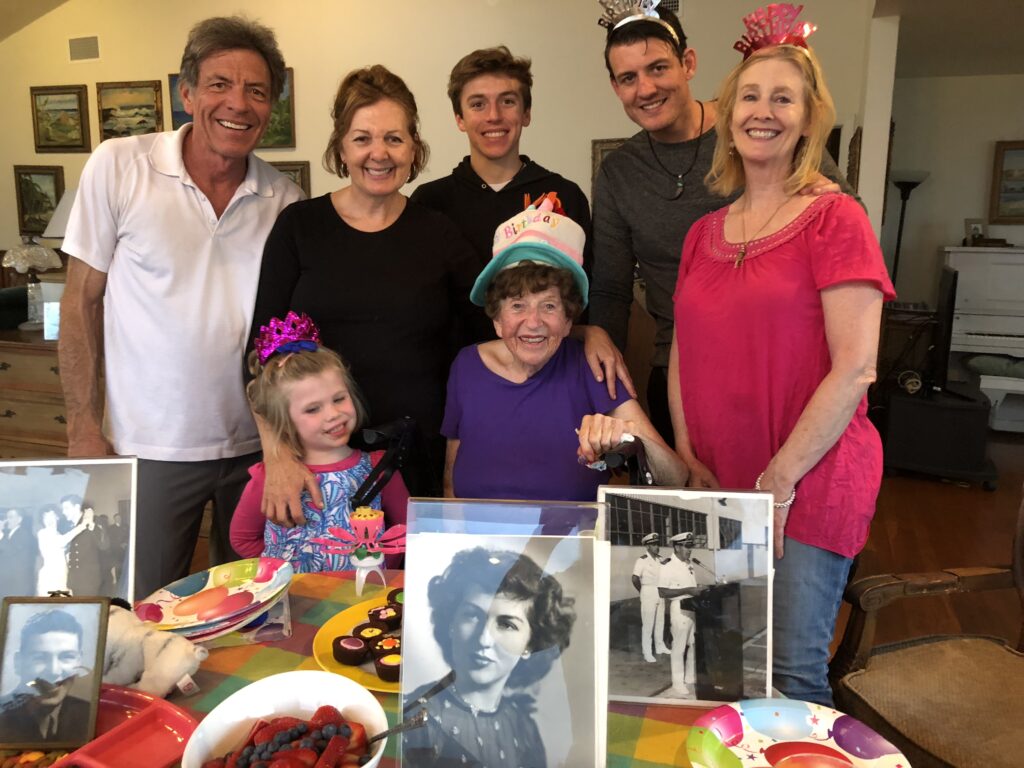 She recently and vivaciously thanked her health hero, Dr. Asha Devereaux, and her office team of Karen and Lupita, as do we, for their compassionate and extraordinary care and guidance during Mom’s health ups and downs, always with love and a smile.

It was an honor and privilege for Mitch, Lily and me, along with some beautiful and patient caregivers and visitors, to navigate through her everyday needs and wants. As some friends wrote in a note, “Your mom never wanted to miss out on anything… and you made sure she got there!… She was an Energizer Bunny who just kept going!”  Even with Covid, and as she recovered from the fall, we found ways to enjoy each day, namely making fantastic healthy smoothies in her Vitamix with fresh greens from our friend’s farm, with wheelchair walks around the neighborhood and down past the Del, feeding the seagulls old bread at North Beach, talking with people along the way, and watching the sunset. For several months, evenings were spent with Mitch watching home movies from the Mitchell archives; re-living happy and adventurous times with the family and Wally.

A turn in her health mid-March, then Easter weekend led to three days in the hospital. Jane’s 3 AM Facebook post from the hospital asking for prayers, so Ann could get home for one more sunset, was met with overwhelming love and comments showing the power of prayer. Mom was touched and grateful. She was also able to see all four children together one last time. 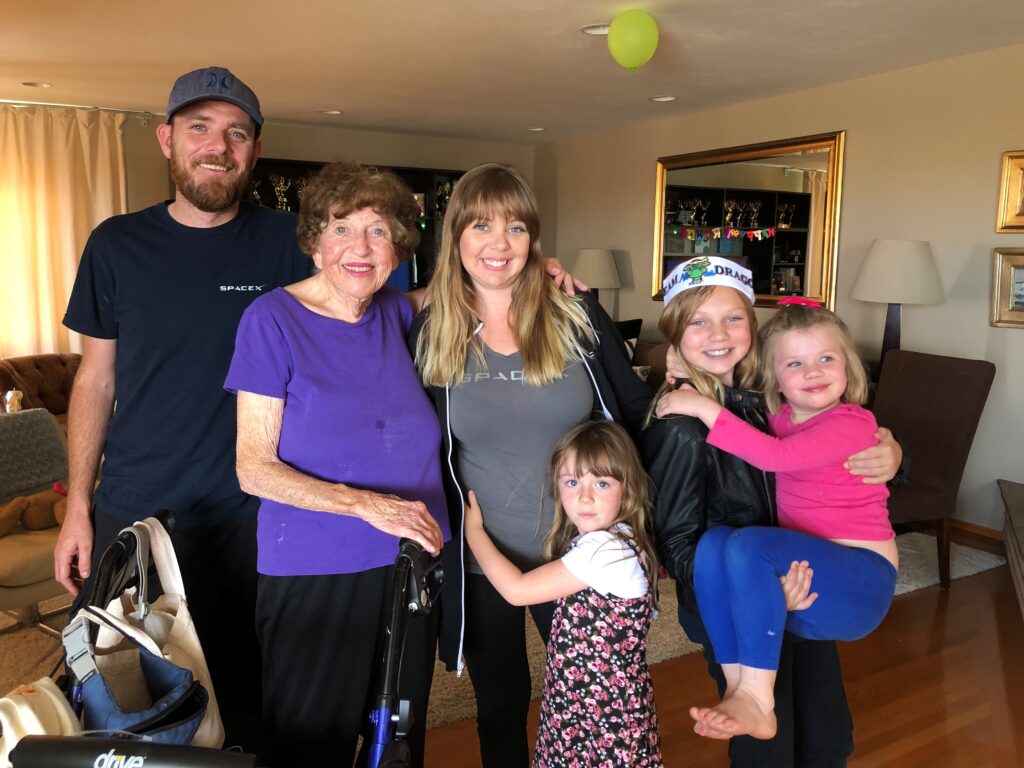 Thank you to Sharp Coronado’s ED, doctors and nurses and to Sharp Hospice for their beautiful, respectful and professional care. She returned home Wednesday for a short wheelchair walk down Ocean Blvd., then watched the sunset from the porch. Her final three days were peaceful with rest, favorite songs playing, listening to a few voice messages and calls from far away friends and family, hearing us read Mama was a Gypsy book aloud, playing the piano and praying with our ministers. Holding our hands, she went to Heaven to be with God, her family, including her beloved Mama, and her favorite dance partner, Wally. 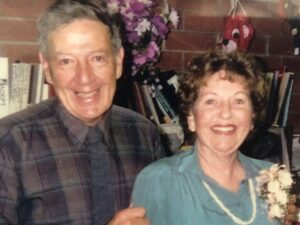 It’s all part of her story, her legacy. The world is a better place because of Ann Mitchell. She will be in our hearts, and she only hoped those she knew would choose to honor her simply by honoring all she stood for and all she taught. She was an exemplary, loving, and caring mother, grandmother, wife and friend who enjoyed life and her community. She was a “Gypsy, too” in all the most genuine and generous ways. She wanted and hoped for little in return, except respect and love in actions more than words. She said, “It feels like I’ve used my life well.” Well, indeed.

Ann’s remains will be placed in what she called “our box” at Fort Rosecrans with her husband in a private family ceremony.

Submitted with respect and love for our remarkable mother,
Jane and Jerald “Mitch” Mitchell 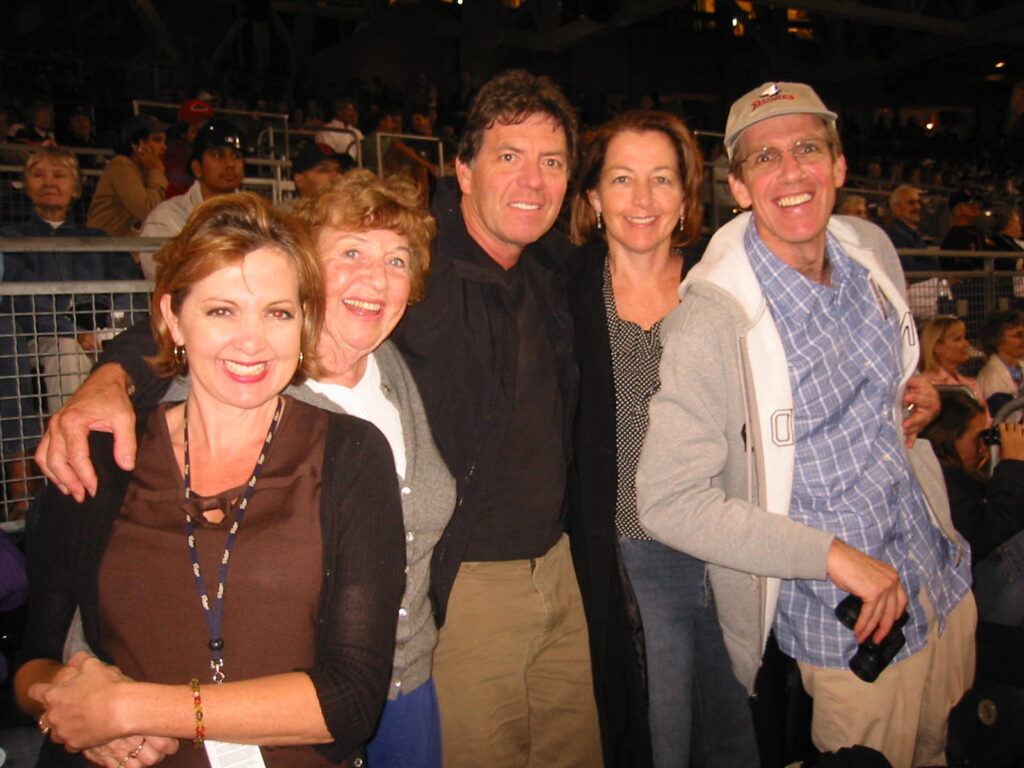