Amid a calamitous pandemic that has strained his relationships with fellow Democrats in the Legislature and given momentum to a Republican-led effort to throw him out of office, Gov. Gavin Newsom is trying to pull off a political balancing act as he begins his third year leading California.

He wants to help the poor, but not add burdens on the rich. He wants to reopen schools, but avoid clashing with powerful teachers unions. He says universal health care is his goal, but he dropped plans to provide government-funded insurance to low-income undocumented seniors.

Even as Newsom described soaring revenues that have put the state on much stronger financial footing than officials predicted earlier in the pandemic, he seemed to follow the mantra of former Gov. Jerry Brown — paddling a little on the left, and a little on the right.

“While we are enjoying the fruits of a lot of one-time energy and a surplus… it’s not permanent,” Newsom said Friday as he introduced a record-breaking $227 billion budget proposal that will launch months of negotiations at the Capitol. “We have to be mindful of over-committing.” 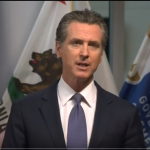 Paddling right, he rebuked progressive calls for new taxes on the wealthy — those are “not part of the conversation,” the governor said — and proposed more tax credits for businesses that stay in California and create full-time jobs.

Paddling left, he said “there’s urgency to get money into people’s pockets” and laid out plans to send $600 stimulus checks to 4 million low-income workers, including undocumented immigrants.

Though Newsom stuck to policy during the two-hour long presentation, at times he appeared attuned to recent political threats, working to shore up relationships with Democratic lawmakers and thwart accusations of hypocrisy.

Supporters of a GOP-led recall attempt say they have two-thirds of the signatures needed to put the question on the ballot. Their effort gained steam after news broke that Newsom celebrated a lobbyist friend’s birthday — unmasked — at the opulent French Laundry restaurant in Napa Valley, while admonishing Californians to mask up and avoid socializing for fear of spreading the coronavirus.

Newsom seemed determined not to repeat such a gaffe over the COVID-19 vaccine. Even as he announced plans to accelerate the pace at which Californians are being vaccinated, Newsom insisted he will not get the shot any sooner than other healthy people his age.

“I don’t think that will sit well with people,” the 53-year-old governor said. “And I am happy to wait my turn.”

Recall supporters are also hammering Newsom for a pandemic response that has shuttered many schools, businesses and churches. His budget rollout included extra emphasis on grants for small businesses and $2 billion in incentives to reopen schools.

But it does not require schools to reopen based on specific public health metrics, causing some superintendents to complain that labor unions, community groups or school boards could block them from reopening campuses. Newsom, who won office with the help of organized labor, said he’s committed to a “collaborative framework” that empowers unions. He hinted that a forthcoming proposal would give the state a stronger role when unions and school boards can’t agree on a reopening plan, but he did not disclose details.

Teachers immediately pushed back. “We are in the middle of a devastating COVID-19 surge, and any discussion of returning to in-person instruction is premature,” said a statement from California Federation of Teachers President Jeff Freitas.

The governor also withheld details on two other issues that have become high priorities amid the pandemic — expanding broadband service in rural and inner-city areas, and extending the amount of time tenants have to eviction if they can’t pay their full rent. Some 2 million Californians could be evicted on Feb. 1 unless the deadline is extended. Newsom said he’s working with legislative leaders on a plan and wouldn’t divulge details until they’re closer to agreement.

That displayed a different kind of balancing act Newsom is working to pull off — not between left and right, but between his own power and that of the Democratic-controlled Legislature.

“The governor is having to do a balance because the Legislature has given him feedback that we want to be part of these discussions,” said state Senate leader Toni Atkins, a San Diego Democrat.

“You’ve heard reactions in the past when members felt like that wasn’t always the case.”

Lawmakers fumed in the spring and summer when they felt the governor had left them out of the loop on the pandemic response. Things seem to be going more smoothly for now. Newsom’s staff began briefing lawmakers on key aspects of the budget last month, said Sen. Nancy Skinner, a Berkeley Democrat who chairs the budget committee.

Hearings will begin this week, and legislative leaders were optimistic they’ll be able to pass portions of the budget addressing the most pressing effects of the pandemic — school closures, small business assistance and eviction protection — long before the normal budget deadline in June.

That’s not because Newsom faces the possibility of a recall, Skinner said, but because lawmakers are hearing from constituents who want swift action on those things.

“Independent of any type of external political efforts, many of us feel good that he has responded to what we know Californians are saying to us,” she said.

Republicans lack enough seats to influence the budget process but criticized Newsom’s plans: too much spending on electric vehicle incentives, too little emphasis on ensuring people who lost their jobs get their unemployment checks, too loose on school reopenings.

The ultimate test: Back to in-person classes

“Schools must open safely regardless of the demands of the adults involved,” said a statement from GOP Sen. Jim Nielsen of Tehama. “There is no equity when private schools are open, and public schools are not.”

It appeared to be a veiled jab at Newsom, whose children attend a private school that reopened in the fall when infection rates were low, even as surrounding public school students were stuck at home on Zoom.

The inequities and the ongoing school closures — most public school students haven’t been inside a classroom in 10 months — have prompted some Democrats to push back too. Several Democratic lawmakers whose children attend public schools wrote a bill that would require schools to open when local public health authorities allow them to. (Most public schools are not allowed to open now because infection rates are so high, but many did not open when rates were lower in the fall, even though health orders allowed it.)

“The governor is moving in the direction that we would like to move in, which is trying to figure out how to reopen schools,” said Assembly member Phil Ting, a San Francisco Democrat.

But districts still need more direction from the state, he said.

The range of factors involved in reopening schools — curbing infection rates, getting teachers vaccinated, negotiating agreements between unions and districts that are at odds, creating a statewide standard that still respects local control — may prove to be Newsom’s most challenging balancing act of all.