The Golf Course Water Recycling and Turf Care Facility, a long name for a project with multiple facets, and holiday events were among the topics discussed at the brief Coronado City Council meeting that happened to fall on election night, November 3, 2020.

Coronado Goes Ghostly 2020 was a smashing success as described by the city’s Senior Management Analyst Kelly Purvis. Even though Halloween looked different this year, many little goblins got to enjoy COVID-safe events. The city and Coronado MainStreet hosted a trick or treat drive thru event. For the village drive-thru, 278 families registered with 690 goodie bags given out. In the Cays, 113 families registered, and 405 kids received goodie bags. There were social media photo contests, with a kid’s category featuring babies to teens; chilling to charming carved pumpkins; dogs got in on the action for the pet photos; haunting homes showcased decked out golf carts and houses; group photos included everything from witches to a skeleton family. Entries for the Turkey Coloring Contest, presented by the city and Coronado Junior Woman’s Club, are due by November 5, and can be downloaded from the website. To see all the festive photos, visit the city’s Recreation Holidays 2020 page.

Upcoming holiday traditions, like the Holiday Parade, Snow Mountain, Breakfast with Santa, Ride the Lights bike ride, and the Community Band Concert will all be cancelled this year due to the pandemic, but City Manager Blair King said that the city and Chamber of Commerce are working on other safe celebratory events for the community. Stay tuned for details.

The much discussed Golf Course Water Recycling and Turf Care Facility Project was the longest discussed agenda item and was presented by Director of Community Development Rich Grunow, who detailed the history of the project, which began back in August 2011 when a recycled water feasibility study was present to the city council. Fast forward to March 2019, the council directed staff to start the California Environmental Quality Act (CEQA) process. Several community forums were held to inform residents and hear their views and most recently, story poles were installed for visualization of where the buildings would be and their height. In September, a draft Mitigated Negative Declaration (MND) was released for a 30-day public review period, during which 39 comment letters were received and responded to.

The draft MND considered cultural and tribal cultural resources, geology issues, noise factors, biological resources and made mitigation recommendations for these issues. There have been a lot of public comments on this issue with eight detailed letters submitted and six residents speaking during public comments at this council meeting. One of the main concerns has been a request for an Environmental Impact Report (EIR) to which Grunow said that the CEQA did not indicate its necessity and all potential impacts will be mitigated. City Attorney Johanna Canlas spoke up and said that the CEQA is adequate to evaluate the environmental impact and the comparison with other cities is not valid, because each project is evaluated on its own merit with a two-prong process.

When councilmember Heinze asked about the final geotechnical report, Director of Public Services and Engineering Cliff Maurer responded that the company awarded the design/build contract will re-evaluate in the process of completing a final design which will come back to city council for approval. When he asked how the project was being funded, King replied, “The Golf Course Water Recycling and Turf Care Facility Project is an enterprise activity that will be primarily paid for by the Golf Course operations and by Cal Am Water, who will be purchasing up to .25 MGD, or millions of gallons per day, which it will resell to Coronado for the purpose of watering parks and landscape medians. The purpose of this project is to drought-proof the golf course without using potable water.”

Mayor Bailey said, “I feel confident that staff has responded to all of the public’s concerns.” Councilmember Donovan agreed that all the issues have been addressed and a full EIR is not needed. Councilmember Sandke commented, “Staff has been working on this for 10 years and went the extra mile with the story poling. They have done a great job to create a solid project and I have every confidence that this is the right time, right project for the right reasons.” He is pleased that the golf course will get a much-need turf facility and joked that a bonus would be the “removal of the tree on par five that I always seem to hit.” Councilmember Benzian added, “This is a strong project and an asset to keep our parks green which helps the city, region, and the state.”

Items of note on the Consent Calendar included awarding nearly $200,000 for the Mathewson Park playground renovation project to R.E. Shultz, Inc. The final design was approved by the council in August. The project is slated to begin construction mid-December, with an anticipated early March reopening. 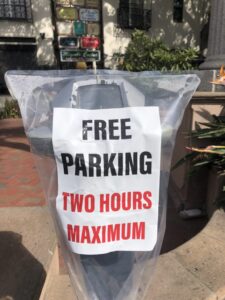 The new Special Event Permit Fees and Parking Enforcement Programs were adopted with a second reading. The city has already bagged off the parking meters and free parking has begun, for set time limits, with the new LPR technology ramping up in January 2021.

Councilmember Benzian put forth a proposal to explore studying the feasibility of a year-round application-enabled demand-responsive free transportation system like the downtown San Diego Circuit. He said that, “the goal is to see if such a program could be a service to allow seniors and others who find it difficult to head up town to shop and enjoy Orange Ave. It could also help to alleviate parking problems and assist in mitigating our carbon footprint, with an eye toward helping our residents better enjoy our town, limit traffic, help parking, and improve the environment.”