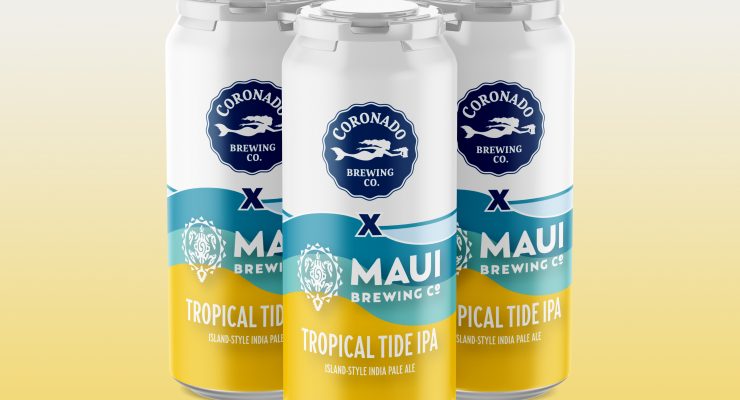 Coronado Brewing Company and Maui Brewing Company teamed up to brew one of the hottest new styles in craft beer. The Island-Style IPA, semi-recently coined in the craft beer world, is an IPA that captures the elements of a hazy IPA (i.e. tropical, juicy), but finishes clear, bright and crisp from the use of Cal Ale yeast. Post-boil, it’s loaded with New Zealand and west coast hops including Mosaic, Waimea, Motueka, El Dorado, and Chinook giving the beer super juicy, fruit-forward flavors of pineapple, mango, stone fruit, citrus, and pine. “We wanted to brew something that people could drink on the beach and feel like they were on vacation,” says Mark Theisen, Head Brewer Coronado Brewing Company. “We ended up with perfectly bright, clear, and gluten-reduced beer that’s great for drinking along the coast in SoCal or Hawaii.”

The 15-year friendship between the two breweries and their respective owners, Rick Chapman (CBC) and Garret Marrero (MBC), has prompted multiple collaborations. In October 2012, the breweries teamed up on a Hibiscus IPA in support of Breast Cancer Awareness Month. A portion of proceeds from that beer was donated to Beer 4 Boobs, a Susan G. Komen 3-Day walking team headquartered at San Diego-based yeast production company, White Labs.

This year’s brew was a first for the two breweries as, due to COVID19 travel restrictions, the entire collaborative effort was accomplished via Zoom, Facetime, and over the phone. Maui Brewing’s Brewmaster, Kim Brisson-Lutz adds, “We have grown so much as brewers since the original collaboration eight years ago. It’s through these times of separation (albeit also an ocean apart), we still come together to share knowledge for creating a beer that we both can be proud of.”

Tropical Tide IPA debuts at Coronado’s three locations on Friday, October 2. The beer will be available in 16oz can 4-packs and on draft, throughout Coronado’s distribution network. For more information about Tropical Tide IPA, visit www.coronadobrewing.com. Stay Coastal. Cheers.

The City of Coronado has been receiving complaints that a few Coronado restaurants are not complying with San Diego County's restrictions on onsite dining/seating....
Read more
Dining

The Henry Coronado Offers 25% Off on Tuesdays for #TakeoutTuesday

As a thank you to their guests for continued support during an especially tough year, The Henry Coronado is offering 25% off online orders every...
Read more
Business

We know you want to show your support to Coronado restaurants, especially when they are limited to offering only take-out service, but what to...
Read more
Dining

Due to COVID, the Old Goats and Kids Who Care have modified their annual salute to the wounded warriors for 2020 to include other...
Read more
Dining

Discover Coronado Coming to the Aid of Local Restaurants

In a unanimous decision on December 3, the Advisory Board of Discover Coronado approved a new community initiative that addresses the urgent need for...
Read more
Dining

The pandemic has undoubtedly shaken up business at most restaurants. Coronado's Tent City Restaurant used this time as an opportunity to make improvements. Preston...
Read more