This is the first in a series that will take an in-depth look at the Coronado Police Department covering traffic stops, use of force and body cams, mental health calls, as well as programs, statistics, policies and community involvement. With tension mounting on a variety of fronts in the world right now, Chief Chuck Kaye welcomed the opportunity to share details on how the CPD serves and protects the City of Coronado.

Being pulled over in your car for a traffic violation is what most people’s impression of police is based on. Coronado Police Chief Chuck Kaye shares, “It’s all about the approach and delivery to set the stage for a positive exchange.”

During a traffic stop, Chief Kaye makes a point to introduce himself and inquire how the person’s day is going and then asks if they realize they were speeding or had not stopped for a stop sign. Often, it’s someone in a hurry on their way to work. He then has to decide if a written warning is sufficient and may trigger a behavior change, or if a ticket is needed for a flagrant violation. He concludes the interaction with a statement along the lines of, “From now on, I’d appreciate it if you’d respect the community who is watching both you and the police to obey and enforce the rules.”

“Officers need to remember that we are accustomed to being in uniform, but not everyone has that same comfort level, so we must be cognizant of what we represent,” he says.

Chief Kaye has led the department since October 2018, after leaving the San Diego Police Department, where he had spent his career. He was considering retirement, but was not quite ready for that phase. “I jumped at the chance to join a great community and carry on the tradition of the CPD,” he comments.

CPD places an emphasis on the neighborhoods, focusing on crime, quality of life, traffic, and safety. Officers get out of their cars and walk on a regular basis. They patrol the Ferry Landing, downtown, the village and Cays, Grand Caribe Shoreline Park, and more. This is to monitor for safety, as well as to demonstrate approachability.

Chief Kaye acknowledges that our community is different than many, due to a variety of factors, including the enormous Navy presence, the large number of both long time and part-time residents, visitors/tourists, and proximity to the San Diego-Coronado bridge and the Mexican border. CPD Officers are assigned to a variety of duties including responding to radio calls, medical needs, noise complaints, crime, domestic violence, mental illness, wildlife rescue, and a multitude of other items that come up on a daily basis.

With a department of 46 sworn officers, 18 support and professional staff, and 40 volunteers, including Senior Volunteer Patrol (SVP), Reserve Officers and Cadets, the CPD is the smallest municipal police department in San Diego County.

The department is comprised of: 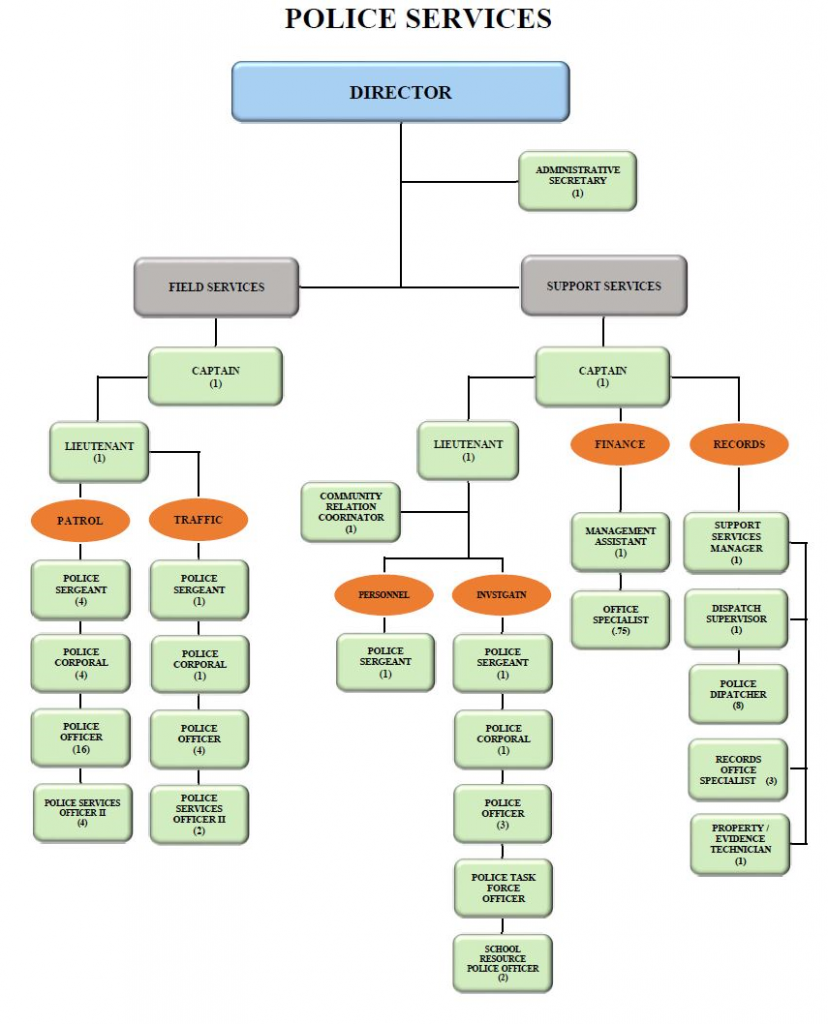 What does it take to get hired as a Coronado police officer?

For the hiring and selection process, the City of Coronado conducts pre-application screenings to encourage applicants who match the department’s style of policing and to discourage applicants not aligned with those values.

Coronado Police Officers need a POST certificate from a California POST Academy. The California Commission on Peace Officer Standards and Training (POST) was established by the Legislature in 1959 to set minimum selection and training standards for California law enforcement. Training at POST basic police academies runs around 1000 hours. The training requires all peace officers to have 40 hours of perishable skills and 24 hours of continuing education every two years. This does not include training for specialty positions such as detectives, traffic, narcotics, etc. Coronado officers generally complete double those training hours.

Police screening is intense to ensure getting qualified candidates, starting with a psychiatric evaluation, criminal and social background check, emotional intelligence determination, verification with friends and neighbors, polygraph test, and more. Chief Kaye says that the police academy wants cadets to be successful, so they check for any red flags before they are allowed into the program, and most go in expressing the goal of helping others.

Police training is specific to each state with its own rules; so for example, police officers in New York or Florida have very different training standards within their state. All California officers are exposed to the same scenarios to enact similar enforcement, so they are on the same page when dealing with situations. Chief Kaye highlights that training has changed in the last five years, moving from how to do things in a specific way by the book to now incorporating a layer of thought and compassion into each interaction. CPD also keeps up on federal laws and regulations.

With so many areas in law enforcement, a variety of specialized training is offered on an ongoing basis. For example, to be part of the new Motor Unit program, it takes three weeks of intense training.

When looking at a demographic comparison of the sworn CPD police officers, the ethnicity closely mirrors the makeup of the community, with 73 percent White, 16 percent Hispanic, nine percent Asian, two percent Black, and three percent other.


The workforce consists of about 20 percent women sworn officers, believed to be the highest percentage of female officers of any police agency in the region, and about 25 percent of sworn officers representing various minority groups.

The CPD Cadet Program currently has four high school students that participate in ride-alongs, assist with traffic control, and attend a mini police academy at UCSD. Chief Kaye says that some become cadets because they want to go into law enforcement, while others sign up for the experience.

Getting kids to connect with police officers is one of the goals of the CPD, who places an emphasis on involvement in the Coronado schools. Even though CPD runs a lean organization, they have two dedicated School Resource Officers (SRO), Officer Meghan Nankivel and Officer Grace Del Bagno, who rotate through all the campuses. Grace and Meghan, as well as other officers, strive to create a foundation and connection with kids in the schools.

The SROs provide administrative assistance, conduct drills like county wide active shooter drills in coordination with the Department of Defense (DOD) Police and San Diego County Sheriff’s Department, they assist with fire drills, attend football and other sporting events, and help coordinate the Every 15 Minutes Program, which challenges high school juniors and seniors to think about drinking, driving, personal safety, the responsibility of making mature decisions, and the impact of those decisions on others.

At CMS, Coronado Police are involved with the sixth grade Drug Store program, put on in conjunction with a variety of professional organizations. The event showcases dramatic presentations to raise awareness of making healthy lifestyle choices and consequences related to drug and alcohol abuse. They also conduct the Gang Resistance Education And Training (G.R.E.A.T.), an evidence-based and effective gang and violence prevention program, intended as an immunization against delinquency, youth violence, and gang membership. While Coronado doesn’t have all of these issues, the curriculum provides an opportunity to build relationships and provide life skills for students in dealing with peer pressure and other issues they may encounter.

I asked Chief Kaye his thoughts on the reasons people want to become police officers. He has observed that some officers are following a family tradition, while others have different careers in mind like he did, and when they discover helping others and making a positive difference in people’s lives, they veer into the police academy. He said it’s a mixed bag where people come from. He has met lawyers, businessmen, and many military members who are now police officers.

“Like many professions, it’s important to have the right mindset to do this job. You need to understand that being a police officer isn’t always the easiest, because it involves odd and long hours, often working holidays, and you don’t always see the best of human nature,” points out Chief Kaye. There are not many rookies on CPD, in part because experience is needed to respond to critical bridge incidents.

Officers who come here from other departments appreciate the difference in Coronado because they have:

To address the current issue of mask enforcement, Chief Kaye noted, “In Coronado, the City has focused on education and mask giveaways. Officers are authorized to use their discretion regarding the need to write a ticket.” He said that to date, CPD officers have not encountered a person refusing to put one on, when reminded by officers. He did point out that a violation of Government Code 8665 (Emergency Services Act, Penalties) could bring up to six months in jail and/or up to a $1000 fine if enforcement is mandated.

Chief Kaye said the department continues to be appreciative of the community involvement and support, and when we get through the COVID-19 era, ride-alongs will be reinstated.

It is the goal of the Coronado Police Department to be a professional and compassionate law enforcement agency, integrated into the community, emphasizing the values of trustworthiness and service. He has confidence that CPD officers daily strive to treat everyone in a fair and respectful manner.

He said that it’s important for him to have his officers demonstrate the ability to talk to people; it is vital for them to make connections which makes tremendous difference in most interactions.

“We work hard to ensure we share information via Nixle and social media. We are responsive to community concerns and comply with all requirements by posting our policies and other information online,“ he comments.

Next in the series: use of force, 8 Can’t Wait, body-worn cameras, traffic stops, and other programs, statistics and policies.