Shakespeare's lightest and most delightful comedy 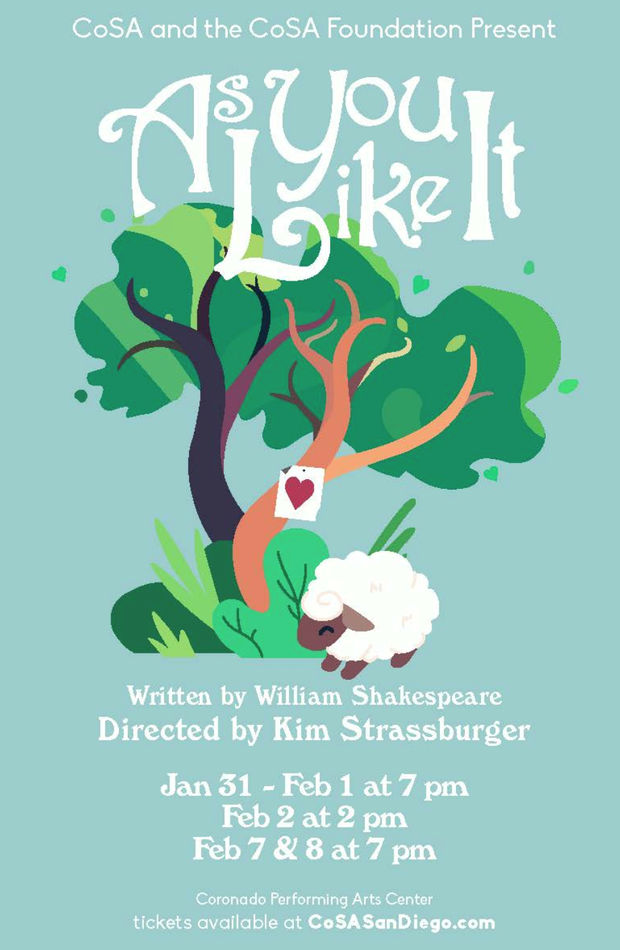 A celebration of the enduring power of love in all its many disguises and one of the Bard’s most popular comedies, As You Like It tells the story of Rosalind and Orlando’s famous courtship played out against a backdrop of political rivalry, banishment and exile in the mysterious Forest of Arden. Beginning January 31, 2020, Coronado School of Arts brings this witty, playful and utterly magical story to life with fun for the whole family.

This classic tale is about mistreatment among family members but also young love. Orlando (Kaia Bugler) is treated like a peasant by his elder brother, so he decides to stand up for himself. He realizes he must leave his home and go to the forest where a banished Duke (Gavin Hamby) is now living because Duke’s own brother pushed him out of his home. Celia (Jessica Garcia) is living with her uncle and cousin Rosalind (Bella Weesner), but when Duke decides to banish her, the cousins both leave together. Hiding out and living like peasants, the two cousins decide that Rosalind should dress like a young lad for safety. Little do they know that they will find frothy, fantastic fun in the forest, including love.

“This delightful and romantic romp pays tribute to the wild possibilities of romantic love,” according to director Kim Strassburger, of CoSA’s award-winning Musical Theatre & Drama conservatory, “even as it winks at the irresistible impulse to listen to our hearts rather than our heads.”

The 570-seat Coronado Performing Arts Center Main Stage Theatre, located at 650 D Avenue, is the venue for this satirical comedy with performances on January 31 (7pm), February 1 (7pm), February 2 (2pm), February 7 (7pm), and February 8 (7pm). Tickets are available at the box offices 45 minutes prior to performance or online at https://cosasandiego.com and range from $10-$20.