If you would like to learn more about this touching story and the World War II Servicemen’s Correspondence Collection from San Diego State, be sure to attend the Coronado Historical Association’s  Wine and Lecture series event on January 10 at 5:30 pm. Lisa Shapiro will discuss the letters and her book, No Forgotten Fronts: From Classrooms to Combat, and the unique Coronado connections.  Tickets are available at coroandohistory.org, by calling 435-7242, or visiting  Coronado Historical Association’s Museum Store at 1100 Orange Avenue.

Something special happened at San Diego State during World War II when professor Dr. Lauren Post asked his students who were sent to war to write to him. Many students complied, beginning their letters with, “Dear Doc.” Historian and author, Lisa Shapiro, first discovered the letters several years ago when they were mentioned on a PBS special on the war. At the time, Shapiro was studying literature and writing, with an emphasis on war literature. Over the course of two and a half years, she read through 5,000 letters, taking another few years to compile them into her book, No Forgotten Fronts: From Classrooms to Combat.

Doc, or Dr. Lauren Post, was a geography professor at San Diego State University and a veteran himself. He served aboard ships during World War I. With his role as mentor and confidant, as well as his past war experience, many students felt more comfortable writing to Dr. Post about the detailed aspects of war life. Lisa Shapiro believes, “Often, they didn’t want their families to know about the hardships of war, but they could unburden themselves to Dr. Post.”

Dr. Post. compiled the letters into a monthly publication, The Aztec News Letter, that reached San Diego State sailors and soldiers across the globe, as well as their families at home. The newsletter included excerpts from the latest letters as well as updates on rank, awards, and the status of students as he received them. The Aztec News Letter became a lifeline for the men and women in service, helped those far from home connect with each other, and kept their families and friends updated with the latest addresses and news.

Many of the stories contained within these letters inspire Shapiro today. Although she does not have a favorite correspondent or story, she is particularly moved by the story of the brothers Wally and Ernie McAnulty. Both were in service, but Ernie was captured. In his active duty status, Ernie could not write directly to his POW brother, but the brothers kept in contact via Dr. Post and The Aztec News Letter.

Another poignant letter was from Herman Addleson, in which he describes his last view of the United States as he sailed out of New York. Herman, a friend of Coronado resident Tom Rice, lost his life parachuting into Normandy on D-Day. Shapiro notes, “His description of his last view of the United States, and the tributes that his friends shared in the newsletter, always bring tears to my eyes.”

Coronado resident Sgt. Tom Rice, a member of the 501st Parachute Infantry Regiment, which was part of the 101st Airborne Division, wrote in detail about his battle experiences that began with D-Day on June 6, 1944. He was wounded at the Battle of Bastogne, recovered in hospital for four months, and continued through the Battle of the Bulge, and ended within sight of Hitler’s Eagle’s Nest. Recently, Rice participated in a parachute jump into France to commemorate the 75th anniversary of D-Day. Rice still resides in Coronado and has given his parachute uniform and boots to the Coronado Historical Association, to be preserved for future generations.

Local connections to WWII abound here in Coronado. San Diego was home to the Navy’s Destroyer base, Consolidated Aircraft established a factory here, and San Diego State took part in the Civilian Pilot Training Program. Shapiro says, “This is the story of World War II from the viewpoint of articulate young men and women from our area.” 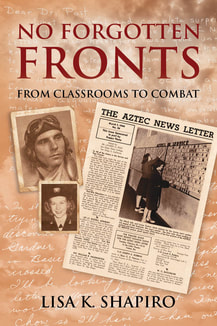 If you would like to learn more about this touching story and the World War II Servicemen’s Correspondence Collection from San Diego State, be sure to attend the Coronado Historical Association’s  Wine and Lecture series event on January 10 at 5:30 pm. Lisa Shapiro will discuss the letters and her book, No Forgotten Fronts: From Classrooms to Combat, and the unique Coronado connections.  Tickets are available at coroandohistory.org, by calling 435-7242, or visiting  Coronado Historical Association’s Museum Store at 1100 Orange Avenue.

It was a recon operation this week at the Hotel del Coronado as WWII Veteran Tom Rice prepares to recreate his historic jump into...
Read more
History

By Mary Farley, CHA Volunteer & GEM Committee Chair This article is the first in a series about CHA’s Going the Extra Mile Award. The Annual...
Read more
Community News

The Coronado Historical Association is dedicated to preserving our community’s special heritage and celebrating our past, present, and future.In that spirit, every year since...
Read more
Advertisement
Sponsored Partner Links