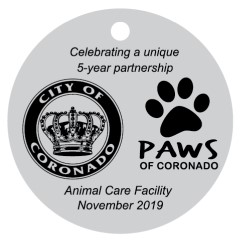 The City of Coronado invites residents and their well-behaved, four-legged friends to help celebrate its successful public-private partnership with PAWS of Coronado on Tuesday, November 12, at the Animal Care Facility.

To mark the 5-year anniversary of this unique relationship, the City will host an open house that includes raffle prizes, holiday pet portraits, giveaways, facility tours, musical entertainment and light refreshments from 4 to 5:30 at 1395 First St.

The City contracted with PAWS, a community-based nonprofit organization, in 2014 to manage and operate the City-owned Animal Care Facility, a task previously assigned to the Police Department. The City had experienced a significant change in its approach toward animals at its facility from holding animals until their owners could retrieve them to placing greater emphasis on the care and support of animals in the shelters.

“Our relationship with PAWS has created improved service levels and greater staffing flexibility for our Police Department,” City Manager Blair King said. “PAWS, in its capacity as an animal advocacy group, has been a natural fit for the Animal Care Facility.”

Under the agreement, the Police Department continues to be responsible for animal enforcement issues such as responding to dog bites, crimes involving animals, and animal nuisance complaints such as excessive barking and animals running loose.

PAWS of Coronado places 100 dogs and 100 cats in homes every year. Of the animals it processes annually, another 150 are returned to their owners. PAWS also works with other agencies including Sea World, Wee Ones, Project Wildlife to care for other animals such as birds, turtles, reptiles and sea mammals. With more than 100 volunteers, PAWS provides innumerable hours of personalized daily walks and petting. The organization has joined the San Diego Coalition for Animal Welfare that promotes that no animals in San Diego County will be euthanized for lack of space. Shelters work with each other to provide space for all animals. PAWS also focuses on animal education for service organizations and schools. 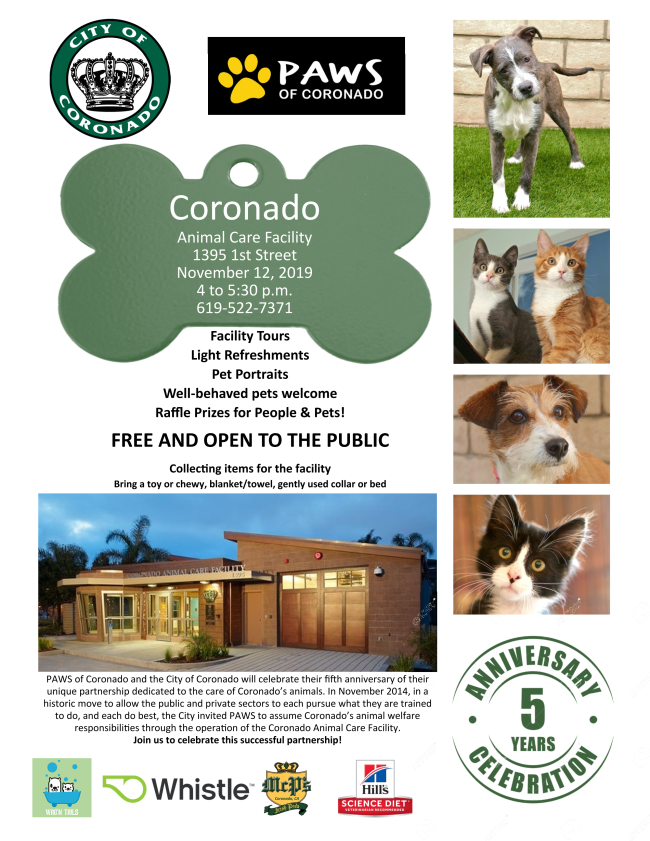 Coronado City Council member Marvin Heinze speaks about the very contagious coronavirus and how covering our face is one way we can help protect...
Read more
Community News

Spread of the novel coronavirus has caused the County of San Diego to be flagged by the California Department of Public Health, positioning the...
Read more
Community News

Whitney Benzian Encourages You to “Wear Your Mask” (Video)

Armchair Travel is Headed to the Emerald Isle on March 17

Dance Your Way To Health!

Add some joyful fitness to your day by taking a spot alongside fellow dance enthusiasts for either of the John D. Spreckels Center’s Line...
Read more
Community News

Free Lecture: Scientists & Society at a Crossroads: Seabed Mining in the Deep Sea

On Wednesday, March 4, at 2:30 p.m., the City of Coronado’s John D. Spreckels Center will be streaming a free lecture on, “Scientists &...
Read more
Sports

Tae Kwon Do Offered at the Coronado Community Center

Recreation and Golf Services is Hiring for Summer

The City of Coronado Recreation and Golf Services is currently accepting applications from qualified individuals interested in working with children. The hired staff will...
Read more
Advertisement
Advertise Here (Get Rates)