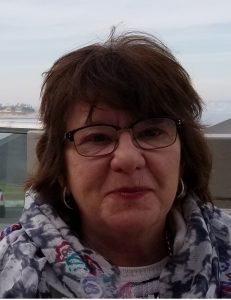 Mary T. “Mandy” Williams, who passed away on September 26th, was born in Durban, South Africa. She attended Covent Girls High School, and started nursing school at the age of 18 at St Augustine’s Hospital in Durban. During nursing school, she qualified as a nurse at Groote Schuur Hospital in Cape Town, which is an internationally acclaimed research institution, where the first human heart transplant was ever performed in the world in 1967. She married and had three boys, and was a stay-at-home mother. Andrew is now in London, David in Florida, and Mark in San Diego. She later married again to Huw Williams to whom she was married for 27 years. After raising the boys, Mandy returned to work, working in Hospice. She later went to Grey’s Hospital Pietermaritzburg, where she trained for Midwifery. Throughout her career, Mandy practiced in various nursing areas: Oncology, Orthopedics, Outpatient Surgery, Occupational/Industrial Nursing, Research and lastly ER. While she practiced Industrial Nursing at a few factories in South Africa, she won a JUTA Nursing Research Award before moving into ER Nursing at Umhlanga Rocks Hospital, prior to moving to the USA. Her first job in the US was in Yuma, Arizona as an ER/Trauma nurse. Later she moved to Palomar Medical Center, then Paradise Valley Hospital ER before completing the rest of her career at the Sharp Coronado ER. She started at Coronado’s ER in 2003 and worked until July of this year when she was diagnosed with lung cancer.

Mandy’s life was centered on her family, Huw and her sons, and her job. Sharp Coronado ER was like her second home. Mandy was an inspirational and accomplished nurse, being recognized for her dedication to nursing excellence and her commitment to helping her department. She has been the recipient of the Employee of the Month, Cord Award winner for our entity, and Center of Nursing Excellence for Mentorship. Consistent with her genuine interest in learning, teaching, and mentoring so many nurses throughout her career, her final wish was achieved with the donation of her body to UCSD for medical students and research. Peers knew Mandy as extremely hard-working, dedicated, selfless, courageous and caring. With Great Sadness, the Sharp Coronado Hospital and ER will miss her dearly. Following her death on September 26th, a beautiful Memorial Celebration was held with standing room only in the Hospital Auditorium on October 4th. Anyone that would like to honor her, please contribute to the Sharp Coronado Hospital Foundation* in honor of Mary T. “Mandy” Williams, for an ER room to be named after her.

He was the youngest of 13 children. With all those older siblings to influence him, it’s no wonder Tiger Johnson developed such an indelible...
Read more
Obituaries

The push is on in the County of San Diego to vaccinate for COVID-19 as quickly as possible. With hospitals at critical care capacity,...
Read more
Business

If you haven't read our previous articles, this writing is research, recent data, and news about the coronavirus throughout Coronado, California, and the United...
Read more
Advertisement
Advertise Here (Get Rates)