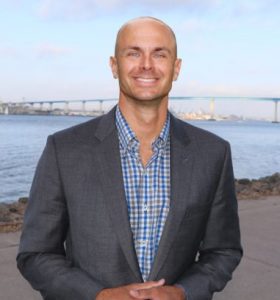 Coronado Mayor Richard Bailey has announced his intention to run for a second term as mayor in the 2020 election. Bailey, whose political career in Coronado began in 2012 when he was elected to City Council, made history just four years later by becoming the youngest mayor of Coronado at 30 years old.

Mayor Bailey explains his decision to run for another term as the opportunity to see through many of the initiatives that were implemented during his tenure.

I would characterize the last four years as a term of significant progress that sets the stage for major improvements. At the local level, we’ve followed through on campaign promises of better community engagement, enhanced traffic enforcement, and opposing wasteful spending. Regionally, we’ve pushed back on state policies coming at us from Sacramento, SANDAG, and even MTS.

We’ve seen the start of several great initiatives that will leave Coronado more financially sound, environmentally friendly, and with greater local control. I plan to see those initiatives through.

Bailey follows with specific examples of how the city has progressed under his leadership, citing improvements in public spaces and prudent financial negotiations to minimize city and ultimately tax-payer’s costs.

We negotiated a maintenance agreement with Caltrans to improve our streets and landscaping at their expense, we refinanced out of the Community Development Bonds which will greatly improve the budget situation for our schools. Undergrounding utilities is something that our community has talked about doing for decades, but we never took the first step — now community members have an option to underground their utilities with financial assistance from the city.

Regionally, we are finally going to receive our fair share of transportation tax dollars from SANDAG. Our voters approved a half-cent sales tax back in 2004 with the promise of a $25 million project to relieve traffic congestion on Third and Fourth Streets through a tunnel. Until this past budget amendment was passed, the SANDAG Board never put Coronado in their budget. That changed recently when, after building a coalition on the SANDAG Board, we were able to make our way into the budget.

I always keep in mind that the money we are spending belongs to the taxpayers. One of the biggest changes we’ve made to our budget process is holding annual budget meetings, where the City Council goes through the budget page by page. This provides taxpayers with greater transparency of where their tax dollars are being spent.

Despite the wins Bailey has influenced during his time in office, the position of mayor has not been without challenge. Bailey details some of the obstacles he has faced since 2016:

The state of California is implementing heavy-handed, one-size-fits-all policies in an attempt to usurp local control which poses a considerable threat to the City of Coronado.

We saw this most recently with the RHNA process, where the state, via SANDAG, saddled Coronado with an unreasonable number of homes that they expect us to build over the next eight years. We are pursuing four separate strategies to push back on this initiative which includes administrative remedies, legislative action, political pressure, and, if necessary, legal action. The state’s policies don’t stop where the bridge ends, so we need a united front to push back on these policies coming at us from Sacramento, SANDAG, and even MTS.

Because the position of Mayor pays a stipend of less than $1000 per month, incumbents must rely on other means of income to meet living costs. In addition to being mayor, Bailey has a consulting business brokering agreements and sourcing manufacturers within in the aerospace industry. Bailey, a graduate of Cal Poly San Luis Obispo, has been affiliated with the aerospace industry since 2010 when he worked for Goodrich Aerospace, now known as UTC Aerospace Systems. Bailey feels fortunate that he is able to prioritize his role as mayor:

I take a lot of pride in being as responsive and engaged as humanly possible, which has turned the responsibility of being the Coronado Mayor into a full-time job. While the stipend and benefits are appreciated, serving in this position is not about the paycheck, it’s about results, and it takes a full-time commitment to represent Coronado and achieve them.

In a final sentiment, Mayor Bailey summarizes his decision to run for another term as the Mayor of Coronado as a labor of love:

There’s no bigger honor than representing the place you call home and making a difference for the city that we all love. Everyone has a role in making our community a desirable place to live and I believe the best way I can contribute to our shared efforts is with one final term as mayor.

Mayor Bailey encourages Coronado residents to reach out with any questions, concerns, or feedback. He can be reached at [email protected]. Campaign related questions may be directed to [email protected]. To learn more, volunteer or donate to the Bailey2020 Campaign, visit www.richardbailey.com.