At a Meet & Greet on October 5, Ellen Miller, spouse of Vice Adm. Dewolfe "Chip" Miller, hosted "The League of Wives" author, Heath Hardage Lee, along with four Navy family panelists: Sid Stockdale, Patsy Crayton, Karen Butler, and Marie Estocin, for a discussion and Q&A with an audience of Naval spouses and local women. 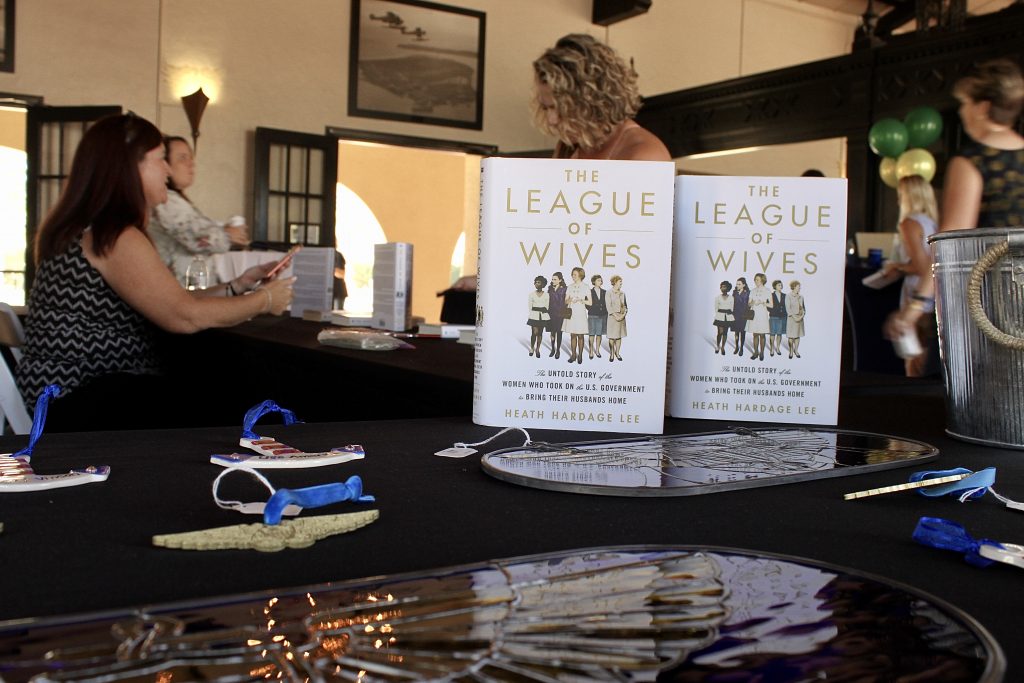 “The war we didn’t talk about.”

That’s how Ellen Miller described the way the Vietnam War wasn’t covered in most history classes. In her welcome address at a Meet & Greet on October 5th, Miller, spouse of Vice Adm. Dewolfe “Chip” Miller, expressed heartfelt admiration for the former Prisoner of War/Missing in Action (POW/MIA) wives and family members present.

One attendee, Tori Calisch, an active duty Naval Aviator spouse, declared it a deeply moving experience. “These women are truly American heroes. I am in awe of the courageous actions they took to bring their husbands home and the legacy these women left for military families going forward.” 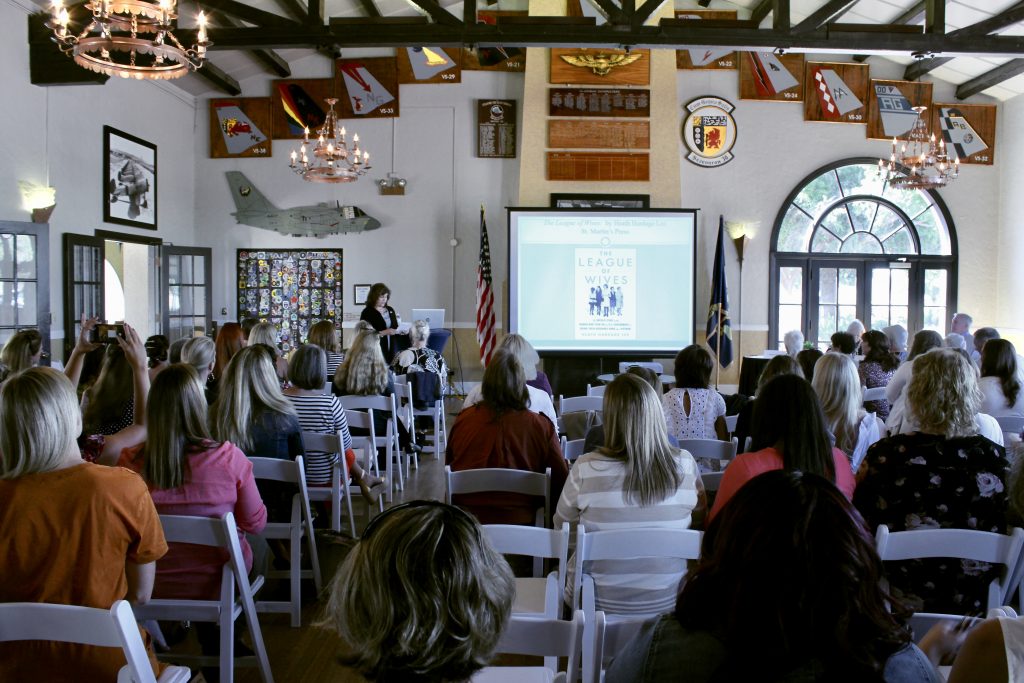 Sponsored by Lincoln Military Housing and the Naval Officers’ Spouses’ Club of San Diego, the event featured The League of Wives author, Heath Hardage Lee, and four Navy family panelists (Sid Stockdale, Patsy Crayton, Karen Butler, and Marie Estocin) whose poignant stories fill the pages of Lee’s book. While most accounts of the controversial Vietnam War focus on the grim experience of those veterans, The League of Wives chronicles the efforts of POW/MIA wives and their public campaign to bring their husbands home.

But not all would make it back.

Lee, who built a rapport with the POW/MIA families, moderated the panel discussion and provided context for the political climate and her book’s findings. She explained how these military wives empowered themselves to “Go Public” with the harsh and inhuman treatment of POWs and lack of information provided to MIA families.

And it all began at a dining room table in Coronado with the formation of The League of Wives.

“I wanted to set the record straight. Sybil Stockdale is the one who started this movement.” Lee said, referring to the murky beginnings of what would eventually morph into a larger national organization, The National League of POW/MIA Families.

Sid Stockdale, Sybil and Vice Adm. James Stockdale’s son, recalls the moment their family discovered his dad had been shot down. “It was a very emotional time because we were told he was missing in action.” Unsure if she was a wife or widow, Sybil received a letter from her husband seven months later. He was alive, but would remain a POW for seven years.

Another panelist and Sybil’s close friend, Karen Butler, discovered her Naval Aviator husband, Lt. Phillip Butler, was alive—five weeks after he was shot down. She found out while watching the TODAY show on television.

Playing an instrumental role in getting LOOK magazine to cover the POW/MIA wives, Butler says she never felt the pressure of the “Keep Quiet” policy that Lee describes in her book.

Another Naval Aviator spouse, Patsy Crayton, had a premonition on the day Lt. Cmdr. Render Crayton was shot down. She learned of his survival after someone identified him at POW camp. It would be five years before she received a letter from him through Cora Weiss, a controversial “peace” activist.

Crayton became a close confidant to Sybil Stockdale. The two women frequented the Hotel Del Coronado pool with Stockdale’s four boys. Crayton laughed when describing one incident where Stockdale disciplined two of her boys bickering, “it’s not fair!” at each other. Stockdale admonished, “Life’s not fair! And the sooner you find that out, the better off you are!” This moment earned a rousing applause from pool guests.

Of all the emotional and occasionally humorous stories told on Saturday afternoon, none could quite compare to Marie Estocin’s heart-rending experience. Lt. Cmdr. Michael Estocin was shot down on April 26, 1967. Devastated and shocked, Estocin was told not to “hold out hope” for her MIA husband.

Estocin would attend the Paris peace talks hoping for more information regarding her husband’s status. But the North Vietnamese delegation literally slammed the door in their faces.

Unlike the Stockdale family, who were not allowed to watch the “violent” news images, Estocin scoured them hoping to glimpse her husband’s face among the POWs. When she wrote a letter to Weiss in a bid to determine if her husband was among the list of POWs, the reply stated: prisoner not detained.

To this day, Lieutenant Commander Michael J. Estocin is still listed as Missing in Action.

Pat Mearns, a “cover girl” on The League of Wives book, was also sitting in the audience. An Air Force wife, her husband, Maj. Arthur Mearns, was also listed as missing in action. Later, it would be reported that he was killed in the crash. However, Mearns continued to be a driving force behind the MIA side of the movement with Sybil Stockdale.

At the conclusion of the panel discussion, the floor opened for a Q&A session to an audience filled with Naval spouses and local women.

One woman, a former Glorietta High classmate of the Stockdale boys, described how she wore their father’s name on her POW bracelet. Millions of these bracelets were manufactured and thousands returned when men, or their remains, were repatriated. Families revealed they are still being mailed, as one attendee acknowledged receiving a bracelet last week.

When asked about the process of repatriation, the former POW wives described the horrific physical conditions of their husbands. Crayton explained how her 6’ 2” husband weighed 140 pounds upon his return. Despite his emaciated frame, he had a large, hard lump stretching across his stomach. After a round of chemotherapy, he passed the parasitic worms he acquired while imprisoned in Vietnam.

Astoundingly, only two percent of the “Hanoi Hilton” prisoners were diagnosed with Post-Traumatic Stress Disorder.

The “tap system” and SERE (Survival, Evasion, Resistance, and Escape) training were considered to be the largest factor behind the low numbers. As for the POW/MIA children, daughters faired better, mentally and emotionally, than the sons. Sid Stockdale believes the absent father figure affected them more. 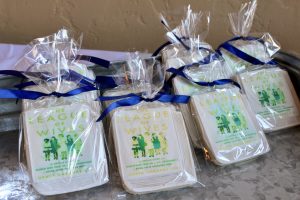 After the Q&A session, the author and four panelists signed books and spoke with attendees. The Naval Officers’ Spouse Club provided copies of The League of Wives, in addition to refreshments and snacks.

“I am ever so grateful for their bold strength in the face of life-shattering tragedy,” said Amy Miller, another Naval Aviator spouse (no relation to Ellen or Vice Adm. Miller). Describing the afternoon as “truly priceless,” Miller felt the experience exhibited the kinship felt across generations of Naval Aviator wives.

Learn more about “The League of Wives” exhibition currently on display at the Coronado Historical Association here.

Learn more about The League of Wives author, Heath Hardage Lee in her interview here.