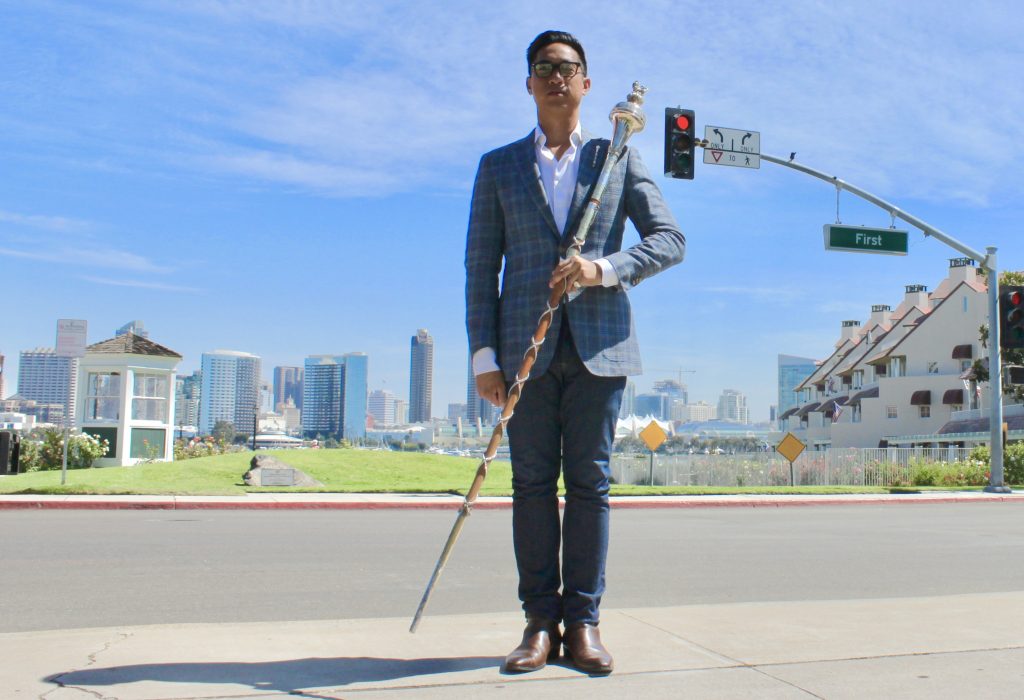 This summer, Paguio traveled with Canada’s Simon Fraser University Pipe Band Society to participate in the World Championships in Scotland. Competing against an elite selection of international drum majors, he clinched his fifth World Championship title, which includes a previous win in the Juvenile division in 2004.

Paguio, a Filipino-American, is the first internationally recognized non-United Kingdom citizen to win this prestigious award, a trophy commissioned a year before Queen Elizabeth II’s coronation in 1953.

Sponsored by The Royal Scottish Pipe Band Association with roots going back to 1930, the Drum Major competition winner accumulates the highest score based on uniform inspection, marching and deportment, and flourishing (performing tricks and throws; Americans refer to this aspect as “spinning”).

Influenced by his older brothers, Paguio first took to hold of the mace, a term used for the traditional staff carried by British/Scottish uniformed drum majors, while attending Chula Vista Middle School. Although he grew up in the greater San Diego area, Paguio maintained close ties with the Coronado community before taking up residence here.

Fascinated with Scottish culture, he sought employment at Celtic Corner/Scottish Treasures, owned by Tricia Logan-Locke. Paguio reflects on how he “loved the customers and staff that worked there because everyone was interested in their lineage.”

In addition to having worked on Orange Ave, Paguio played trumpet in the Coronado Community Band and often marched with a local pipe band in Coronado’s 4th of July parade, entertaining onlookers by throwing the mace over the light posts. Declaring that Coronado is “one of the best places to live in the world,” Paguio made the move to the island three years ago, saying he “always dreamed of living here.”

In 2006, he “stepped” into the role of entrepreneur by establishing the Regimental Mace Company with fellow drum major, Kenneth Misch. Designed “for drum majors, by drum majors,” its products are bespoke military devices and claimed to be the world’s first scientifically engineered maces.

According to the company’s website, they use Computer-Aided Design in the creative stage with their finished products providing optimal balance, durability, and sustainability. The standard Regimental Series Mace invokes old-world tradition topped with a golden coronet similar to Coronado’s legendary crown emblem.

Paguio reveals that his business is currently integrating with England’s largest producing mace manufacturer, AMMO & Company, which produces ornamental pieces for Great Britain’s Trooping of the Colours and the Edinburgh Tattoo.

At his previous position as Land Use Policy Advisor for the County of San Diego, Paguio worked on the “Building Better Roads Initiative” that united contractors, city officials, and industry experts on matters of recycled road material, constructing durable and cost-effective streets, and employing the latest technology to the county’s advantage.

This experience helped Paguio gain his February appointment with the Coronado Transportation Commission. Currently, they are in the process of combining with Bike Advisory Commission to form the Mobility Commission. He believes this merger will create a “more holistic approach [when] making recommendations for issues like bike lanes and traffic safety.”

He also discussed the Five Points intersection and how building a roundabout proved to be too costly a measure. Paguio thinks the commission’s decision to implement more signage and paint lane delineators, as well as future consideration of a pedestrian refuge island will alleviate some of the residents’ concerns.

There’s also the ongoing assessment concerning the city’s potential desire to take ownership of portions of Caltrans roads. According to Paguio, the commission initiated a feasibility study and is exploring how to financially manage the costs if the city decides to pursue control of those streets.

“Coronado makes it so easy to get involved with the community,” Paguio declares when asked why he chose to pursue the volunteer transportation position. “It’s such a unique place because the residents who get involved really care about the issues.”

When Paguio isn’t wearing tartan to Tartine (where we met up for this interview) or figuratively pounding the pavement for the city, he is busy forging connections with the business community. As President and CEO of the Asian Business Association of San Diego (ABASD), Paguio continues to build relationships with the organization’s 30,000 Pacific Islander and Asian business members. He ultimately hopes to see the ABASD “flourish” even more by reaching out and connecting to Coronado businesses.