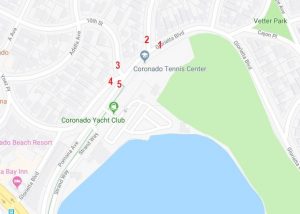 The commission discussed traffic calming plans for the Five Points area (the intersections of Glorietta, Pomona, and 10th Street). Clarification of the proposed plan from Principal Engineer Jim Newton was received and members voted unanimously to accept staff recommendations. The least costly and invasive modification to Five Points is to add painted lane markers and clearly marked pedestrian paths. These traffic calming proposals next need to be presented to the city council for discussion and final decision.

The planned widening of the sidewalk along Ocean Boulevard was also addressed. Certain sections of the sidewalk along the beach side of Ocean would be widened. A map of proposed areas to be widened is not yet available. There are no changes proposed to the residential side of Ocean Blvd. Long range Active Transportation plans include looking into costs and effects of reducing the size of the boulder barriers in both width and height. As with traffic calming proposals at Five Points, proposed changes to Ocean Blvd. will be placed on a future city council agenda for discussion and vote.

The one agenda item that promises to have consequences beyond the Transportation Commission addresses the California State Legislature’s revision of the FPPC (Fair Political Practices Commission) Conflict of Interest areas. On March 22, 2019 the Conflict of Interest areas increased from a radius of 500 feet to 1,000 feet. This change will greatly increase the areas that members of Coronado city committees, commissions and city council will need to recuse themselves from discussing and voting upon. Deputy City Attorney Lauren Hendrickson displayed a map of Coronado which detailed areas where the Transportation Commission members have a conflict of interest. These newly increased areas of conflict necessitated a few members to trade their working group assignments. Only member Cauleen Glass has a conflict in one area of the Cays. Those members who rent their abodes will not have significant areas of concern. An example of how the new regulations modified the areas of conflict for members of the Transportation Commission is shown below. 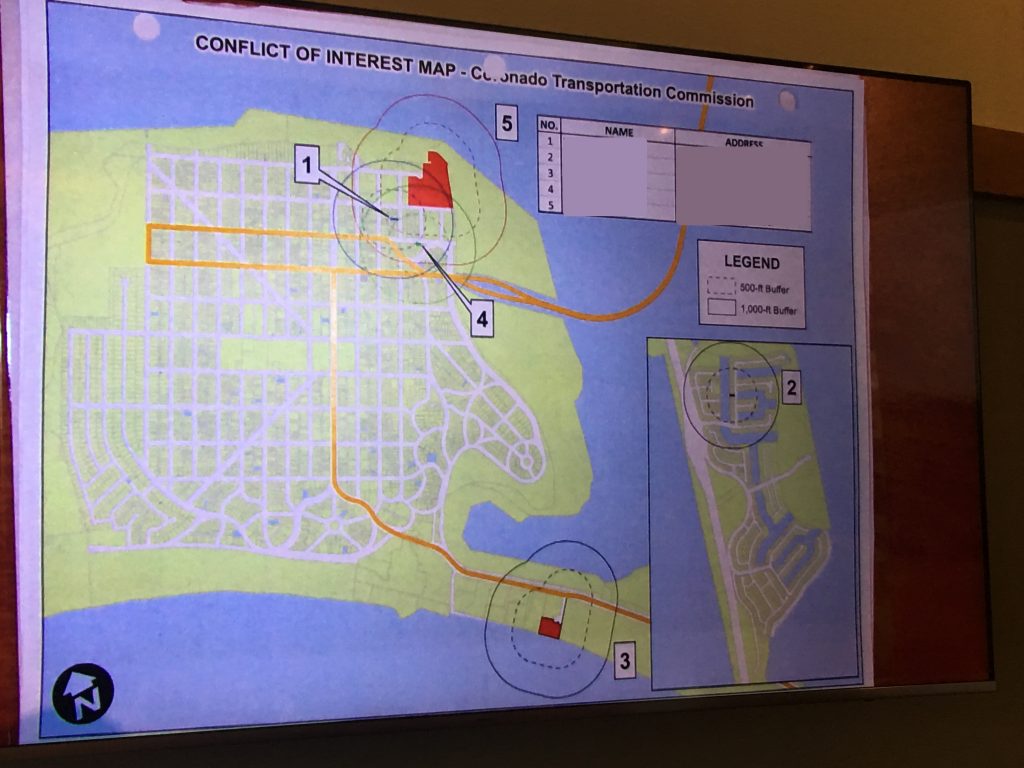 The new Conflict of Interest areas will have a great impact upon 2020 city-wide elections. Some eligible 2020 candidates may have several overlapping areas of conflict. Those elected to office will have limits imposed upon them when discussing and voting on city issues. Coronado residents will want to be informed of each candidates limits before voting. This could become a major deciding factor as to who gets elected.

The Transportation Commission is to be commended for their recommendation to the city council to improve the highway crossing safety at the entrance to the Coronado Cays. New bicycle path pavement markings and standing signage requests, warning of autos crossing the highway into the Cays received unanimous approval from our city council at their May 7th meeting.

The next Transportation Commission meeting will take place on Thursday, July 11, 2019.

Memorial Day weekend was spoiled by millions of gallons of raw sewage and toxic waste flowing down the Tijuana River, fouling the sands and...
Read more
Advertisement
Advertise Here (Get Rates)