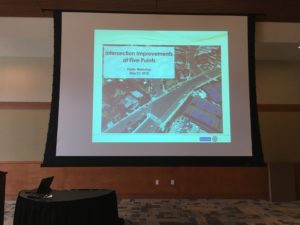 As Mayor Bailey shared on his Facebook page, the intersection of Glorietta, Pomona, and 10th Street is the intersection in Coronado for which he receives the most community opinions. “The five points at this intersection make it a nightmare to cross, especially during rush hour.” For this reason, the City of Coronado is addressing the safety concerns and evaluating the need and options for improvement. As part of the evaluation process, the community was invited to a public workshop on Monday evening wherein the current considerations and solutions were shared to those in attendance by Sean from PSOMAS engineering firm and Jim Newton, Principal Engineer, Public Services and Engineering for the City of Coronado.

About 20 residents showed up, 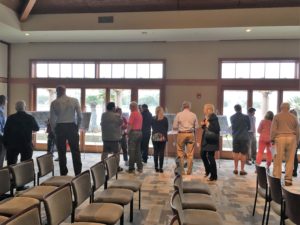 most of whom live in that area and would have their streets impacted by any changes. The first question raised by one of the attendees, “How many accidents have been reported at this intersection?” The answer is that in the past ten years there has only been one reported. The reason explained for this very low number is that because of the complexity of the intersection, drivers seem to slow down and proceed cautiously to avoid accidents. That being said, there is also the question as to whether any changes would work to reduce traffic backups during peak hours.

The attendees had the opportunity to look over the six proposed traffic revision sketches, two of which would include roundabouts.

All of the options reduced the number of parking spaces in this area, anywhere from the loss of two spaces up to twenty-two spaces. Another question raised was whether a roundabout would have adequate space for emergency vehicles and large moving vans to navigate safely. The Police Chief and Fire Chief both viewed and agreed that the vehicles would have the needed lane width. Vehicles up to 40 feet long would make it but larger tour buses would likely not. A resident shared that there are several large buses that travel this intersection daily. I asked about having additional stop signs and was told there would not be additional stop signs, only the relocation of those already there (should one of those configurations be chosen).

There is no city commitment to making any changes at this point; the issue is still in the investigative stages. A public comment form is on page 11 and 12 of this PDF file, and should be returned by May 31. If community members have input or questions, they are invited to reach out to Mr. Newton through email: jnewton@coronado.ca.us prior to May 31, 2018.

Coronado restaurants have shown resiliency during these past few months of the pandemic, and continue to now as they march forward into this next...
Read more
City of Coronado

https://youtu.be/_8Hd2mm1_osWith a prohibition on indoor dining, the City is offering restaurants options to continue serving patrons. Find out about rules relaxed in May for...
Read more
Community News