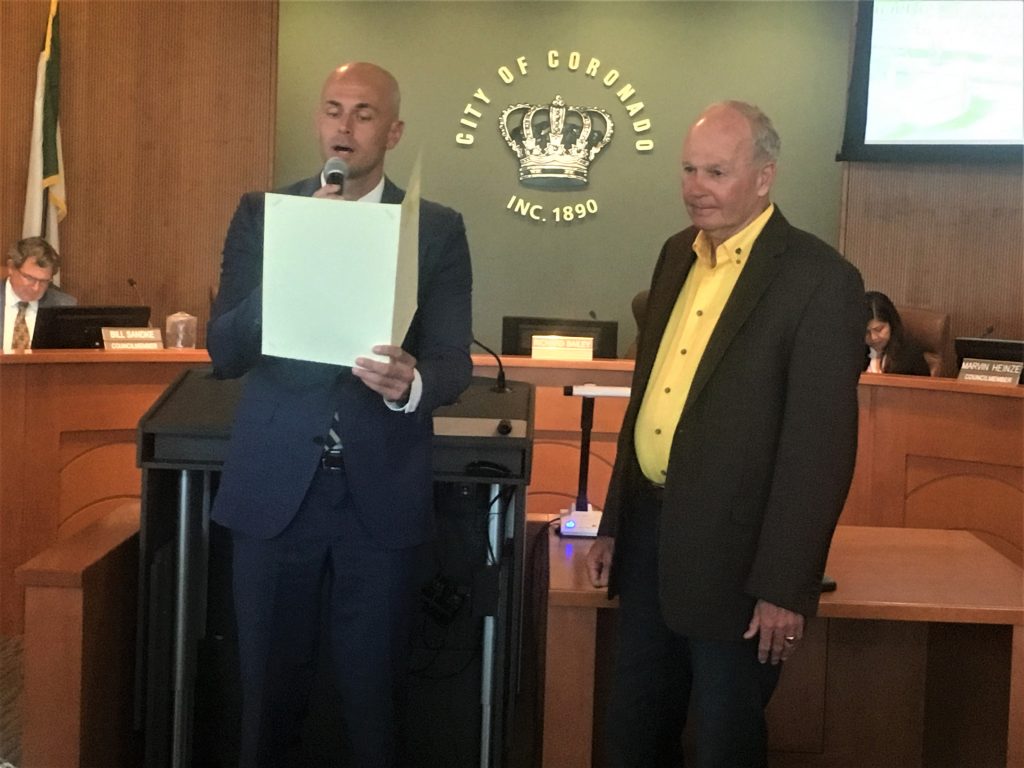 At this week’s lengthy City Council meeting, Mayor Bailey presented a proclamation to Dennis Dorman, President-elect, Optimist Club of Coronado proclaiming July 23 to 27, 2019 as “Optimist Coronado Sports Fiesta Week.” He noted that the Optimist Club supports a variety of community organizations, events and sports teams, as well as providing scholarships. Proceeds from this year’s 48th Annual Sports Fiesta help the youth in Coronado in a variety of ways. The event includes the longest continually running triathlon in the world, a 5K run, a one-mile rough water swim, and beach volleyball and lawn bowling tournaments.

The majority of the meeting was spent on the Port of San Diego’s Master Plan Update (PMPU). Senior Planner Jesse Brown presented the highlights of the letter that the City Council is sending to the Port expressing concerns regarding policy changes that will affect Coronado. The letter included 23 points ranging from the newly proposed 350 hotel rooms, 40-foot height limitation, dredging the waterways, adding vessel slips, wayfinding signage, 30-foot wide promenade, Glorietta Bay pathway, expanding ferry services, as well as other concerns. Seventeen residents, many of whom live on 1st Street, voiced their concerns regarding the Port’s initial proposal for the Ferry Landing and specifically noted the concerns of greater traffic and parking congestion that would negatively impact the community. Many felt that the City’s letter needed to include stronger language to indicate the extreme dissatisfaction of residents to the plan. Many speakers received a room full of clapping support from the audience for their remarks. Several of the speakers, including those from the Cultural Arts Commission, presented that a 300-500 seat Cultural Arts Center had been identified as a complement at the Ferry Landing from the 2018 Coronado Creates survey, but that suggestion received mixed reviews.

There were dozens of residents’ correspondence submitted on the Council blue sheets all expressing their concern over the proposed plan. One resident for the Coronado Public Safety-First Collaborative (CPSFC) proposed creating a “Legacy Team,” comprised of local architects, designers, developers, and property management professionals with environmental quality experience to help created a Ferry Landing redevelopment plan that would preserve the legacy of Coronado for future generations.

Several residents were critical of Garry Bonelli, the Port Commissioner, and Coronado resident and representative. All the council members adamantly advocated for Bonelli, saying that his is a volunteer position and as a resident he is working for the best interests of Coronado. They pointed out that he has been successful on several other fronts advocating for Coronado, especially in the Cays. Ultimately, the seven Port Commissioners will decide on the finalized plan, but city officials and residents can make their voices heard. The complete PMPU is available at www.portofsandiego.org/pmpu. Comments and concerns should be emailed to PMPU@portofsandiego.org or mailed to: Port of San Diego, Attn:  Planning Dept., 3165 Pacific Highway, San Diego, CA  92101. Comments need to be submitted within the 90-day review period for the draft of the PMPU which ends July 31, 2019.

The Council unanimously approved a resolution to oppose modifications to the 2004 TransNet Funds extension ordinance by SANDAG, which is seeking to repurpose the $25 million designated for Coronado. These funds come from a one-half percent sales tax designated to fund Regional Government Transportation. The 2004 TransNet vote provided $25 million of matching funds for construction of a tunnel from Glorietta Boulevard to Alameda Boulevard. The City Council previously requested that the $25 million be repurposed for congestion and traffic relief along arterial highways and roadways within Coronado. The most likely candidate is a crossing linking the Naval Amphibious Base ocean and bay sides. Mayor Bailey said this sends a message that Coronado will fight to preserve its fair share.

After some discussion, the Council unanimously approved the combination of the Bicycle Advisory Commission and the Transportation Commission to now be called the Mobility Commission. Combining these two advisory entities should result in a comprehensive approach to all future transportation planning.

A shout out to the oldest audience member, Julia Viera, 93-year-old resident, who petitioned the City several months ago with regards to maintaining the original scored sidewalks throughout the City.  She scored a victory as the City Council directed Director of Public Services and Engineering Cliff Maurer to adopt a policy going forward that when sidewalks are replaced, they must be scored to match the original sidewalks. Maurer gave a presentation on the history, safety and aesthetics of sidewalks and was happy to oblige this request.

The Council unanimously voted to advertise the Orange Ave Median Improvements Project for landscaping upgrades to the three medians adjacent to the Hotel Del from RH Dana Place/Adella Avenue through Pomona. This is a precursor to enhancing the medians in front of the Coronado Shores.

There was discussion from the public and among the Council regarding preventing right turns onto Palm Avenue from northbound Alameda Blvd. from 2 pm to 6 pm.   The Council unanimously voted on new turn restriction signs to be installed on Alameda that prohibit northbound traffic from turning onto Palm Avenue and cutting through residential areas. The City will monitor the area to determine if the turn restriction has shifted drivers to other local streets, such as Second Street. Mayor Bailey said, “Reducing cross-through traffic should improve safety in our neighborhoods and enhance our quality of life.”

The City will be sending out an Undergrounding Utilities letter to Village property owners in the next week. The packet includes information on how to form Utility Undergrounding Assessment Districts, a property owner petition, and a sample boundary map. There is a six-month period in which to respond. The city recently set aside millions of dollars to incentivize homeowners to underground utility lines throughout Coronado. The Mayor posted that “If you would like to underground the utility lines in your neighborhood and have the city match your investment dollar for dollar, keep an eye on your mailbox for the step by step guide from the city detailing how to move forward in the process.”

There was much discussion on the last agenda item which was conceptual improvements to the Five Points Intersection. This intersection has long been a source of driver confusion, but data shows that the accident rate is low, with only one accident per year.  Councilmember Benzian recused himself from this item as he lives in this area. Jim Newton, Principal Engineer, gave a presentation on the history of this project which began with a contract awarded to Psomas, followed by a traffic study, public workshops and BAC and CTC presentations. The intersection has approximately 14,000 vehicles, 286 bikes, and 500 pedestrians per day, with peak times from 7-8 am and 3-4 pm. Ultimately, after much discussion on several options which proposed added signage, striping, and speed bumps, the Mayor asked to continue this item until the September 3 meeting. Councilmember Heinze asked for cost estimates for the projects and Councilmember Donovan asked for downsides of the proposed projects to be identified. Residents in the area will be notified prior to the meeting and Councilmembers Sandke and Donovan will meet with Newton in the interim as well.

There were three items brought forth by Councilmembers for consideration as agenda items at a future meeting. Councilmembers Benzian and Donovan would like to establish a City Ordinance to prohibit all gas leaf blowers within the city limits. They see this as a logical extension to the City’s recently adopted policy for city leaf blowers. This would require residents and landscapers to use electric or battery-operated leaf blowers. Other non-gas equipment will be considered in the future. It was pointed out that many cities have this policy to promote environmental stewardship. Councilmember Heinze asked if staff could look into how to incentivize compliance.

Councilmember Sandke asked that two safety items be considered. The first was for additional pedestrian safety and traffic calming measures at the intersection of Sixth Avenue and Pomona Avenue. The second was the installation of painted green surface of the Bayshore Bikeway at the intersection at the Coronado Yacht Club. The Mayor referred both of the items to the newly formed Mobility Commission.

Items of interest on the Consent Calendar also included:

~ The work on the Eighth Street and Coronado Avenue Storm Drain Emergency repairs project has been completed.

~ The Second and Orange Parklets project has been completed.

~ The City will advertise for bids for the City’s Naval Base Coronado Coastal (NCC) to Coronado Cays Pump Station.

~ Janice McElroy was reappointed to serve a second, three-year term on the Design Review Commission.