And the Emmy® Goes To Five Coronado Residents For the Win

In the category Sports – Daily or Weekly Program or Special, Coronado had two winners, both adding to their Emmy collections. Tom Catlin for his work for Fox Sports San Diego covering the Hoffman Statue Unveiling. Catlin shared this Emmy with a team of six others. Tom’s favorite part of the creative process is conducting interviews, he is truly interested in people’s stories. He also likes going through all the material, looking for the “gold nuggets” that make a good story a great story. 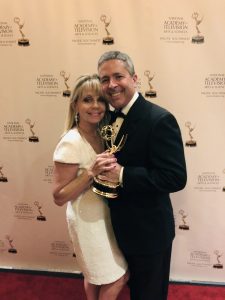 Upon winning, Catlin says he was thrilled. He thought about the talent the Padres brought to the production with Erik and Kevin, Wayne Partello, Brendan Nieto, Nial Nelson-Hopkins and Randy Wesley, all of whom contributed. And he thought about the great productions on the horizon that are possible when they collaborate. He also thought about his wife Dollie Catlin (owner of Dollie Style & Accessories on Orange Avenue), who is by his side for every minute of the production process. He believes she deserves an Emmy for putting up with his odd hours. Laughing, he says the next time he guesses what time he’ll be home correctly, it’ll be the first time.

You can see Tom’s work on Fox Sports San Diego (the Padres channel). He produces roughly four documentaries titled “Spotlight” each year, along with a weekly show named “Inside San Diego Sports.” Tom, who is a member of the Optimist Club of Coronado, did mention that he forgot to thank Wayne Partello and Erik Meyer from the Padres for choosing him to produce this… he says it’s the first and most important step of the process. 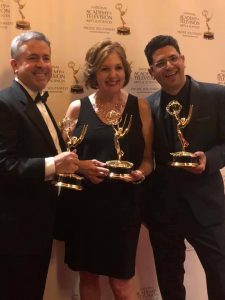 In the same category, Jane Mitchell picked up another Emmy to add to her many for One on One with Hall of Famer Trevor Hoffman 2018.

And two more island winners, in the category of Sports – Event/Game – Live/Unedited, islanders Jason Lewis and Don Orsillo along with their team at Fox Sports San Diego won for the coverage of Padres Opening Day. 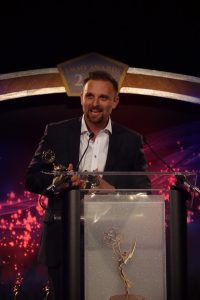 And in a completely different category, Jacques Spitzer, founder of Raindrop Branding and Advertising, won for Single Spot – Commercial for Old You Meet New You which they produced in collaboration with the San Diego Symphony. Jacques was also nominated for Commercial – Campaign, Commit To Your Car.

Spitzer knew the commercial for the symphony was something unique and different that had never been done for an arts organization before. But he had no idea that it would do almost a million views all over the world even though there was very little spend behind the ad. Almost all of the concerts mentioned sold out! True success in marketing!

Jacques enjoys the script-writing process and battling all the ideas and jokes to see what makes the cut, then seeing it come to life. He is proud that the team of Raindrop Marketing working on this piece came together creating something special for the win.

Congratulations to these Coronadans, acknowledged for being outstanding in their industry.