Every year, the Associated Student Body (ASB) at Coronado High School holds the “Powderpuff” event for the juniors and seniors of CHS. An event held at many schools across the country, CHS brings special spirit to this tradition. Essentially, it is a competition between the juniors and seniors in a series of contests, including a cheer dance routine and a flag football game, with a twist.

While the cheerleaders would normally perform the dance routines at pep rallies, a group of boys from each class choreograph and perform a routine. In the weeks prior, the junior and senior boys prepare and practice the routine for the Powderpuff Pep Rally. When Powderpuff day comes, the boys and girls participating in each class meet early to “primp” in blue makeup (seniors) and pink makeup (juniors).

The CHS campus was filled with blue and pink on Friday, May 31. At break, both the juniors and seniors were warming up and giving a preview of their routines by performing stunts on the quad. 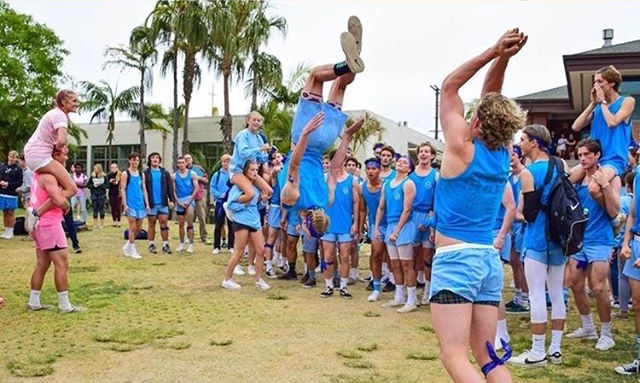 Once both teams were warmed up to perform their routine, they each displayed their cheerleading skills to the school.

Next up, the girls were ready to parallel the boys by showcasing their athletic ability at the Powderpuff flag football game that evening. The student body, the faculty, and the Coronado community gathered to watch this annual novelty. After four quarters of a running clock with no score for either side, the seniors took the Powderpuff victory when track star Alysah Hickey scored a touchdown in the second overtime. The senior boys, deemed winners during the pep rally, again performed their routine during halftime of the game.

Congratulations to the graduating seniors on completing their four years of high school, and good luck to them on their future endeavors!

Due to the Coronavirus, all organized Coronado sports have been put on hold. However, there are highlights happening in backyards all over Coronado.  By...
Read more
Sports

On Wednesday, March 4th, the Coronado boys varsity volleyball team beat Saint Augustine 3-2. Then the next day they bested Montgomery with a 3-0...
Read more
Sports

NOTE:  THIS EVENT HAS BEEN CANCELLEDNote:  In just a few hours from Coronado, you can be watching the top tennis players in the world.Tennis...
Read more

Thanks to the Coronado Police Department for providing The Coronado Times with the below information (partial list): Crimes: 1/8/20: Disturbing the Peace (Loud Noise) near 1500...
Read more
Crime

Thanks to the Coronado Police Department for providing The Coronado Times with the below information (partial list):  Crimes: 12/27/19-12/30/19: Burglary near 1800 block of Silver Strand...
Read more
Crime

Thanks to the Coronado Police Department for providing The Coronado Times with the below information (partial list): Crimes: 12/26/19: Malicious Mischief/Vandalism (Misdemeanor) near 1000 block of...
Read more
Crime

Crimes: 11/29/19-11/30/19: Vandalism near 700 block of Seventh StreetUnknown suspect vandalized the driver's side view mirror and threw an unknown adhesive substance on a parked...
Read more
Crime

Thanks to the Coronado Police Department for providing The Coronado Times with the below information (partial list): Crimes: 11/25/19: Petty Theft near 400 block of I...
Read more
Crime

Thanks to the Coronado Police Department for providing The Coronado Times with the below information (partial list): Crimes: 11/9/19-11/10/19: Burglary of the Second Degree near 500...
Read more
Advertisement
Advertise Here (Get Rates)