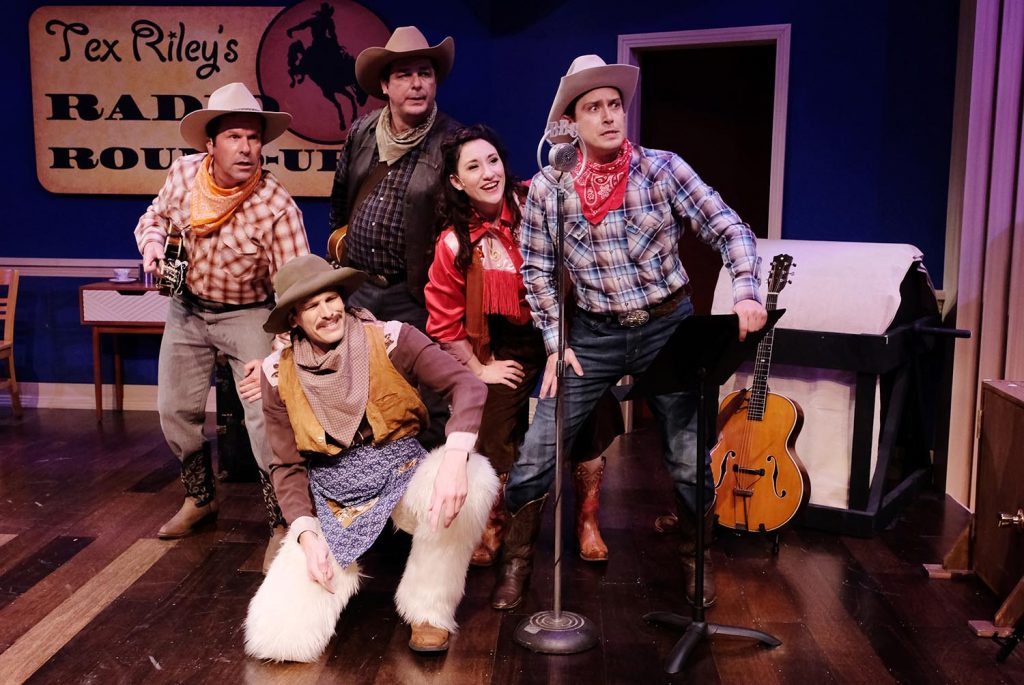 Saddle up as the Lamb’s Players Theatre turns Brits into Cowboys in their latest production of the wacky western CHAPS! The story is set in 1944, during WW II, at the BBC studios in London where Tex Riley’s Singing Cowboys are scheduled to perform. Mabel Halliday, played by Caitie Grady, is the Tour Manager and saves the day when she convinces the BBC studio crew to perform when Tex and his cowboys are a no show. She is a spunky force during the show and holds her own as the only woman actor of this six-person production.  Her voice is melodic, and the actors harmonize beautifully throughout this witty show that will surely make you laugh and clap throughout.

My friend Vicky and I are not old western song aficionados, but the man next to me was humming along to every tune. Classic favorites include “Tumblin Tumbleweeds,” “Cool Water,” “Texas in the Spring,” and “Cattle Call.” We both felt this show is a must-see for a comedic escape filled with lighthearted laughs. 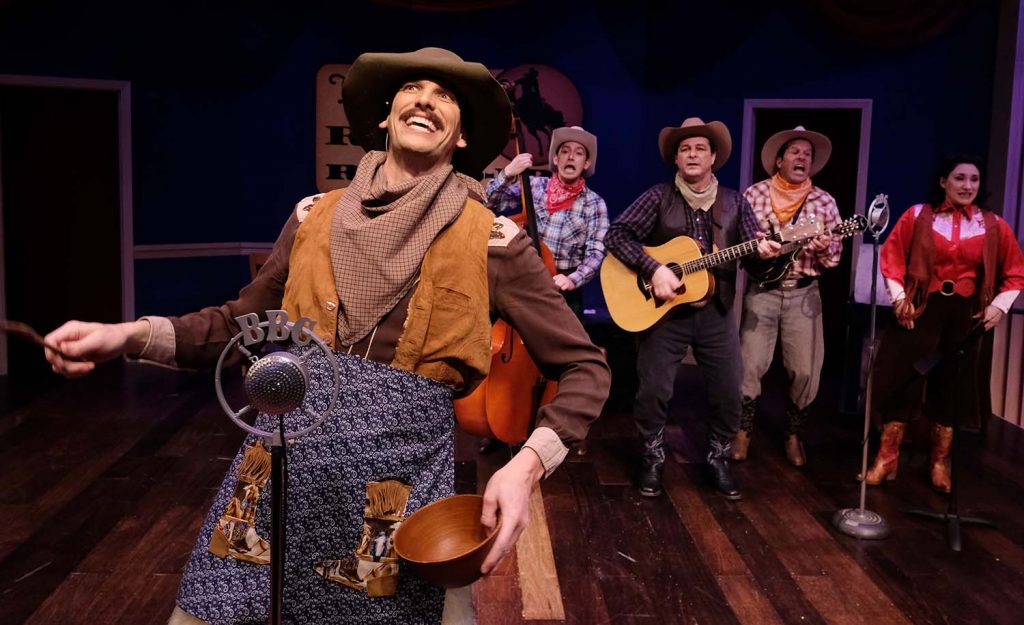 The set is simple, yet effective for doubling as the BBC studios and the Wild West, which is highlighted by the outrageous cowboy costumes and western music. Don’t be fooled by Archie, played by Ross Hellwig, in his dapper suit as the prim, tea drinking announcer at the beginning. Wait until you see him transform to a white hairy chap-wearing cowboy to the alluring Belle salon girl singing “Habanera” from Carmen.  A couple near me was from London and most impressed with the authenticity of his British accent.

Although he never takes center stage, Arusi Santi, as Stan, steals the show as the wide-eyed sound effects guy through the tale with horns, whoopie cushions, rain makers and everything in between adding to the hilarity of the show. We, along with all the people sitting in our row, voted him as our favorite character.

You are guaranteed to laugh out loud when Charles Evans Jr, as Miles Shadwell, plays a real-life puppet with comedic singing and dancing performances. Steve Gouveia, who plays Archie, and Manny Fernandez, as Clive Cooper, also provide zany antics throughout and play the guitar and bass interchangeably.

In Act II, this spirited production finds everyone dead on the range before it’s time to saddle up for one last song. All these actors have undeniable talent and impressive resumes as they return to the Lamb’s Players Theatre for this lighthearted, yet spirited English cowboy show.

Chaps! was written by Jahnna Beecham and Malcom Hillgartner and directed by Robert Smyth. Music direction is by Jon Lorenz and choreography is directed by Deborah Gillmour Smyth. This witty and highly entertaining play has been extended through April 20. The show is one hour and 45 minutes with an intermission and is recommended for ages five and up. Tickets can be purchased online at www.lambsplayers.org, by phone at 619-437-6000 or at the box office, 442 Orange Avenue. Ask about senior, military and under 35 club discounts. There’s not a bad seat in the house. 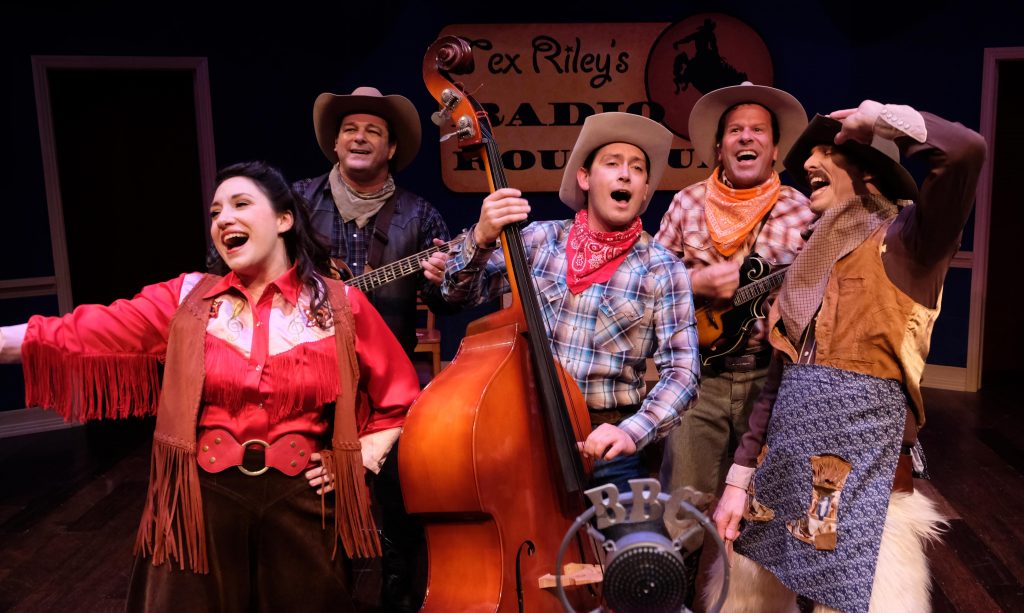 As the City of Coronado continues to create new TV and online programming for the community, the City presents another special production of Ms....
Read more
Stage

Coronado Playhouse has announced more changes to its current 2020 season due to the COVID-19 epidemic. Because of the county-wide shutdown and in accordance...
Read more
Stage

Dance in the Time of COVID-19

The Rosin Box Project (TRBP), a local San Diego contemporary ballet company, is not going to allow COVID-19 to stop the music (or, in...
Read more
Entertainment

While sheltering in place at home, the cast of Lamb's Players Theatre production of the musical ALICE put together this coronavirus adaptation of “The...
Read more
Stage

Lamb's Players Theatre presents Alice. The music and adaptation by Elizabeth Swados from the Lewis Carroll adventures Alice in Wonderland and Through the Looking...
Read more