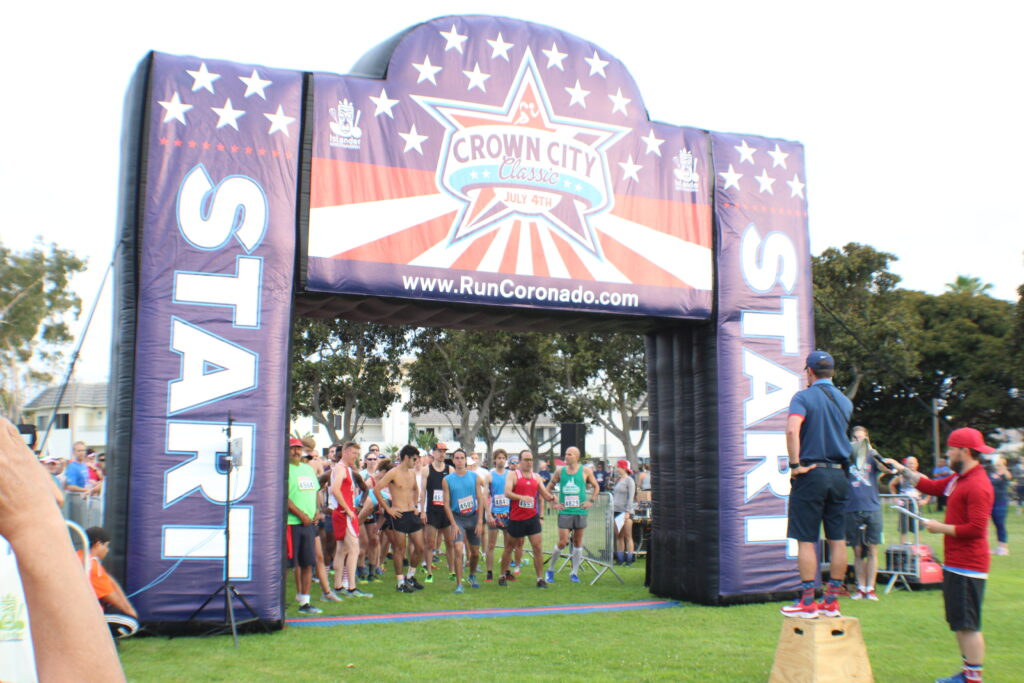 After much preparation and coordination, runners and spectators participated in the 44th Annual Crown City Classic on this year’s Fourth of July. The race, founded by Dan Orr, John O’Brien, and Kathy Loper in 1975, has preserved its unwavering patriotic spirit for several decades. This year, the 12K and 5K run/walk collectively attracted nearly two thousand runners nationwide to the historic city of Coronado. Checking in at 6:30 AM at Tidelands Park, participants were ready at the starting line by 7:00 AM to start the 12K race in three heats according to speed. Following soon after the 12K heats began, the 5K heats started and all runners were making their way down Glorietta Boulevard. 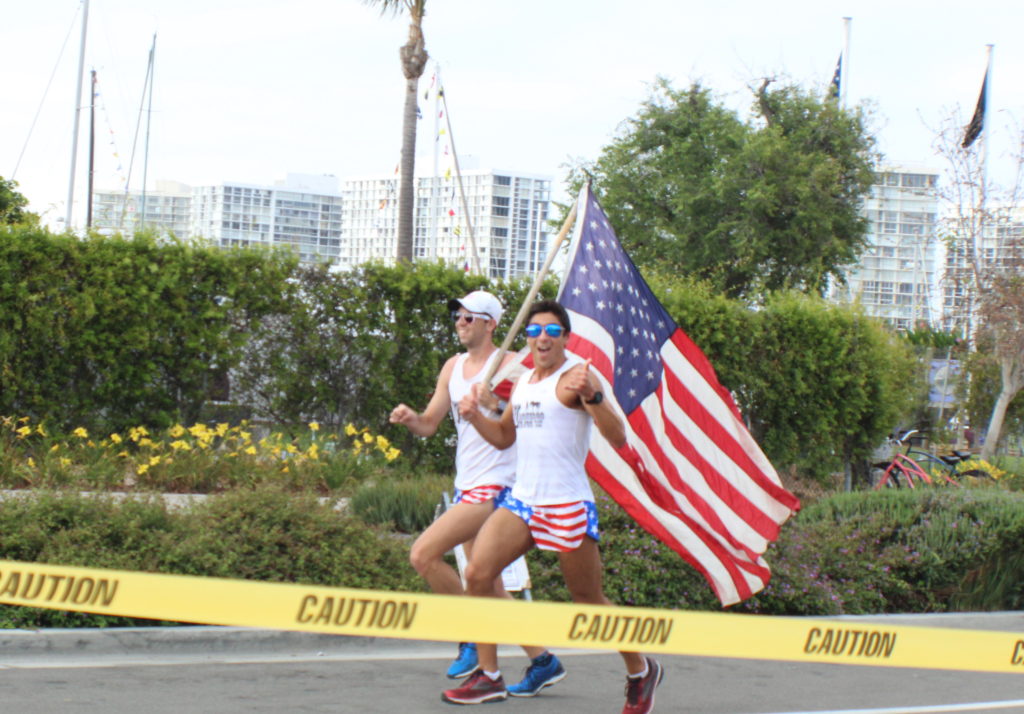 As there were three different heats, there were runners racing at various paces. Many also ran to display their patriotism, speed, or just enjoy their holiday on-island. In the faster heats, many of the younger runners would be seen competing in cross country and track races in high school or college.

The turnaround point for the 5K occurred next to the Coronado Municipal Golf Course near the corner of Vista Place and Glorietta Boulevard, which the fast-pace runners reached in less than nine minutes. Participants in the 12K (7.4 miles) did not make their turnaround until past the Naval Amphibious Base on the Strand. Both races finished back at Tidelands Park, where all finishers received a medal. 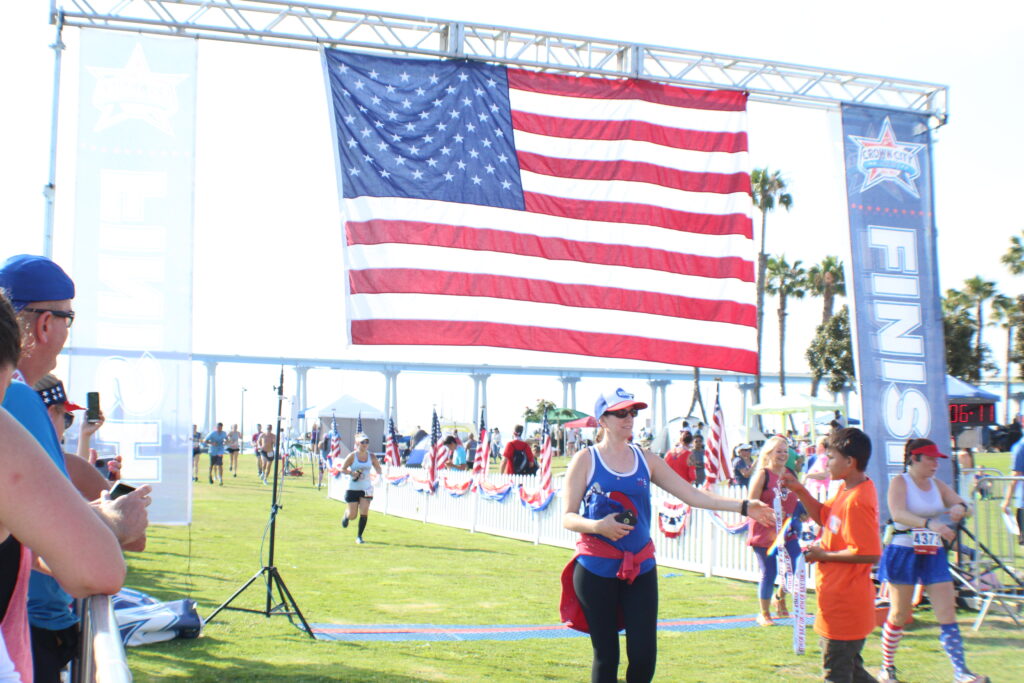 After every runner crossed the finish line, the awards ceremony took place at 8:30 AM, where the top three male and female finishers in each race were awarded a medal. 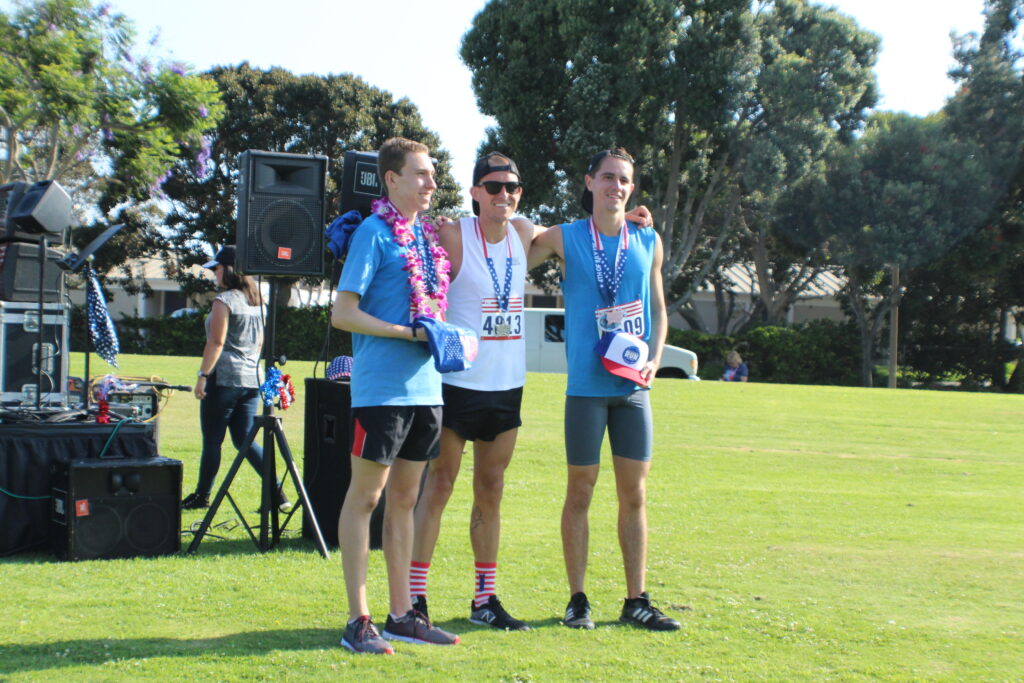 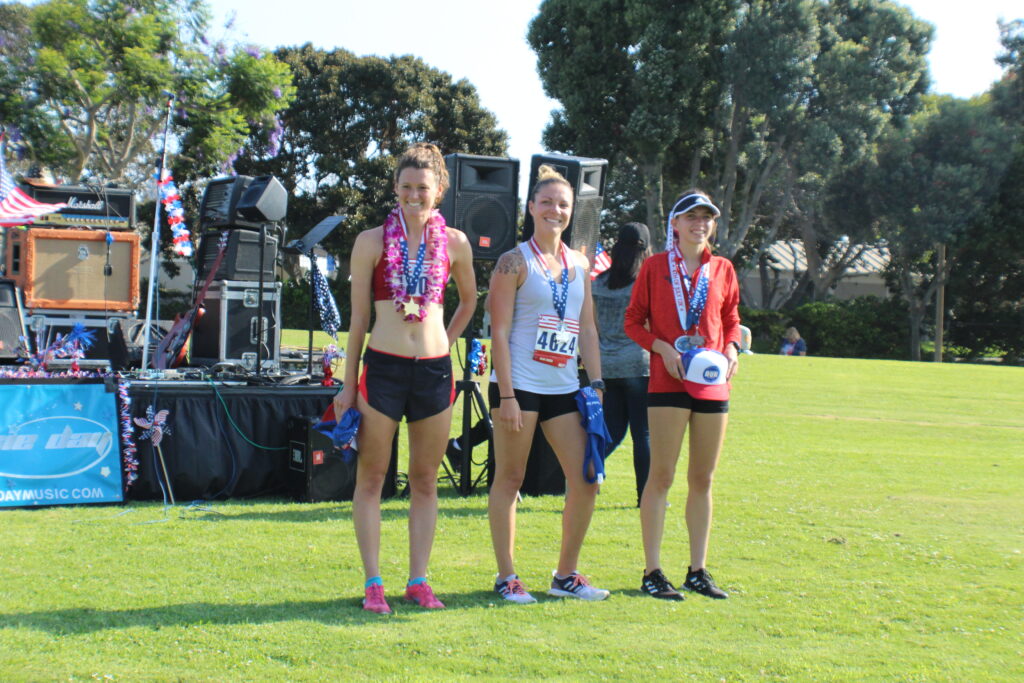 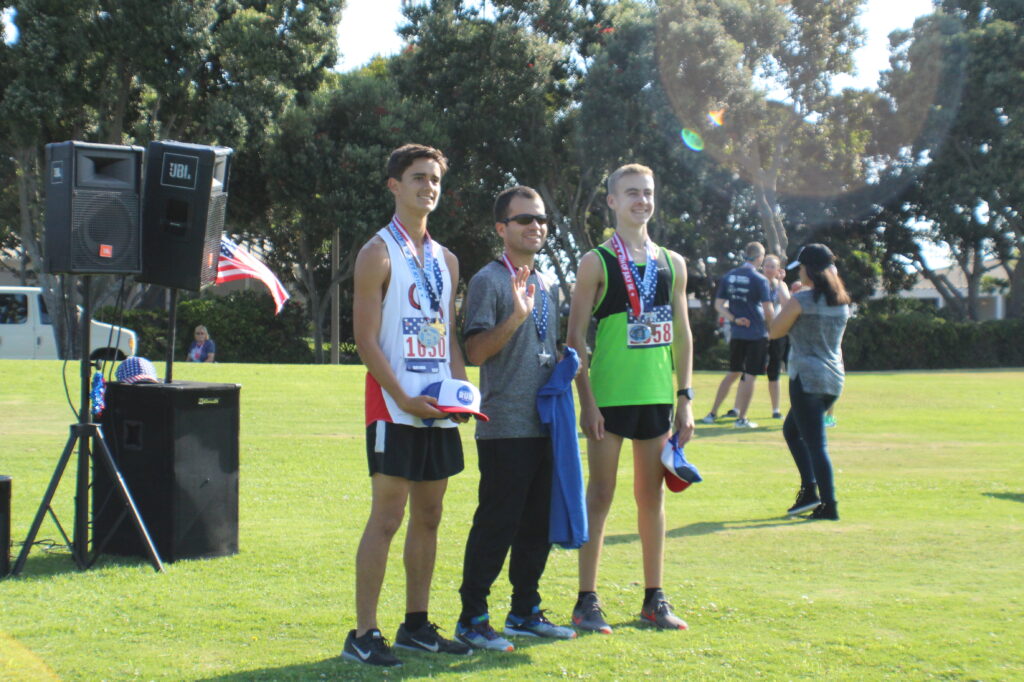 Congratulation to all finishers in the 12K and 5K races!

New in 2018, the Crown City Mile attracted over a hundred runners nationwide. After the 12K and 5K races, many runners joined the crowds on Orange Avenue to compete in this race. As this race took place right before the Fourth of July parade, parade-goers setting up early were able to cheer on the runners, connecting the Crown City Classic with the festivities on Orange Avenue. This event was split into three divisions: a men’s race, women’s race, and youth race. 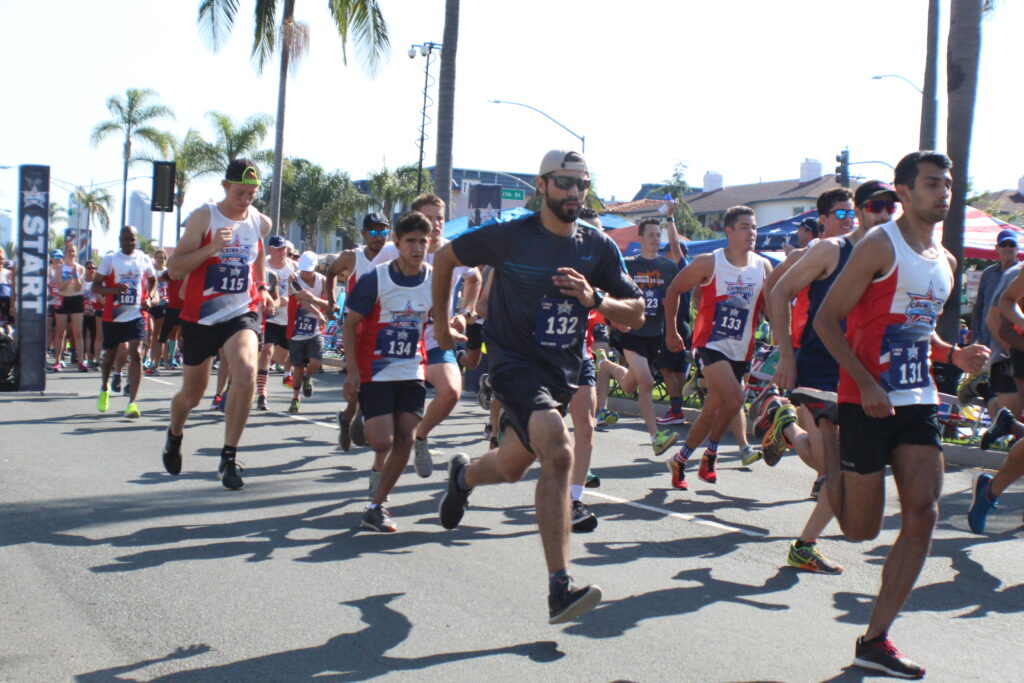 At 9:15 AM, the gun shot signaled the start of the men’s race starting at Fourth and Orange. Running down six blocks and passing all the parade-goers, their one-mile race finished at Star Park where they joined the rest of the Fourth of July festivities. Out of thirty-six runners, the top three finishers receiving medals in the men’s race were Matthew Palmer from Portland, OR, who clocked a 4:19 mile; Shyan Vaziri from San Diego, CA, who clocked 4:15; and Abraham Tesfamariam from Albuquerque, NM, clocking 4:14. 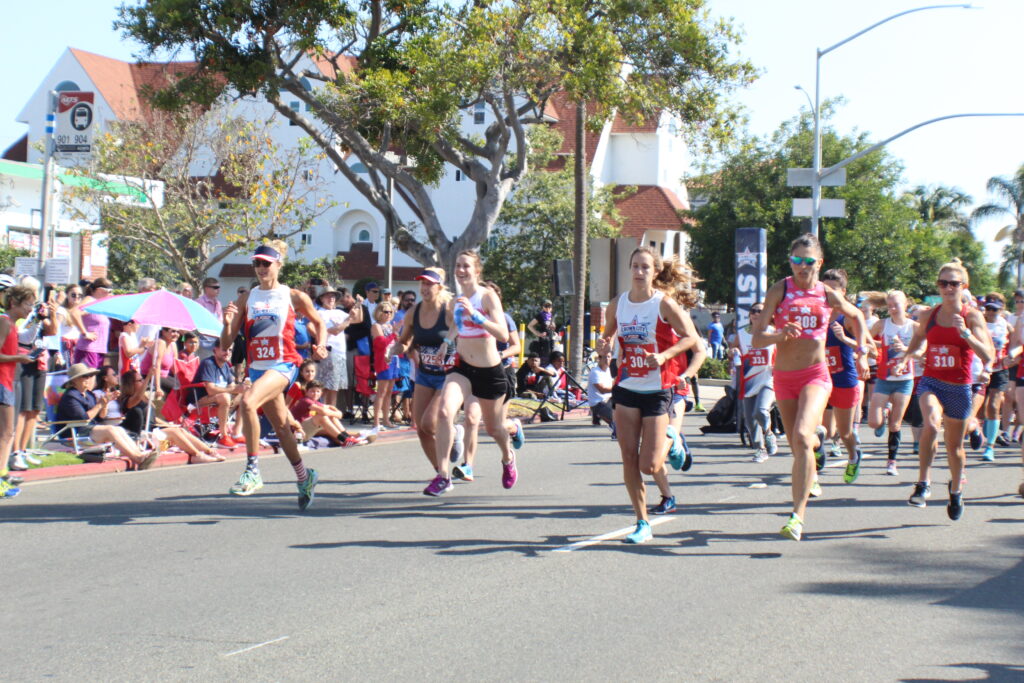 Three minutes after the men sprinted from the start line, the women’s race took off at the next gun shot, demonstrating their speed and patriotism along Orange. With twenty-four racing, women of all ages were able to race—four of which finished in under six minutes. The top three female runners in this race were Rianna Goins, with a 5:30 mile; Bridie McCarey, with a 5:16 mile; and Natasha LaBeaud Anzures, finishing in 5:03. 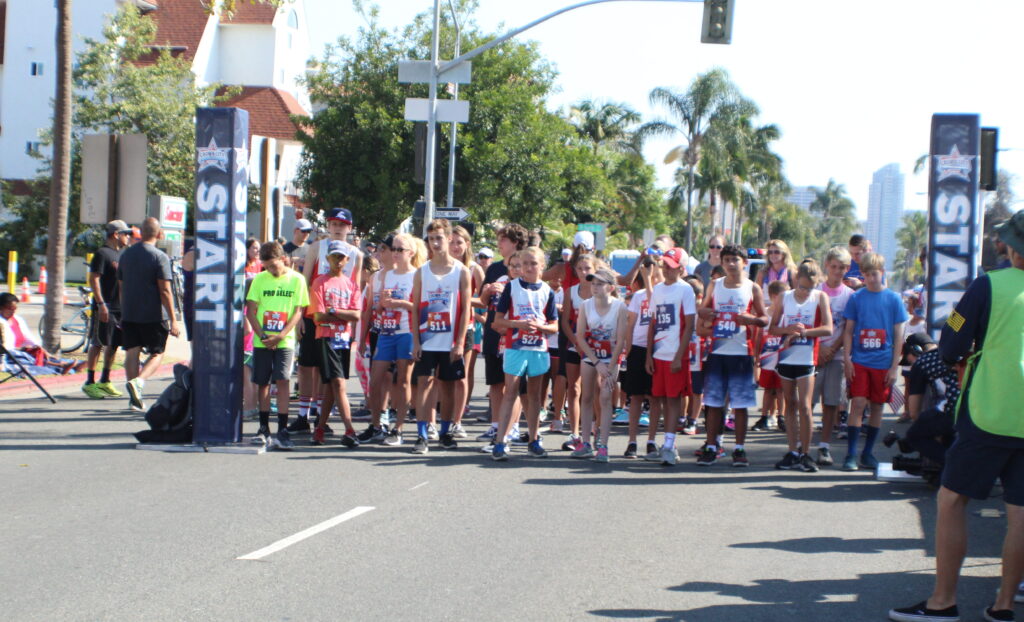 Finishing off the Crown City Mile, the co-ed youth heats started shortly after the women’s race took off. Ranging from participants at age four to age seventeen, there were fifty-nine entries in this youth race. As each runner made their way down to the finish line, they joined their families in the Fourth of July parade to conclude this year’s Crown City Classic.

The Coronado Middle School & K-5 Surf Club is a saving grace, especially these days — as well as reaches far and wide, including...
Read more
People

Carter Grimes: From the Nado Sun to the Avon Farms Ice

When you think of Southern California sports, what comes to mind? Is it surfing? Water polo? Swimming? Or perhaps baseball or soccer? Whatever sport...
Read more
Business

Coronado Psych: How to Get Started With Therapy

Not only is it hard to recognize when you need therapy or counseling services, it can be even harder to find a therapist who...
Read more
Sports

Submitted by John DuncanThank you to the wonderful Coronado community and the amazing cross section of residents - including families, small business owners, retired...
Read more

Support for Nick Kato for Coronado School Board

Submitted by Shane DurkinFriends and Neighbors,This letter is to affirm my support for Nick Kato to be elected to the Coronado School Board. I...
Read more

Support for Whitney Antrim for Coronado School Board

Submitted by Whitney BenzianI am supporting Whitney Antrim for the Coronado School Board. I have known Whitney since our snazzy red sweater days at...
Read more

In Support of Whitney Antrim for CUSD Board

Submitted by Charlie KhouryWhat should the community of Coronado want in their school board?A board member who puts children first. Anyone who has...
Read more

This year has been one of more downs than ups for businesses and restaurants in Coronado (and worldwide) and that has created quite a...
Read more
People

When news of the pandemic hit, I was six weeks pregnant. Never did I imagine that I would deliver my baby while the world...
Read more
Education

What started as a series of bedtime stories quickly grew into a family collaboration and COVID-quarantine project, resulting in the world’s first illustrated children’s...
Read more
Business

Grocery stores and markets are among the essential businesses called on to remain open from the start and throughout the continued duration of the...
Read more