A notice began circulating announcing a second school walkout to change gun laws in an effort to keep schools safe. Again there were students who felt that a walkout would be a way of peacefully protesting and having their concerns heard. CHS junior Savannah Rose 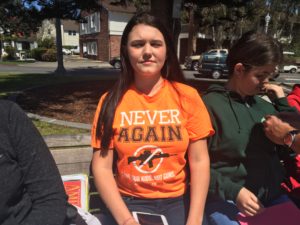 organized the walkout using the flyer created by the “March For Our Lives San Diego” movement. Savannah added her words to the flyer, which included her first getting feedback from students about how empowered they felt participating in the last march. Savannah shared that the teens of Parkland, Florida, the founders of March For Our Lives, scheduled April 20th as #nationalschoolwalkoutday where students would walk out and not return until laws changed. She told me she wasn’t sure how many students would be participating but was hoping for a big turnout like the last time, just last month.

Savannah spoke with her history teacher, who is currently teaching civil rights, and shared her thoughts about a walkout that would last until the laws were changed. She said he agreed that it could work and lead Congress to change the law. As it turned out, only six students ended up walking out with her, three stayed with her. 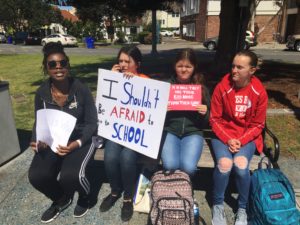 She and the other three girls who walked down to the fountain on Orange Ave, where I caught up with them, felt the low turnout had to to do with what they saw an intimidation by the school administration. Law enforcement and fire department personnel, along with principal Jenny Moore, were at the open school gates, but many students seemed to have been deterred by their presence. They were not present at the gates at the last walkout.

Furthermore, the school superintendent, Karl Mueller, had sent an email out to the CUSD staff and parents two days before the scheduled walkout reading in part, “All students in CUSD, regardless of their own personal views, are entitled to uninterrupted access to education, free from distraction, in a safe and supportive environment. Students leaving their classrooms and our campus hinders our ability to provide these services to all of our children.

“Coronado Unified will uphold district attendance policies on Friday. Students choosing to leave school grounds during instructional time will be marked truant and appropriate discipline will be dispensed. Truancy may carry classroom/academic consequences in addition to administrative actions including, but not limited to, end-of-year student activities.” 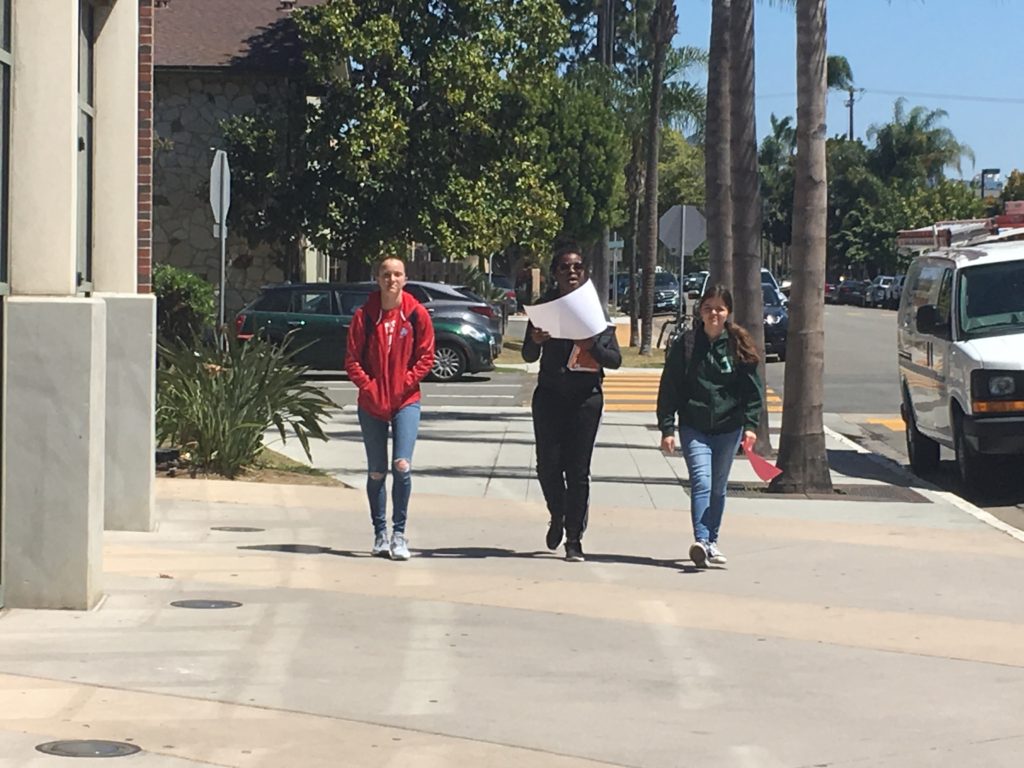 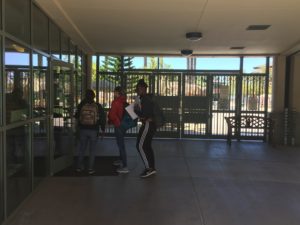 after about 30 minutes, but not before their parents were called and notified that they were missing from campus. All four of the students told me their parents were aware of their actions. Junior Sasha Hofisi said her parents absolutely supported her efforts. She said she understood the faculty, officers, and first responders, although intimidating, were there to make sure everyone was kept safe; however it didn’t deter her like she felt it did many other students. In addition, there was an ASB assembly which was scheduled at the same time as the walkout. She said she heard from teachers that the assembly was planned purposefully at the same time as the walkout.

I reached out to principal Jenny Moore who stated that the assembly had been scheduled back in September, and while she would agree that the presence of the officers at the gate may have looked intimidating and like a deterrent, that was not the intent. She shared that three adults present were, in fact, discussing the earnest desire of the students to be understood. Her response to my question regarding the email being sent out (which did not happen prior to the previous walkout), was that it was a reminder and that any student who leaves campus without permission is subject to the same stipulations set forth in the letter.

Karen Coffield, mother of Savannah Rose, supports her daughter’s passion for schools being safe places to learn without guns or bullying. Savannah and the other three were willing to accept the consequences and did not ask their parents to “cover” for them by writing a note to excuse their absence.

As with the March 14 walkout, many community members on the Coronado Happenings Facebook group voiced their opinions on the students’ decision. Sadly, many adults took to bullying and degrading the students, going so low as to call them names. Whether one agrees or disagrees with what someone else’s child is doing, belittling and name-calling does not seem like an effective way to engage in productive conversation. If these young-adult students are willing to accept the consequences, it seems their actions are between them, the school and their families.

Coronado adults, teenagers, and kids are encouraged to participate in the 2021 Coronado Community Read with events throughout the month of February. This year's...
Read more
People