Our esteemed Canine Mayor, The Honorable Bailey Hall, has done a wonderful job representing the animals and animal lovers of Coronado for the past two years.  But it’s time for him to hand his gavel to someone new.

Is your dog cut out for politics? Is your friendly Fido well skilled at shaking hands, pressing the flesh and kissing babies? If your answer is “Yes!”, why not consider a run for office?  Every two years Coronado elects its Canine Mayor, and 2018 is that year. The election is open to all dogs who either live in Coronado (including on the Naval bases) or who have been adopted from PAWS of Coronado. These public spirited canines and their families vie for the honor of representing pets of all kinds in PAWS activities throughout the year. The 4th of July Parade, December Holiday Parade, Police and Fire Open House, Flower Show and many other activities will provide a platform to our Canine Mayor and its family to spread the word about animal welfare issues. 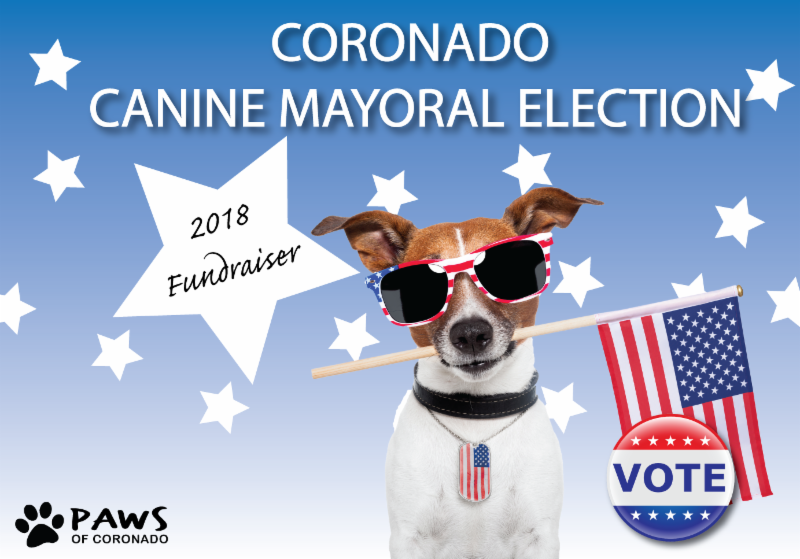 Applications for the election may be found online or at the Coronado Animal Care Facility, located at 1395 First Street, Coronado. The deadline for filing election papers is February 28. Campaigning begins in earnest on March 1, with each “caninedidate” revving up their supporters and bringing their issues to the community. Voting begins on April 1, either on the PAWS website or at the CACF. Each vote costs $1.00. Anyone may vote as many times as they wish and for as many candidates as they wish. Ongoing vote tallies will be kept on the PAWS website and about town to see how the various candidates are faring. Polls close on April 30, with the winner being announced and the inauguration being celebrated at the beginning of May.

All proceeds from the Canine Mayoral Race will go to the PAWS Special Medical Needs Fund, begun by its founder, Louise Shirey. Over $75,000.00 was spent by PAWS in 2017 alone for the extraordinary medical needs of the stray, abandoned and relinquished animals, both dogs and cats, that came into the care of the Coronado Animal Care Facility. Without this support of PAWS, most of these special needs animals would have faced humane euthanasia. Instead, they are ALL in loving, forever homes.

Needless to say, the Canine Mayor Election is more fun than a barrel of puppies. Campaign slogans will abound, election posters will be put up all over town and caninedidates will strut their stuff at meet and greets, mixers and Yappy Hours. Let the games begin!

PAWS of Coronadohttp://www.pawsofcoronado.org
PAWS of Coronado was established in 2003. PAWS manages the Coronado Animal Care Facility and cares for the orphaned cats and dogs of Coronado while they find them their forever homes.

Pets of the Week: The “Lion King” Kittens

Pet of the Week: Claire, a Terrier Mix for Adoption