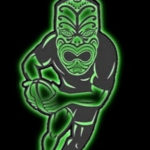 Now that the Boys’ Varsity team has finished its season, the Lady Ruggers are preparing for playoffs. Last Saturday, Coronado faced Valley Center High School, after having lost one of their best players, Stefany James, to an injury.

Valley Center kicked off to start the match, with the ball falling into the hands of Coronado’s fastest player Rose Ty. Immediately after receiving the ball, Ty did not hesitate to make the try, which gave Coronado an early lead at 7-0. After kicking off to their opponents, Valley Center quickly regained their ground and evaded Coronado’s tackles. Valley Center was then able to score a try and tie the game at 7-7. This back and forth continued, ending the first half at 12-12.

The second half of the match was reliant on good defense from Araceli Flores, Nessa Hudson, and Charlotte Walton. As Valley Center continued to apply pressure, Christie Parr found an opportunity to score a try more than seventy yards from the try line. Walton passed the ball to Parr, who ran through four players to successfully make the try. Nessa Hudson was then able to make the conversion giving Coronado a 19-12 lead. The clock began to run out, which prompted Valley Center to attempt a final try and conversion. The former they would do, but their conversion went wide. The final score was 19-17—another win for Coronado’s Lady Ruggers.