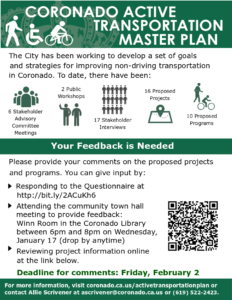 It seems people only show up when their vested interests are at stake — attendance at last Wednesday’s Active Transportation community meeting is a prime example.

Only 28 people attended the Active Transportation town hall style meeting on January 17. “The turnout was slightly higher than the first public workshop,” said Allie Scrivener, Active Transportation Planner for the City of Coronado. Were it not for the people from Isabella Ave, who were there to protest a proposed median at the coroner of Isabella and Ocean, attendance would have been more anemic.

This is not the first time bicycle infrastructure projects have rallied residents. Proposed bike lanes on on H Avenue and Coronado Avenue were brought down by residents objecting to them. Plans to study the feasibility of putting a multi-use path along Ocean Blvd, the “bike path on the beach,” rallied the whole town. As did a plan to add sharrows to neighborhood streets.

The proposed median would cost up to $500,000. Planners believe that it would increase walking safety for pedestrians and cyclists crossing the intersection by slowing traffic and increasing visibility.

They also identified drawbacks. The landscape would have to be maintained and watered, which would add to the costs. Residents at the west end of the street would have trouble turning in both directions. Buses and trolleys could no longer make U-turns at the end of the block. The median could also attract loiters.

People living on the street echoed these concerns and added a few of their own: it will give beach goers another place to unload and create traffic jams, people will not only loiter on the median they will leave trash there; several people said a cross walk would be cheaper and just as effective.

“This is wrong in so many ways,” said Susan Heavilin, whose “Baby Del” mansion sits across from the proposed median.

While Isabella residents and their concerns dominated the public commentary section, most of the meeting was taken up by Brian Gaze, Senior Project Manager at Chen Ryan Associates. The city hired his firm to help develop Coronado’s active transportation plan. Gaze displayed a slide presentation on the draft master plan’s proposed components.

The draft infrastructure projects offer a wide range of initiatives to make it safer to walk, skate or cycle here. These include: a bike lane on Alameda from First Street to Tenth Street and then on Tenth Street to Pomona, red curb markings at intersections on Third and Fourth streets, pedestrian scale lighting placed along residential streets, curb extensions on Fourth at A and C, and Pomona. 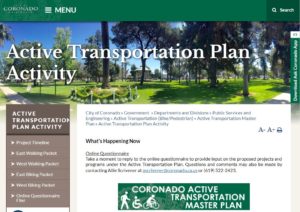 There are also a number of educational proposals to teach cyclists, both children and adults, how to ride more safely. For a complete list and details of the proposed projects go to the Active Transportation Plan Activity Page.

There you will also find an online questionnaire where you can vote and express your views on each proposal (complete before Feb. 2). A final public meeting will be held in late February to give residents another opportunity to voice their views before the draft Active Transportation Master Plan goes to the city council.

Click through images below to see the survey questions in the city’s current online questionnaire: