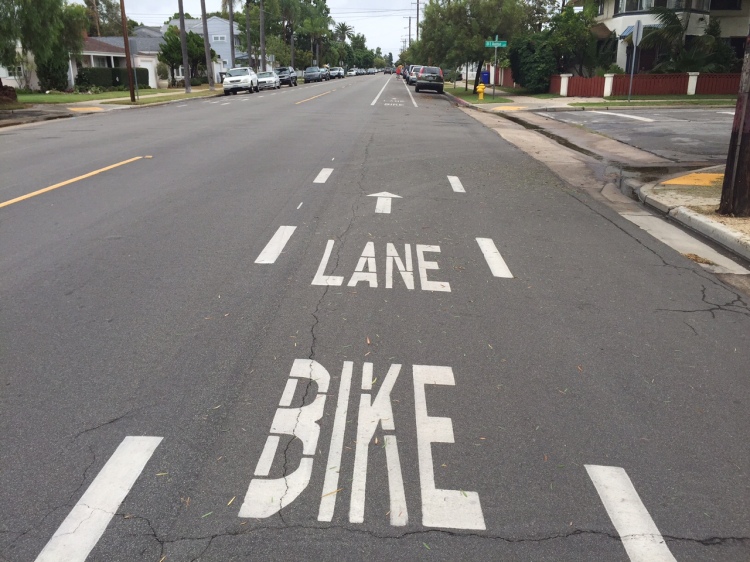 Photo: Sixth Street bike lane that was added in early 2014.

The city council voted last night to suspend striping streets for bicycle lanes and to set a fee schedule for bicycle fines. Both passed unanimously on a 4-0 vote. Councilman Mike Woiwode was absent.

Before the vote to suspend bicycle striping, Mayor Casey Tanaka tossed a “curve ball” (in the words of Councilman Bill Sandke) into the controversy by proposing that an advisory measure be placed on ballot in in June primary or November election.

He argued that the councils piecemeal approach to bicycle lanes had caused confusion by approving striping on some streets not on others. Public opinion being the single criterion.

A number of residents from Coronado Blvd. and H Avenue told the council that they didnt want bicyclist riding down their streets. The council complied by suspending the striping.

Tanaka clearly has grown weary of this approach. People who perceive that their ox is being gored, may not be reflective of what the majority of people think, he said.

To gage what the public sentiment beyond the handful of people who show up at city council meetings, send e-mails, or participate in online surveys, Tanaka suggested the measure simple ask voters if they would support bike lanes on Alameda Blvd. and 10th Avenue to complete a bike loop around the city.

This would give a backbone to what we plan to do, he said. Once those streets join Glorietta, the city could see whether other streets warranted bicycle lanes, he added. 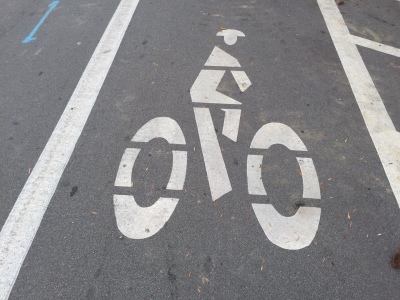 The rest of the council was not ready to join him, but did find the suggestion intriguing. Councilman Richard Bailey suggested it be discussed when the council took up scheduled review of the Bicycle Master Plan (BMP) that was approved five years ago and whose implementation has proved contentious.

The council approved the review at the same time it agreed to Bailey’s request to revisit the plans to stripe for bicycles when street’s were slurry slipped.

Striping was approved in February 2015 for seven streets. Notices went out in March and April and by late Summer, there was a public outcry from residents on Olive Avenue. The first street scheduled to be striped. Six others are scheduled for later this year.

At last nights meeting it was clear that controversy had taken hold across the city. The council chamber was packed.

Unlike the feasibility study to consider a multi-use path for Ocean Blvd that was voted down at the September 1 meeting, with only two people stepping forward to support the plan, striping appeared to have as many proponents as it had opponents.

Proponents argued that bicycle lanes kept cyclists and drivers safe, by slowing traffic and keeping each on their own section of road. A point hammered by Cliff Maurer, Director of Engineering and Public Service, who advocated continuing the project.

You know where youre supposed to be and how to act, he argued, adding that bike lanes on Glorietta Blvd had reduced wrong way cycling, perhaps the biggest cause of accidents and had slowed traffic.

Many scoffed at this contending that it was speed bumps, not bicycle lanes that slowed traffic on Glorietta Blvd. Maurer didnt offer any evidence that bicycle lanes had had any impact on traffic speeds.

Others called safety claims into question and asked the city to provide more data, on traffic volume and accident incidences. Where are the studies? Robbins Kelly asked. She also questioned the processes, pointing striping all the streets was not in the BMP. A point Bailey has also raised.

Olive Avenue resident Lynn Scott wonder if the lanes on her street were even necessary: Your putting graffiti outside our windows with very little traffic and few bicycles passing through on a road so wide that bicycles and cars can see each other from blocks away.

Not everyone agreed. We have chaos on our wide streets. Striping addresses those issues, said David Fairbanks. This is a big step in curing the problem. You did the right thing. Dont be bullied into changing your mind.

The debate over striping took two hours. After it was over only a handful of people stayed to discuss creating a new fine schedule for bicycle infractions. The schedule is based on a model, now in place in Davis, California, where the first offense in $50, the second is $100 and the third $250.

There was general agreement that there was growing agitation between bicyclist and motorist in the community as Eddie Warner put it, with much of the friction coming from bicyclists failure to obey traffic rules.

It will give police more tools, said Pat Callahan member of the BAC, who endorsed the new fine schedule.

Some felt the council should take a less punitive approach. Several people suggested that violates be issued a warning for a first offense. Councilman Bill Sandke suggested asking senior police volunteers to act as ambassadors and give out reminders, he said.

Harold Myers pointed out that Davis is a college town. Were dealing with kids here, he said.

Because many of the offenders are children, Carrie Downey suggested exploring an educational approach by offering online course for offenders to complete instead of a fine.

In the end Downey joined the rest of the council in supporting the measure. In doing so she argued that more was needed to make bicycling safe: We need enforcement. We need education. We need markings. We need fines.

To watch a replay of the City Council meeting, click here.

Get Coronado news, events and deals in your inbox each week. Sign up here.