Mark your calendar for February 7. In conjunction with the Coronado Yacht Club junior sailing program, the CHS team, which recently competed in the Rose Bowl Regatta with many other teams from California and around the West, will hold a BBQ chicken dinner at Coronado Yacht Club. Reserve your dinner, which includes BBQ chicken, beans, salad and dessert, all made on-site, at this link.

Nado Sailing is also kicking off an online fundraising campaign to begin to raise money for new sailboats to replace leaky and very old (some about 20 years old) boats. They have had some generous contributions from a few individuals and some of our local civic groups, but need much more to keep their smart, motivated sailors on the water.

The GoFundMe site can be found at www.GoFundMe.com/sailCHS. 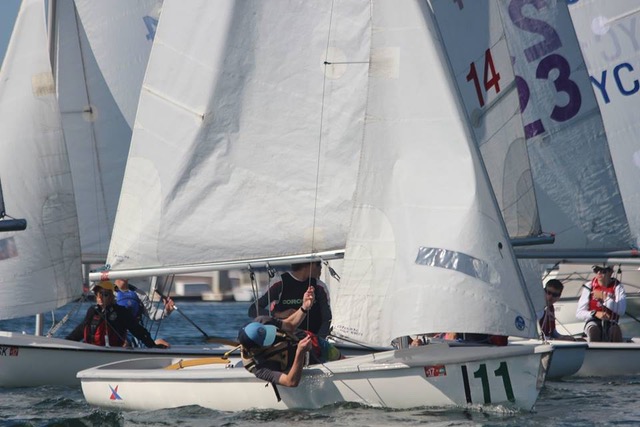 The team’s fleet of old FJ class sailboats are in desperate need of replacement. The sailing team receives no funding from the high school. Parents cover the costs of coaching and regatta travel; but maintaining broken, leaking and sometimes sinking boats continues to be a challenge. During many practices, some sailors are left high and dry on land due to the poor condition of boats.

Board president Trish Eaton and mother of two CHS sailors says, “We need more than $92,000 to replace the fleet. Two new boats have already been ordered at a cost of $15,330, but we have ten more to go. Your donation, no matter how large or how small, will have a direct positive impact on the quality of #nadosailing for many years to come.” 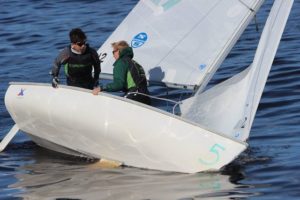 High school sailors are learning and using communication and leadership skills, while applying complex math, physics and geometry concepts to their sport. Sailors also become knowledgeable about weather, tides and the marine environment. These core skills form the basis of future careers in science, engineering, or management.

Former Olympian and Coronado resident Robbie Haines is supporting the #SailCHS effort and appears in a new short video about the team that can be seen here:

#nadosailing has a great track record. CHS graduate Paris Henken sailed for the United States at the 2016 Summer Olympics in Rio, and Coronado sailor Cooper Dressler is currently a grinder on the 2017 America’s Cup US syndicate Oracle Team USA. CHS sailors have been accepted to Harvard, Brown, Stanford, Boston College, The US Naval Academy, USC, George Washington, Georgetown and many other colleges and universities to sail and study.

To donate to #nadosailing and keep these amazing athletes, students and leaders of tomorrow on the water now and for years to come, go to www.GoFundMe.com/sailCHS. Follow the fundraising effort and the team via Twitter @CHS_Sailing and on Facebook.

With the help of the sailors and coaches, the team made some terrific short videos about the team, the benefits of sailing and more. These feature local Olympians Paris Henken, Robbie Haines and our own high school team sailors.

The team appreciates the community’s support to maintain sailing as an option for our future sailors.

The Graham Memorial Presbyterian Church Thrift Cottage reopens Tuesday, June 2 for sales and donations. The new hours are Tuesday through Saturday, 10am to...
Read more
City of Coronado

https://www.youtube.com/watch?v=f0u7UKvI-JE&t=195sStarting next week, people can sit or lay out on the sand. Find out why and what is still restricted at the beach in...
Read more
Community News

The County of San Diego Health and Human Services Agency announced today that beginning on Tuesday, June 2, people will be allowed to sit...
Read more
City of Coronado

Passive Use of Beach Permitted Beginning June 2 San Diego County has announced that beaches may open June 2 for passive use, including sunbathing and...
Read more
Military

NAVAL BASE SAN DIEGO – The next ship to be commissioned and carry the Kansas City name arrived at its homeport in San Diego,...
Read more
Business

On Tuesday, May 26, the County of San Diego Health and Human Services Agency announced that houses of worship, hair salons and barbershops can...
Read more
Advertisement
Advertise Here (Get Rates)