A New Exhibit Opening October 1, 2016 at the Coronado Museum of History and Art 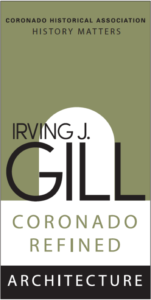 As part of a multi-site exhibition called New Architecture for a Great Country, multiple San Diego and Southern California cultural organizations have partnered to tell the story of Irving John Gill (1870-1935), an extraordinary San Diegan, and one of the key fathers of modern architecture.

Coronado has 14 known Irving J. Gill structures which showcase the evolution of Gill’s style from craftsman to cubist architecture, a style that he refined while in Coronado. Gill produced a venerable body of work throughout his career that has influenced generations of American architects and builders.

The Coronado Museum of History and Art invites the public to visit their newest exhibit, Irving J. Gill: Coronado Refined. The exhibit opens October 1, 2016 and is free to the public. Guests will experience architectural drawings, photographs, and models that visually depict the evolution of Gill’s style. USD School of Architecture and Woodbury School of Architecture partnered with the Coronado Historical Association (CHA) to create models of the Coronado structures.  An illustrated history book and merchandise will be available to compliment the exhibit and for sale at the Museum Store or at coronadohistory.org.

Also, GeoTour will be available free of charge so that enthusiasts can take a self-guided or online tour featuring street views of Coronado’s Gill Homes. Additionally, guided tours will be offered from October 2016 – March 2017. As a part of the Wine and Lecture Series, guest speakers will feature topics related to historic preservation and the influence of Gill’s work on American Architecture.  Prices and details can be found at coronadohistory.org.

Exhibitions and programs will also be held throughout San Diego County to explore Gill’s life and work. With presentations at multiple institutions, visitors will gain a broader understanding of his life, architecture, and legacy. His revolutionary ideas in building aesthetics and technology have permanently impacted the building arts for over a century. Public programs, panel discussions, lectures, architecture tours, and original publications will be integrated into this unique and expansive collaborative project. For a full list of events throughout San Diego, go to irvingjgill.org.

“The architect, Irving J. Gill, with the courage of an explorer in untraveled country, has boldly returned to architectural first principles – the line, square, and circle.”

Architect Irving J. Gill designed the Percival Thompson home in 1910.  Gill’s slow migration away from the Midwestern and Craftsman style of William Sterling Hebbard and towards Gill’s own stripped down, mature style.

Louis Wilde commissioned these “flats” during his tenure as Mayor of San Diego. Built in 1919, the structure bears the hallmark signatures of Irving J. Gill’s architecture – simple four paned windows with no ornamentation and stark, geometrical lines. His use of the straight line, cube, and arch are obvious when viewing the building.

The congregation of Coronado’s First Church of Christ commissioned Irving J. Gill to design and build this beautiful church in 1927. It clearly showcases Gill’s signature use of the straight line, cube, and arch as well as his desire to bring the outside in. The courtyard is an example of Gill’s use of flowers and nature to highlight to lines of the building and to use nature to paint the walls.

Sharp HealthCare, and its health insurance subsidiary Sharp Health Plan, will be the first health system to have early access to Amazon Halo. As announced by...
Read more
Community News

Sharp Coronado Hospital is pleased to announce it has been named a 2020 Guardian of Excellence Award® winner by Press Ganey. The Guardian of...
Read more
Community News

The Public Advocates Office, the independent consumer advocate at the California Public Utilities Commission (“CPUC”), applauds the CPUC decision that will make water bills...
Read more
Letters to the Editor

Submitted by Rick and Lanette PerrymanPerhaps at no time in our community’s history has there been such an overwhelming need for sound leadership, and...
Read more
Community News