Naval Base Coronado: State of the Base

Since assuming command of Naval Base Coronado (NBC) in August 2015, I have had the distinct pleasure of experiencing the area as a representative of your Navy and as a member of the local community.  I could think of no place better to work and play than Coronado and Imperial Beach!! That said, I would like to use this opportunity to share a few updates from the base.

As we begin to leave behind the wet weather and move towards summer, we are seeing more people bringing dogs to the beach.  As many of you are aware, dogs are not permitted on NBC beaches according to California state law and because even leashed dogs can disturb the habitats and scare the California Least Tern and Western Snowy Plover birds – both of which are protected under the Endangered Species Act.  It is our responsibility as good environmental stewards to protect these sensitive habitats.  These birds are easily spooked by curious humans and pets, which may lead to nest abandonment.  Additionally, trash left on the beach attracts predators such as skunks, crows, and possums, which hunt bird eggs and chicks. My staff is making every effort to educate our Sailors and civilians about this issue and we hope you will do the same if you see folks on our public beaches with a dog.  Good news is we can just send them to Dog Beach where Fido and his/her owners can play on one of the best beaches in the world! 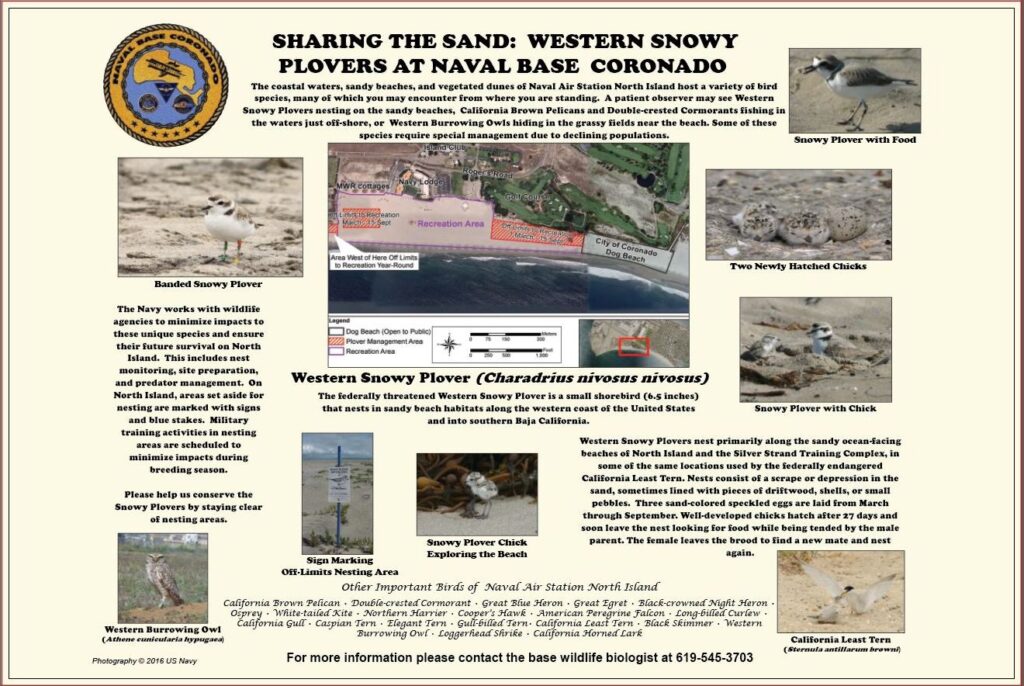 The Navy is committed to its stewardship of the environment and takes preservation very seriously.  In fact, while designing Coastal Campus, the protection of our environment was a primary concern.  For example, we account for nesting season during construction as well as monitor the noise decibel levels to ensure these protected species are minimally impacted.

We saw Congressionally-mandated growth in the special warfare community in the last decade and Coastal Campus will support our warfighters with adequate space and training venues that allow them to be prepared to carry out our nation’s business.  Coastal Campus itself is important because we currently have over 3000 members of the special warfare community in buildings not designed to hold that many people.  Coastal Campus will redistribute those same people across a larger area to facilitate their continued success and allow us to support technological requirements that did not exist when those buildings were constructed.

Our SEALs often train away from home.  Coastal Campus will allow them to train closer to home when not deployed.  Many SEALs live in Imperial Beach and Coronado and it is not uncommon for a SEAL to spend his whole career stationed here.  Coastal Campus will allow them to spend more time with their families when not on deployment, giving our elite warriors, as well as their spouses and children, more support on the home front.

We are dedicated to being good neighbors while supporting our warfighters.  I believe this can best be seen in the significant reduction of traffic slow-downs in the mornings coming into the NBC’s Naval Air Station North Island installation.  Not only do many of our tenant commands stagger their work hours to reduce the number of vehicles attempting to access the installation at one time, there are additional personnel assigned to the gates during the busiest hours to alleviate a bottleneck that could stretch down the street.

I am also proud to report NBC received recognition through the SANDAG iCommute Diamond Awards program as one of 33 organizations throughout San Diego County for outstanding efforts to encourage employees to use alternative transportation choices, such as public transit, carpooling, biking, and walking to work.

The award places Naval Base Coronado among the top organizations in the county providing a variety of commuter assistance and employer services to help reduce traffic congestion and greenhouse gas emissions.  NBC was the only Department of Defense installation recognized. We have also increased the level of traffic enforcement throughout the installations with the hope that good driving practices on-base will translate to good practices off-base.

Community partnerships are important to us because we are part of the communities we serve.  Although budget constraints do not allow us to do as many community events as we would like, whenever and however we are able, we try to support our community.  We have partnerships in place with local schools and whether it is helping to beautify a space or provide mentorship to students—we are committed to being a positive presence within our community.  This is our home. Our children go to school together.  We frequent the same local businesses. We are proud to be here, deploy from here, and make you our friends.  Thank you for your continued support to this base, and our warfighters and their families.