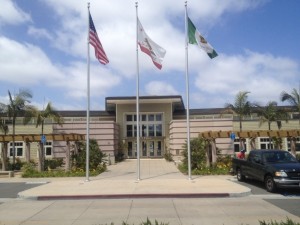 At its December 1 meeting, the city council swept through a light agenda sidestepping a few issues that might prove to be controversial down the road. Both involved parking. The council also approved a long needed fence on the Silver Strand and appointed new commissioners to serve on the cultural arts and civil service commissions.

The council was expected to vote on commercial loading zones in the alley next to the El Cordova Hotel and the Oxford Park Townhouses, but Councilwoman Carrie Downey asked that the agenda item be continued until the city council’s January 19 meeting. She said that the complex’s homeowners association had requested more time to provide comments.

The loading zones were relocated to the end of the alley last year for a 12-month trial after complex residents complained that delivery trucks parked in the alley blocked access to their garages.

Over the course of the year city staff visited the alley “intermittently to time and observe loading zone utilization and garage access, particular in the early morning hours.” Staff found that, despite a few complaints from residents, the new zone locations were working well.

The staff also tested access when delivery trucks were parked in the alley. They did find that access in the outbound direction required a three-point turn in some cases, depending on the length of car and the angle of its approach. Otherwise cars could travel easily through the alley, the staff report concluded.

Based on this test and its observations, the staff proclaimed the new arrangement “a success” and recommend that the city council “take no further action.”

Still there were calls from residents complaining about truck noise, illegal parking and early morning deliveries. The block has been a commercial zone for as long as Coronado has been a city (125 years). Besides the hotel, two of the city’s popular restaurants – The Brigantine and Miguel’s Cocina are nearby. The townhouses were built several decades ago.

The council voted to approve a $4,903,504 contract to Barnhart-Reese to build the new Senior Activity Center. Downey expressed some concern that people still thought of the facility as a senior center when in fact it will be a place where people of all ages can come and enjoy the amenities and activities. She asked City Manager Blair King to suggest a way or process to give the center different name.

“I don’t want to hold up the project for a small part of the contract,” he said in casting his vote. He does expect the parking issue to come back to the council for further discussion. He made the point at the meeting and with King before the council meeting and is confident that parking plans will be reviewed, he said in a phone interview after the meeting.

A typo in the staff report almost derailed construction of a new two-mile fence along the Silver Strand from the northern end of the State Beach to the Navy’s boundary line south of the Coronado Cays. The project was first proposed in 1994, but had been on hold for lack of funding.

In April of this year the State Parks director approved $100,000 in environmental partnership funds from an agreement the State of California had with Loews Resorts. With this commitment in hand the City of Coronado secured a $50,000 grant from the County of San Diego.

Downy pointed out that the plans actually called for the project to be completed before nesting season began, so as not to interfere with the endangered species’ winter breeding. “The goal was to get it done before breeding season,” she said.