Coronado has seen more than its share of star athletes. From water polo players advancing to the professional league, to our current football team becoming CIF champions last weekend, Coronado sports teams have housed many true talents. Soccer is no exception.

Olivia Lillegraven is a 2012 Coronado graduate and has spent the last three years at Washington University in St. Louis where she’s been extending her soccer career. Olivia was honored as UAA Women’s Soccer Offensive Athlete of the Week three separate times this season and four times in her career. eCoronado has all the details of this honor. Olivia was also named the UAA MVP this season and her team was the UAA Conference Champion! 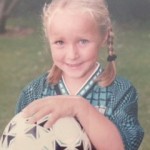 When she was just five years old, Olivia begin playing soccer. She played micro soccer then advanced to competitive soccer after four years. Olivia played for Coronado for quite a few years before joining a more competitive team where she was scouted by her current coach, Jim Conlon, at Washington University.

The decision to choose Washington University was by no means an easy selection. Olivia focused on two important criteria in her search. She says “I was looking at a lot of schools. I wanted a school that was very competitive academically, but also where I could play soccer and it would be a good team.” Looking back, Olivia feels like she made the right decision, often referring to her team as a family.

Olivia has had a long standing of being a standout star. During her sophomore year on the varsity CHS soccer team she was recognized for scoring a goal against the Dons in the Southern California Regional First Round. Throughout her soccer career at CHS, Olivia was a part of winning league all four years and they won CIF three out of the four years.

Olivia has been living in Missouri for the past three years but still feels the support from her parents back home, Cheri Lillegraven (CHS ’77) and Geoff Lillegraven. “Before I went to college I was having a rough year of soccer and wasn’t sure I wanted to play anymore. My parents were supportive – letting me know I could choose whether I wanted to play and it wouldn’t be bad if I choose that I didn’t want to.”

Despite Olivia spending most of her years playing forward, she has been transitioned to center mid during her senior year at Washington University. Of this change, Olivia explains, “I like it, we have a different formation now so it works better for my assets as a player. I am pretty strong in the air so it’s a good place for me.”

One would think that playing soccer for the majority of her youth would have completely prepared Olivia for challenges at the collegiate level, but she is the first to say how difficult it is. “We all try so hard at practice. It isn’t easy. Sometimes playing my teammates is harder than people I would play in the game.” She shares that her biggest challenge is “taking my competitiveness and channeling it into a positive way on the field. Keeping in mind I am working hard and not getting frustrated with myself or with other people.” Olivia compares practice at the college level to what she was used to in high school. “There is a lot of playing. We do a lot of drills but it’s pretty intense. You have to give your 100% every time, there is no jogging through it. Everyone goes really hard in practice and each practice is about two and a half hours long. We get one day off a week that we aren’t either practicing or playing a game.”

Even though practices are rigorous, her biggest surprise was about her relationship with her team. “I always expected it to be competitive but I was so surprised by how inviting our team is and the environment that we set. Even though we are fighting for positions, everyone has a role in the team regardless of if you are starting, if you are playing five minutes, or none; you are still important to this team.”

Although she has undergone more than her share of injuries, Olivia remains positive, “I’m not afraid of getting hurt. What’s the worst that can happen? You’ll get better.” She considers her injuries struggles that she has had to come back from, but it made her stronger. Olivia broke her ankle last year when she was in the midst of a good season; from that injury she says, “I think that it made it better my senior year, understanding that anything could happen. You just have to try your best.”

To students looking to play soccer at a college level, Olivia advises “You have to market yourself really well. You can’t just expect to get recruited. It doesn’t just happen. You have to put a lot of work into contacting coaches to see you play. After that it is a lot easier.” Olivia adds, “Work hard and make sure it is really what you want to do. Do it for you and no one else because you’re the one who has to play four years through everything.”

While soccer has been a huge part of Olivia’s life for the past 16 years, she has ambitious plans for after she completes her undergrad education. “I am taking the MCAT next semester so I can apply to med school. Tentatively, I want to be an orthopedic surgeon. I worked in the training room at CHS with Connie and I love sports medicine. Then I took an athletic training class my freshman year in college and have been working in the training room since then. I think that made me want to be a part of sports orthopedics. I want to be involved in the process of healing.”

Olivia is ambitious, competitive, friendly, but more than anything else she comes across as a very positive woman. Olivia derives a lot of good life lessons from her coach. “Our coach is really good at making sure that we know that we won’t fail as a team. You can have moments that you fail, but you won’t be a failure.”

Olivia’s team lost in the final game, however she was named All Tournament Team as well as the All American 1st Team and All Central League 1st Team.  The article is on the WashU Bears website.

As a result of COVID-19, the importance of mental heath has come to the forefront as an important aspect of maintaining resilience within our...
Read more
People

Many thanks to CBS 8 San Diego for alerting The Coronado Times to this “flashback video” that features Coronado!https://youtu.be/KMjwpZ-KtPAHere is the description of the...
Read more