As a retired captain with an engineering degree from the Naval Academy, and 30 years of service, Patrick Rabun could have easily found a high-paying, high-powered job at any one of the nation’s defense contractors or a big tech company. 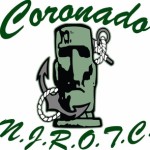 “In the Navy all my efforts went toward service. If I went to work for industry, my efforts would be toward profit,” he said. It was a culture that didn’t suit him. As a teacher he could make a “difference in a young person’s life.”

The one place he could make the biggest difference was in JROTC where there is a premium placed on good conduct and personal responsibility. Under the U.S. Code the NJROTC mission is to “instill in students… the values of citizenship, service to the United States, personal responsibility and a sense of accomplishment.”

JROTCs and ROTCs were established in 1916 by the National Defense Act to offer adolescents an opportunity to glean a sense of the rigors of military life.

Each branch of the service developed its own curricula.  The Navy’s includes navigational instruction, electronics and naval science. The Marine’s comprises volunteer service, marksmanship, drilling and color guard ceremonies. The Coronado program, which began in 2003, combines elements of all the maritime services – Navy, Marine Corps and Coast Guard. This year there are 104 students enrolled in the program, half are girls and one-third are from military families.

While much of the curriculum is military oriented — students drill and learn to shoot air rifles – these skills are only tangential to the program’s mission.

Field trips to military installations are a big part of NJROTC. In December they plan to visit the Coastal Riverine Group One in Imperial Beach, and in February the Marine Mammal facility near Point Loma.

Earlier in the term, Rabun and his students visited Reagan Library. The trip was a bit unorthodox he admits, but it allowed them to experience a piece of American history. The trip made Reagan and his times more real. Rabun commented, “These kids weren’t alive when he was president. To him he was just a guy from history.”

Community service is also a big part of their lives. “You’ve probably seen them helping with charity and civic group events, and performing Color Guard presentations for meetings and conferences,” Rabun said.

A native of Louisiana, he first looked to NJROTC programs in the south; but when he learned there was an opening in Coronado, he jumped at it for a host of reasons. “The community’s superb reputation was a key factor in convincing me to stay in San Diego, though the weather was a major consideration as well,” he said.

Being able to work with the sons and daughters of so many military parents was another reason. Having raised two daughters of his own, Rabun knows “the challenges faced by military families,” he said.

High school can be a scary place for some. NJROTC can provide a safety net, a familial environment to help a student not only survive high school, but thrive there. “For freshmen in particular, the family nature of the program is very beneficial. Joining automatically gives a student 100 brothers and sisters who want to see you succeed,” Rabun said.

Rabun brings decades worth of leadership skills to the program. His commands included the cruisers USS Valley Forge, the USS Cape St. George and the Cruiser Class Squadron. He knows it’s his job not simply to lead, but to inspire others to lead.

Often it is the upperclassmen that have been with the program since they were freshman that the underclassmen turn to for guidance. “In many ways the senior students run the program, developing leadership and planning skills,” Rabun said.  Few use these talents to forge a military career. Only about a quarter join the military after completing the program.

The self-confidence, people skills, discipline and sense of responsibility gained in NJROTC stay with the cadets their entire lives.