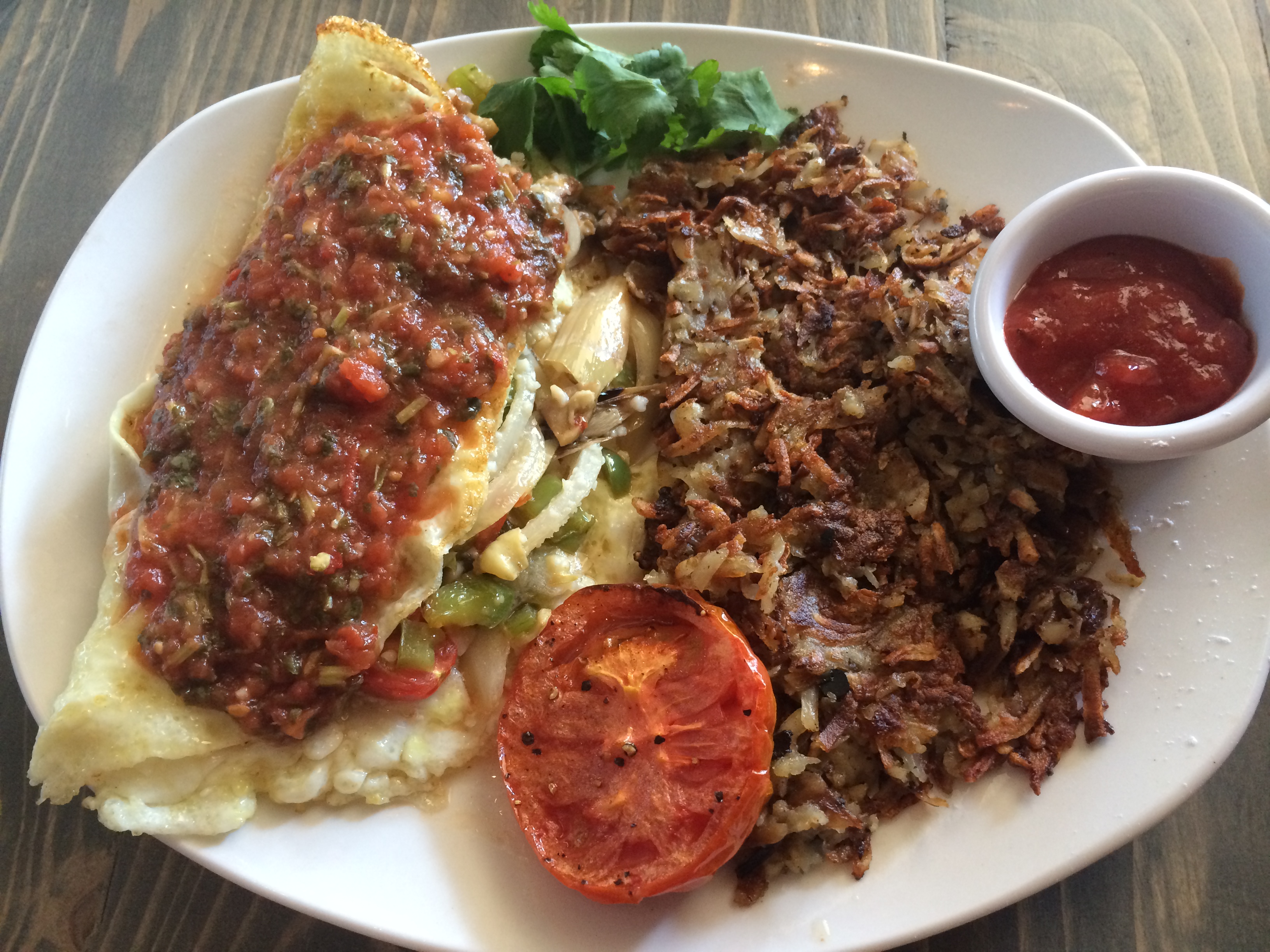 They say breakfast is the most important meal of the day, and according to Coronado’s newest restaurant Gustatory, it’s also the smartest. Islanders can “eat like a genius” at the new breakfast (and lunch) spot and start their day off right, whether it be with a cup of locally roasted coffee or a heaping stack of delectable buttermilk pancakes.

I love a good breakfast place, so when I heard that a new sheriff was in town, I was eager to try it out and bring fellow eCoronado.com staff writer Kellee Hearther along with me. During our visit, we had the chance to chat with the owner Anthony Audette, who shared his journey in the food service industry from humble beginnings as a dishwasher to owning his first restaurant in Coronado.

Audette, who hails from Wyoming, moved to Coronado in December 2013 from the Temecula area when he and his wife were expecting their first child. His is a story reminiscent of the classic American dream  he washed dishes to put himself through culinary school (he’s a graduate of Johnson & Wales University in Providence, Rhode Island) and rose in the ranks working as a chef for two years at the George Hotel and Restaurant in England before returning to the states. When he and his wife moved to Coronado, he purchased Sapori and kept it running while he finalized his plans for Gustatory. On Memorial Day weekend, he unveiled the new spot. 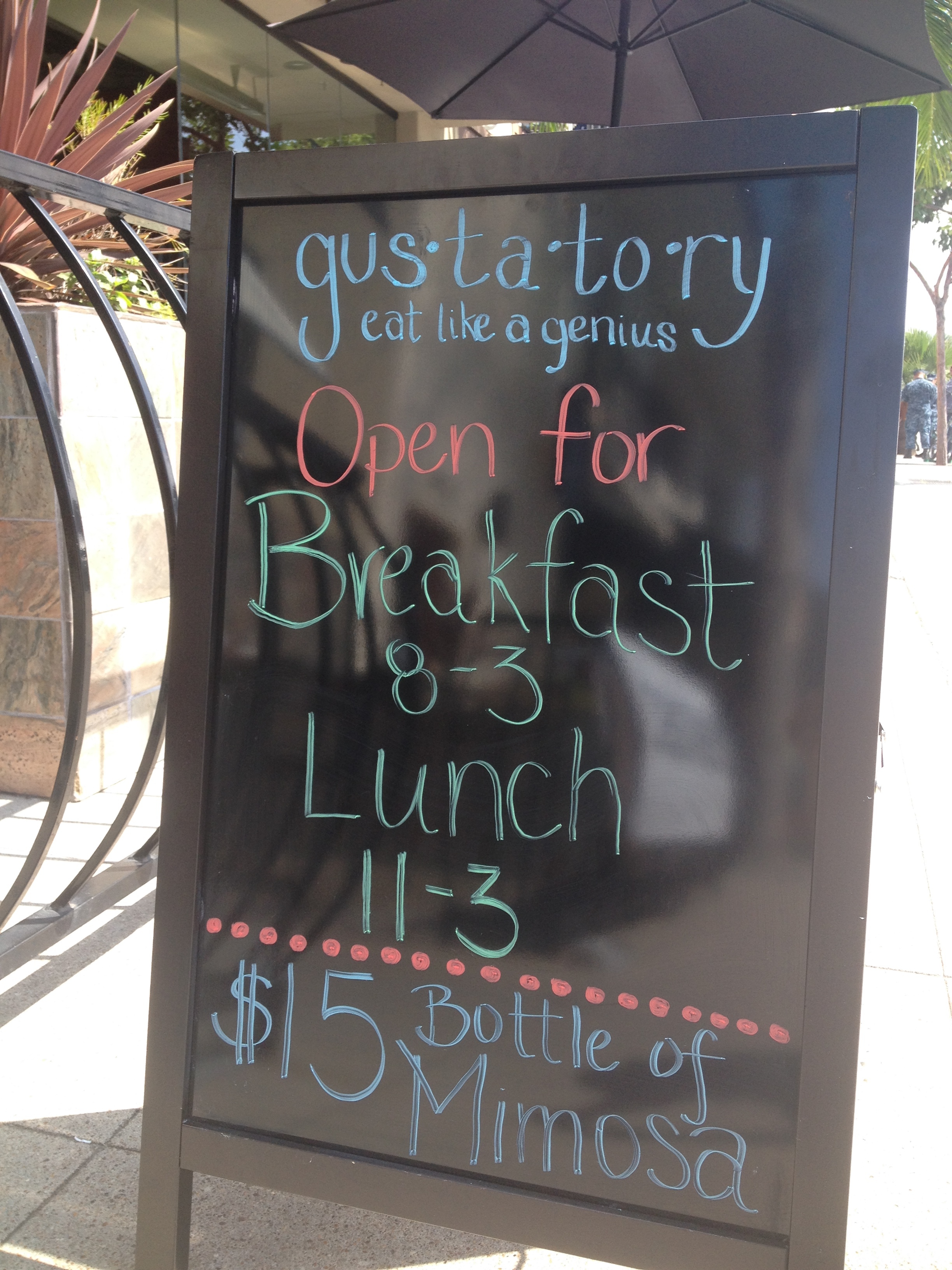 Gustatory means “to eat with pleasure, thought and purpose” and this couldn’t be truer for Audette’s menu. One look and we knew we were in for a treat. The breakfast menu features classic breakfast favorites with a twist. Audette puts a modern spin on comfort food  eggs fried in glorious bacon fat served with hash potatoes and a roasted tomato, a twist on a Denver omelet, and scrambled eggs with meat, cheese, veggies and house made sauce.

“Everything on the menu is recognizable,” he says. “I just put my own twist on it.”

Kellee and I settled on the “Everything but the Yolk” ($11.95)  an egg white omelet with seasonal vegetables and herbs, cotija cheese and fresh tomato salsa, served alongside savory hash potatoes and fresh fruit.

“It was the best egg white omelet I’ve ever had,” said Kellee. “The fresh, tasty veggies inside a light and fluffy blanket of egg whites with just the right amount of cotija cheese and topped with a savory salsa really hit the spot.”

Audette takes a careful approach to food and pays attention to even the smallest details  like the house-made ketchup to accompany the potatoes. He starts with Simply Heinz and adds his own blend of sautéed onions, herbs and spices to give it a unique, robust and unforgettable flavor. The little touches really do make the dining experience memorable. 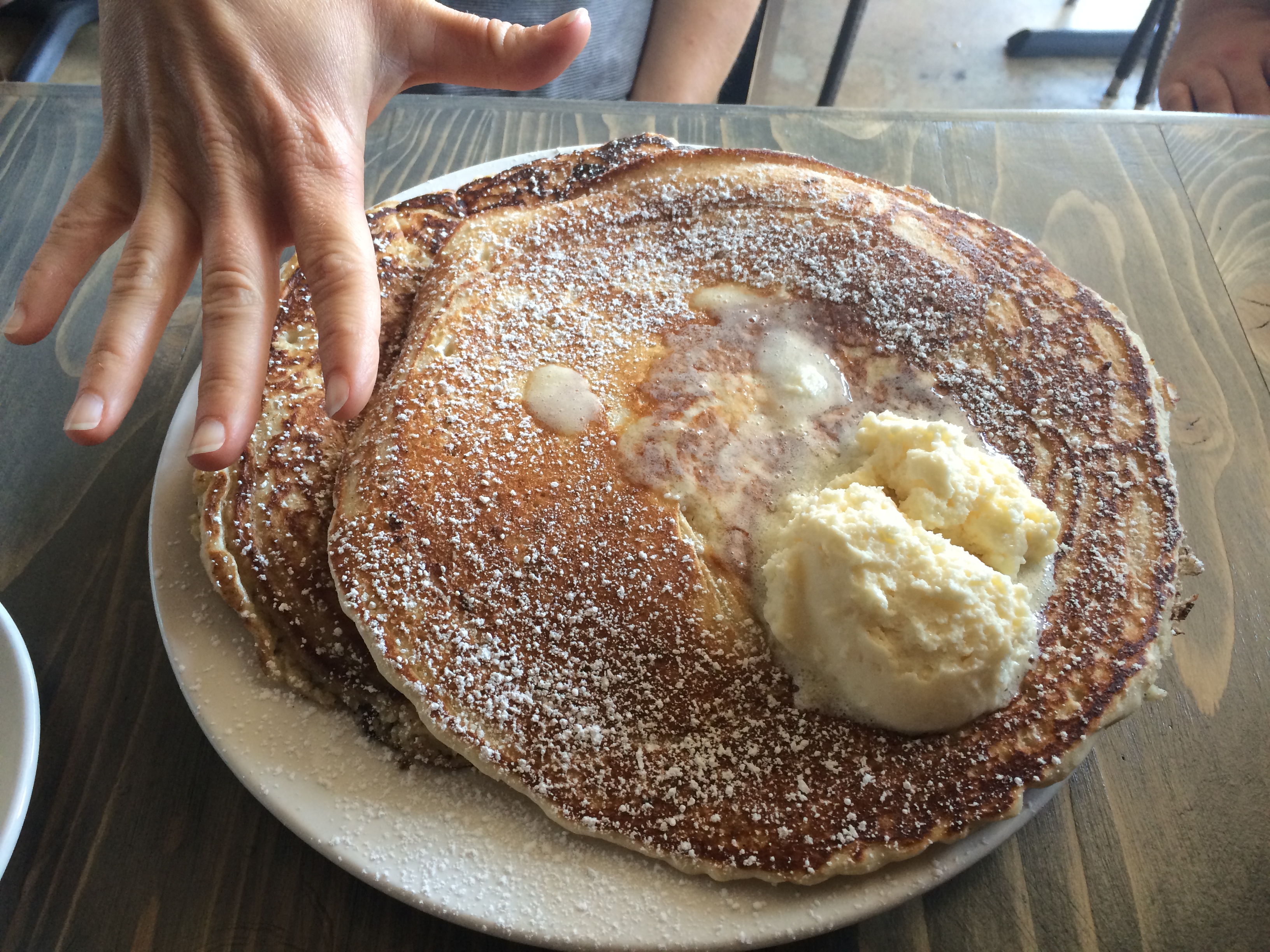 To complement our savory dish, we also decided on a heavenly pile of “Mexican Hot Cocoa Cakes” ($10.95) which are studded with chunks of Mexican chocolate and topped with cinnamon cream and chocolate sauce, also house made. The pancakes, which were larger than dinner plates, were warm, fluffy and perfectly crispy on the bottom. The chocolate sauce was meant to be drizzled atop the pancakes, but we found dunking a forkful worked quite well also. Other sweeter breakfast favorites include traditional French toast, nutty granola French toast and American French toast crusted with Frosted Flakes cereal. (I’ll be back in the near future to try the latter!)

Audette’s original menu for Gustatory was twice the size as it is currently. He explains that it will always be changing, as the staff’s tastes change and as they discover new things. As time goes on, guests will see creative specials. 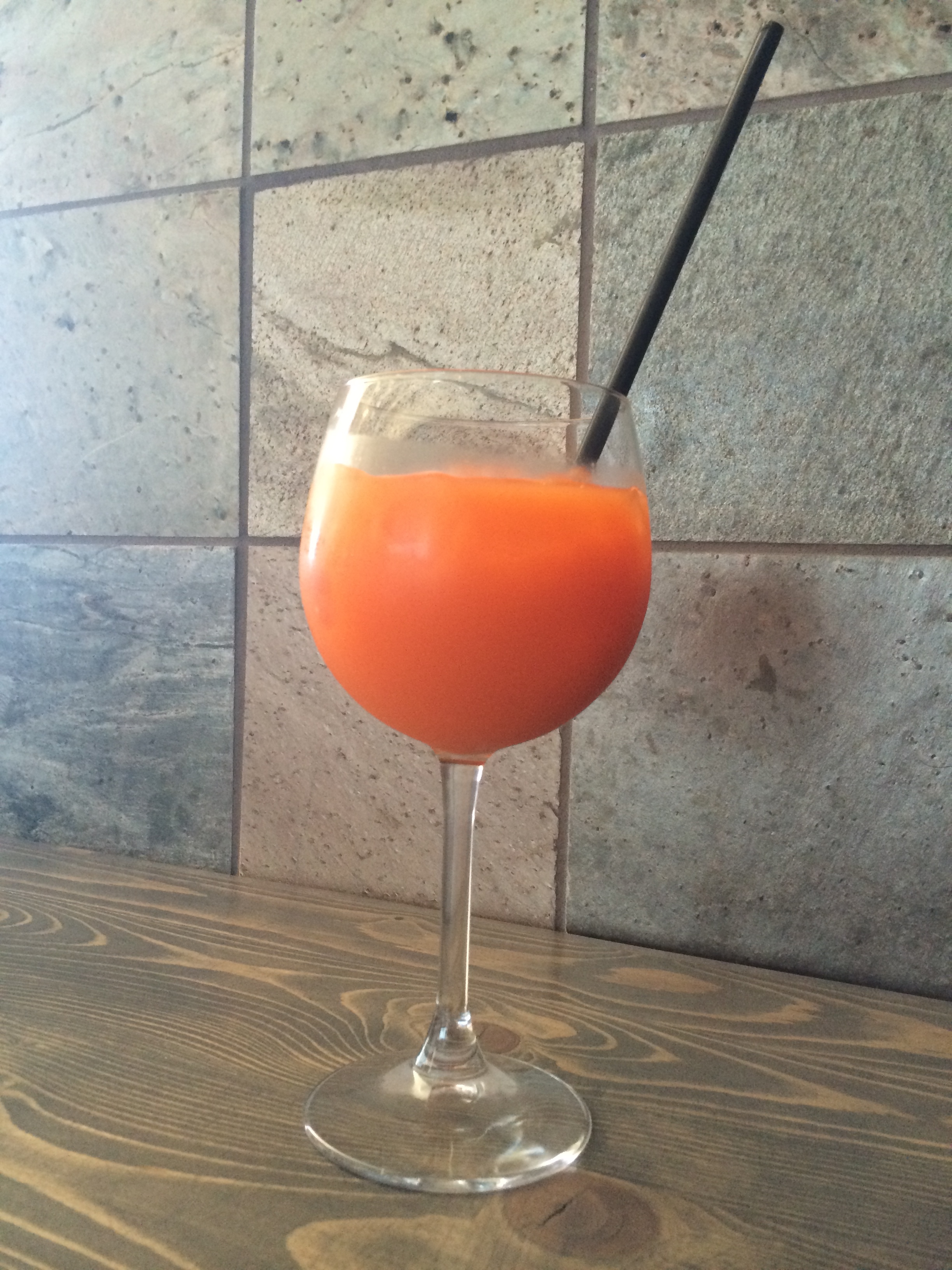 Aside from breakfast, Gustatory has lunch options with salads, sandwiches and gooey entrees like the “5 Cheese Mac & Cheese” ($10.95) as well as a variety of beer and wine cocktails. Fresh juices also compliment the breakfast options, and are near and dear to Audette’s heart. Refreshing juice options include “Perricone Farms” ($6)  fresh orange juice or grapefruit juice and lemonade or limeade, and color combo juices ($8) which offer a mix of kale, cucumber, apple, pink grapefruit, orange, carrot, lemon and cucumber. 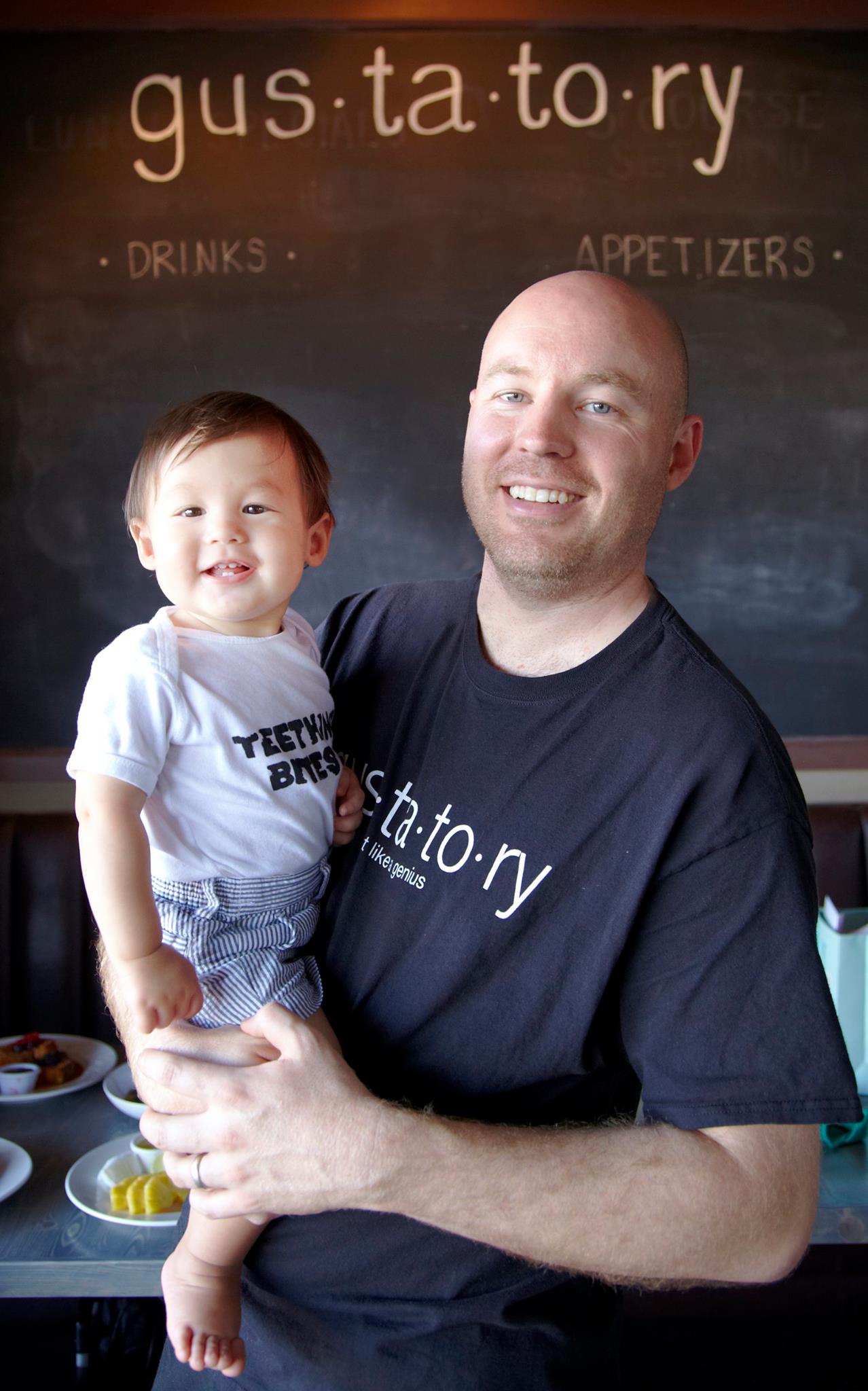 Much of the menu is locally and regionally sourced, which adds to the fresh tastes and unique flavors guests will enjoy. The juices are from Perricone Farms, jams come from Jackie’s Jams and coffee from Calabria Coffee in North Park, who created a special blend just for Gustatory. Audette and his teams also make weekly visits to farmer’s markets.

Audette’s vision for Gustatory has come to life just as he had imagined  a great place in the neighborhood to stop in for a cup of coffee, some juice or a muffin or indulge in a full breakfast and stuff your face full of pancakes. It’s a laid back atmosphere with a touch of class. A place to relax, read the newspaper and enjoy some downtime. It’s what he wanted as a resident and now he has passed along his vision to the community. He plans to focus on the core menu for the time being and add things as time goes on. Gustatory will likely remain a breakfast and lunch spot, offering Audette the chance to share dinner with his own family and most importantly, put his son to bed every night. It’s the best of both worlds, in one of the best places in the world.

BBQ in the Barrio