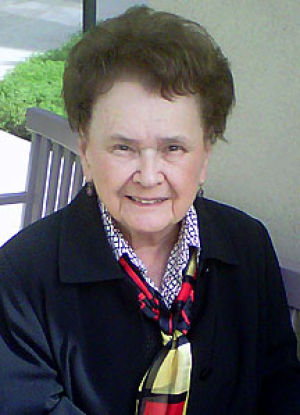 Stasia Dobrowolski, passed away at the age of 86 on Thursday, October 3, after a three-year battle with breast cancer. She was surrounded by her family and close friends. Until just a few days before her passing, she was lively and alert, taking an avid interest in her family, friends and local and world news.

Stasia was born in Pszczyna, Poland on May 13, 1927. Her father was a progressive headmaster and educator who spoke five languages and founded one of Poland’s first charter schools.

Her mother was an accomplished homemaker and seamstress. Stasia had a brother, Miroslaw (Mirek), who was three years younger than she. Her childhood was peaceful and idyllic, as she grew up surrounded by her large extended family of 13 aunts and uncles and numerous cousins. 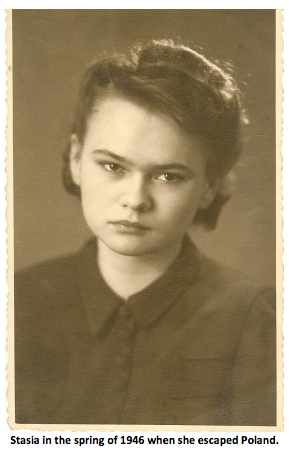 On September 1, 1939, when she was just 12 years old, Hitler invaded Poland. Her entire world shattered overnight when the family was forced to flee invading Nazi forces. Her father joined the Polish Army and eventually made his way to England, where he translated documents and assisted with prisoner debriefing for the Allies for the duration of the War.

Stasia remained behind in Poland with her mother and brother and, with the help of her family, escaped deportation to a concentration camp. In 1944, when she was just 17, her mother was killed during one of the final air raids of the war. Stasia and her brother (who had become very ill with nephritis) survived and the family again collaborated to enable them to escape the country just as Soviet forces were establishing control.

Traveling with just one change of clothes and falsified documents, she and Mirek crossed the border to Czechoslovakia on foot and made their way by train to Prague. She exhibited amazing courage and presence of mind during the journey, and managed to bring her dying brother to London and re-connect with their father just before Mirek passed away.

She met her husband of 56 years, Marian Dobrowolski, a Polish officer who fought in the Warsaw Uprising, while living in London after the war. They married in 1951 and then immigrated to the U.S. in 1956 carrying just two suitcases and $100. They became American citizens in 1961.

Stasia and Marian first lived in Indianapolis where he worked as a kitchen designer for a local architectural company. Their two children, Nina and Jeremy, were born in Indianapolis. 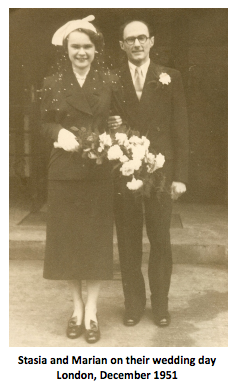 In 1968 the family moved to the Chicago area where Marian began working for McDonald’s Corporation. During his career with McDonald’s, Marian was transferred to the international division of the company and Stasia and the children relocated to Bavaria with him in 1972. While living there, the family was able to travel extensively in Europe. Later on, after they moved back to Naperville, Illinois, she voyaged with her husband on business trips all over the world, something she enjoyed immensely.

Stasia and Marian decided to move to Coronado in 1998 in order to be closer to her daughter’s family and to escape Illinois winters. She, along with her husband, (until he passed away in 2007), were well known around town at various restaurants, businesses and especially at the Coronado Public Library. She loved living in Coronado, taking long walks and being close to the ocean.

Stasia was a lively conversationalist and lifelong learner who spoke her mind on many topics. She kept up with current events, reading the daily paper cover to cover as well as books and other periodicalsin Polish and German as well as English. She collected and read books on a large variety of topics.

A dedicated patron of the arts, she enjoyed visiting museums around the world and attending the theater and ballet. During her years in London after the war, she saw many stage performances and debuts by some of the century’s most famous actors. She had a special passion for and extensive knowledge of opera, and was a season ticket holder with the San Diego Opera as well as Lamb’s Players Theatre in Coronado.

Stasia was a faithful friend to so many people, and an incredible correspondent, regularly writing letters to friends all over the world, many of whom she had known for over 60 years.

While she loved her native country of Poland, she embraced her American citizenship with pride and patriotism. She and her husband embodied the fulfillment of the American Dream and were part of that last Great Generation.

As a wife and mother she set an amazing example of love and faithfulness, often spoiling her children, their spouses and her grandchildren with presents. She was incredibly generous, with her time and energy, as well as with tangible gifts not only to her family but to the dozens of charities she supported. She literally gave something to everyone who asked and was always ready to help in any way she could.

She lived by the maxim was that the material things in life really didn’t matter too much. After losing so much during the war, she came to believe that what was truly important was family and friends, the memories you shared with them, an honorable character, life-experiences-and the beauty found through learning, nature, travel and the arts. She lived her life this way, storing up “treasure in heaven” through her generosity, kindness, forgiveness and love of all that God had granted her.

She was a devout Roman Catholic, and a woman of deep and tested faith, who truly prayed unceasingly.

She will be profoundly missed by her children, grandchildren, great-grand child and many friends all around the world.

Stasia leaves behind her son and daughter-in-law Jeremy and Denise Dobrowolski and their three children (of Rockford, Illinois) and daughter and son-in-law Nina and Tom McDonald and their five children, a son-in-law and one great-grandchild and her cousin Krysia Konwisorz (and family) in Alberta, Canada. The family is very appreciative of everyone who has helped them go through this difficult time, for all of the flowers, wonderful cards, letters and e-mails. We especially would like to thank her friends and neighbors at the Commodore, who were so faithful to help and be by her side in her last weeks. Thank you so very much!

A memorial mass will be held at Sacred Heart Catholic Church, 655 C Avenue, Coronado, CA 92118 on Friday, November 8 at 10 a.m. Stasia will be interred next to her husband, Marian, at Holy Cross Cemetery. The family requests that in lieu of flowers, donations be made in Stasia’s name to Catholic Charities of San Diego, 349 Cedar St., San Diego, CA 92101 (www.ccdsd.org/donate/how-to-donate/) or Sacred Heart Church’s “Ministry of Charity”, a fund that is used for the pastoral care of those in need in the parish. 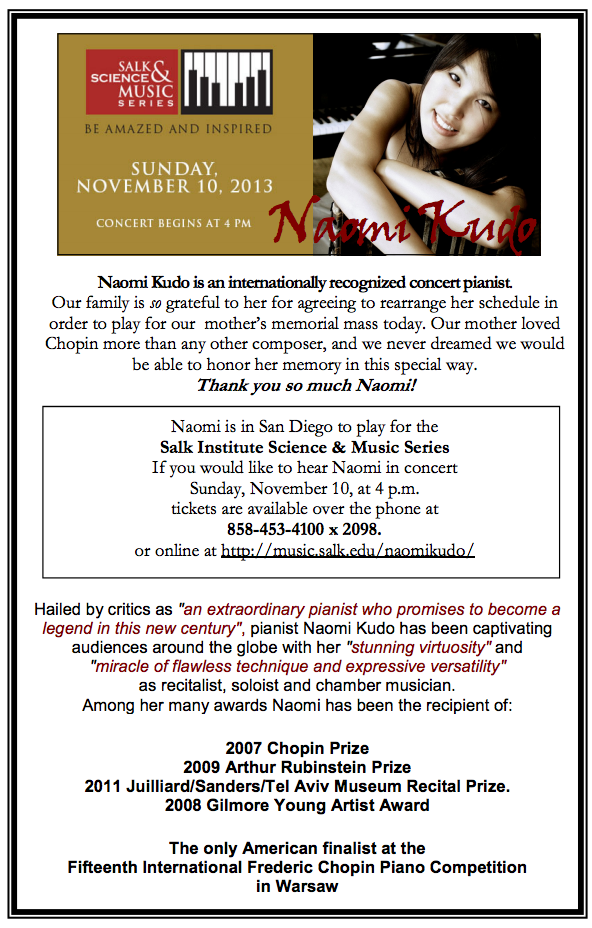