Thank you to the Coronado Police Department for making this information available to the public. This is a partial list: 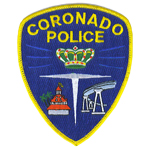 False Imprisonment
Coronado
Subject was visiting from Mexico wither her boyfriend when she woke up in a truck to find her arms were bound and she could not move, she became hysterical and asked other subject what was going on, the subject parked the truck on the shoulder of Silver Strand Blvd and tried to calm her down, the woman was able to free herself and exited the truck, the subject grabbed her in a bear hug, but she was able to break free and flag down passing motorists
5-2

False Impersonation
200 block of A Ave
unknown suspect impersonated the victim and used the victim’s personal information to fraudulently obtain $82,400
5-2

Battery on a spouse or cohabitant
Coronado
Married couple are involved in an argument while driving, female hits the seat rest of the victim and inadvertently strikes victim on the neck, the victim has no visible injuries, parties are separated without further incident
5-4

Battery on a spouse or cohabitant
Coronado
Two in a dating relationship got into a verbal argument which turned physical, one punched the other one time with a closed fist, one subject then grabbed the other by the shirt and pulled her from his vehicle and threw her onto the ground
5-2

Vandalism
300 block of Orange Ave
unknown suspect threw a brick at the victim’s vehicle and shattered the rear window, likely due to an ongoing disagreement
between 4-30 and 5-1

All information for the weekly police blotter is provided by the Coronado Police Department in the weekly press log. The information is gathered and organized into a weekly report provided by eCoronado.com. This is not a representation of all crimes that occur in Coronado. Some crimes may not be included in the report for various reasons. View reasons a crime may not be included in the weekly police blotter.

Details of this incident were published by the Coronado Police Department via their Facebook page:At 10:47 am morning, we received several 9-1-1 calls...
Read more
Crime

CORONADO  - Authorities issued an ocean-pollution warning for the Silver Strand Wednesday due to an influx of storm-driven sewage out of the Tijuana...
Read more

SPEAK OUT CORONADO Town Hall Meeting on May 14

Are you prepared for man-made emergencies and natural disasters? We want you to be prepared. Meet the following speakers and discover the tools to...
Read more
Uncategorized

Nearly two years after Rebecca Zahau was found hanging at an historic Coronado mansion, her family has filed a lawsuit demanding the case be...
Read more