“100 YEARS OF TENNIS
AT THE HOTEL DEL CORONADO:

PLAYGROUND OF THE STARS”

CORONADO – Ben Press was the head tennis professional at the Hotel Del for 28 years, where he entertained thousands of celebrities on the courts. He is a Coronado resident, a former tennis columnist for the San Diego Evening Tribune and has written for numerous tennis magazines and newspapers over the years.

In the world of tennis few have had the relationships or adventures of Ben Press. Now, at the age of 85, he has written a book called, “100 Years of Tennis at the Hotel del Coronado: Playground of the Stars.” It’s a pictorial tell-all of the once glamorous tennis courts that sat on Coronado’s white sand beach between the Victorian hotel and the Pacific Ocean.

“100 Years of Tennis” is a beautifully packaged coffee table tome containing 160 pages, 100 photos and a forward by Pam Shriver, international sports commentator and member of the Tennis Hall of Fame.

Shriver grew up playing on the hallowed tennis courts of the Hotel Del. “The vista from
the Del courts was my favorite,” recalled Shriver. “It had one of the world’s grandest hotels on one side, and the great Pacific Ocean on the other.”

“100 Years of Tennis” was four years in the making. The book opens with a history of the Hotel Del and photos of tennis players visiting the Del dating back to the 1800s.

Fittingly, the books poignant epilogue takes a look back at the ghosts of tennis past, and
the members of the Coronado Beach & Tennis Club  the average players with above average personality and a lust for the game of tennis who breathed life into the tennis program at the Del for decades.

The book is an accumulation of photographs and anecdotes no one else could possibly
have gathered or written, presented through the eyes and words of one of tennis’ great emissaries and all-around gentlemen of the sport.

“The courts are gone now,” said Press, “but at times the ghosts of tennis past still linger. I walked through the grounds of the Del just the other day, and I could still hear the harsh and familiar cries of the seagulls flying overhead. As I looked up I found myself remembering the sight of Air Force One gliding towards North Island Naval Air Station, a mere high lob from my teaching court. President George H.W. Bush and I were a pretty tough doubles team.”

The book captures the luster of the celebrity visitor ranging from players like Andre Agassi and Billy Jean King to household names like Walter Cronkite and football’s Tom Landry. Hollywood visitors are well represented through such tennis players as Errol Flynn, Gilbert Roland, Farrah Fawcett, Lucille Ball and Charlton Heston, just to name a few.

There will be a book signing at Bay Books Thursday, March 18 at 6:30 p.m. The author will be on hand to sell books, sign existing copies and share memories of tennis at the Del.

“100 Years of Tennis” is available at Bay Books, the Hotel del Coronado, the Coronado Visitor Center, or by visiting www.benpress.com. The book sells for $29.95 and is available in hard cover only. For more information on the author and the book, call or write (619) 980-2142 or [email protected] 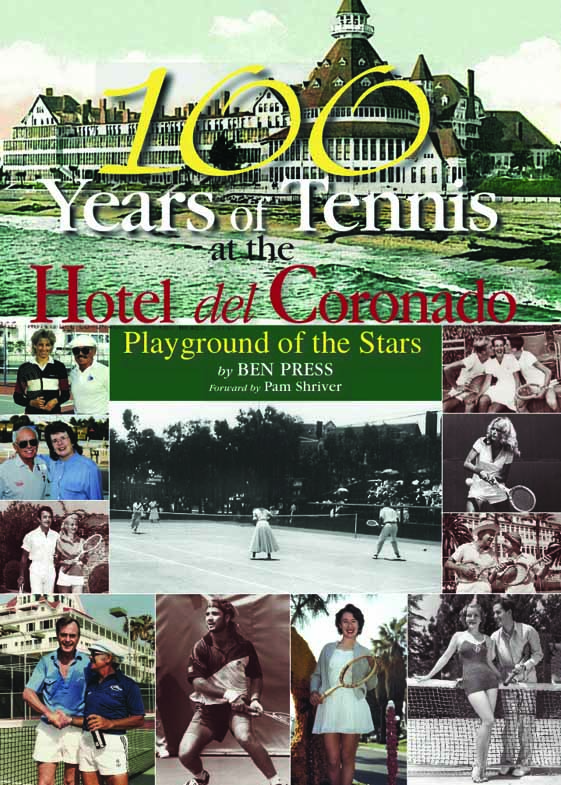 The book, “100 Years of Tennis at the Hotel del Coronado,” was four years

in the making and captures a special time in Coronado’s history. 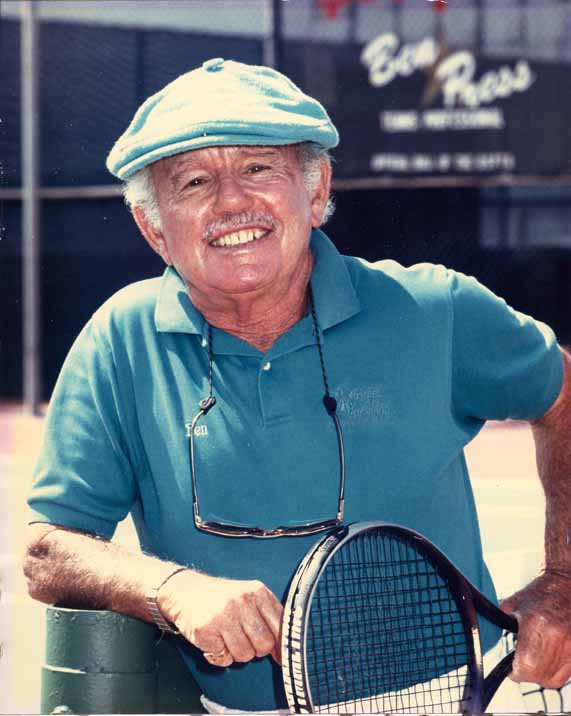 Hotel del Coronado, and a sage spokesman for Coronado’s golden years of tennis. 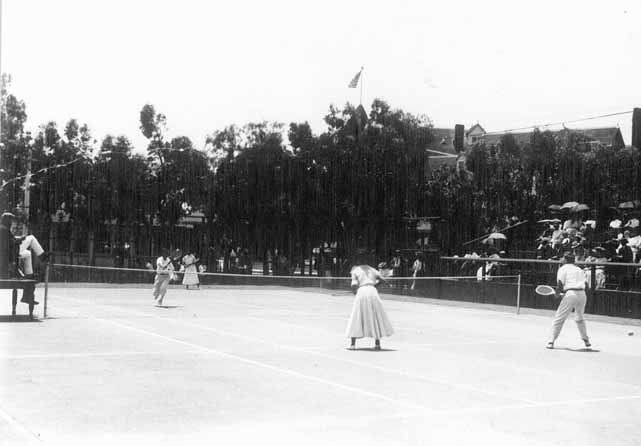 and a premier spectator sport, as evidenced in this early photograph. 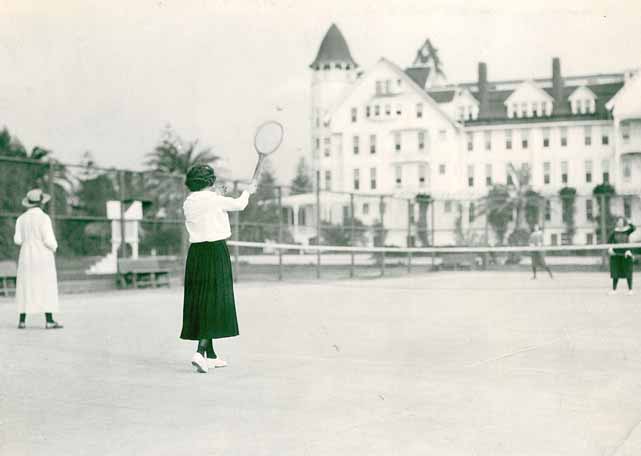 Victorian England is where the popularity of lawn tennis bloomed. Previously

a male only sport, it was soon to be a sport enjoyed by women too. “Properly 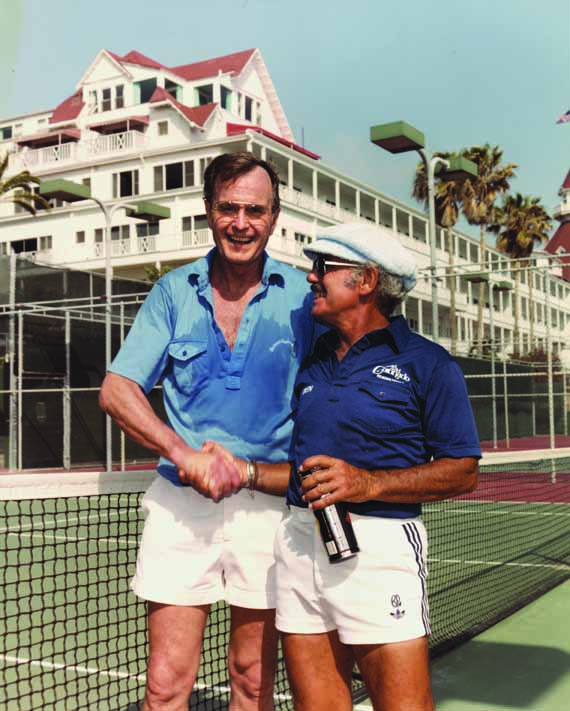 This President Bush was extremely competitive and carried his own weight on the court.

After all these years he continues to write to the author and share memories. 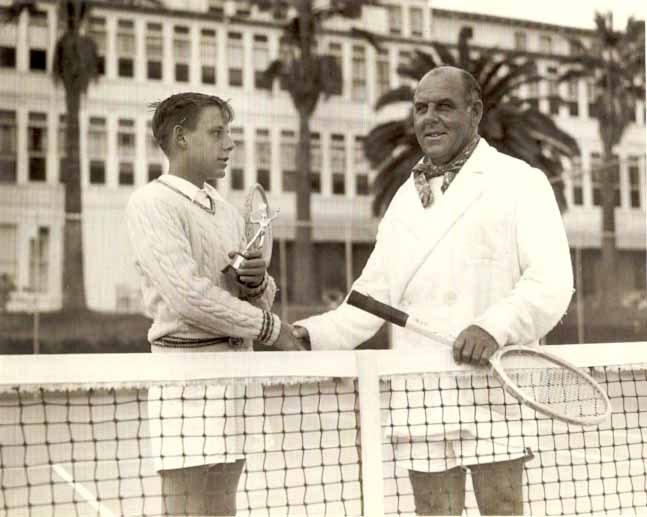 A young Nick Reynolds is congratulated by his father, Captain Stewart Reynolds, after

winning a junior tournament on the hotel’s courts in 1949. Nick later went on to be part

of the original Kingston Trio and a favorite Coronado son. 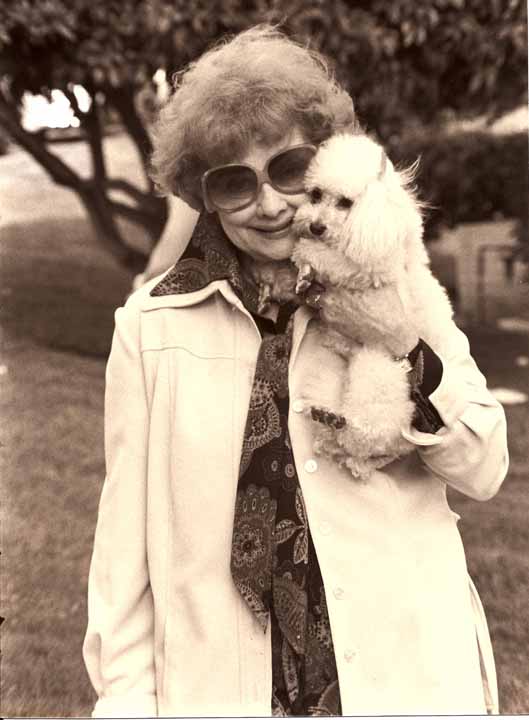 The great Lucille Ball was known for her acting, her comedy, and even for her dancing.

But she was a mother first and foremost. Here she is seen cheering on her son 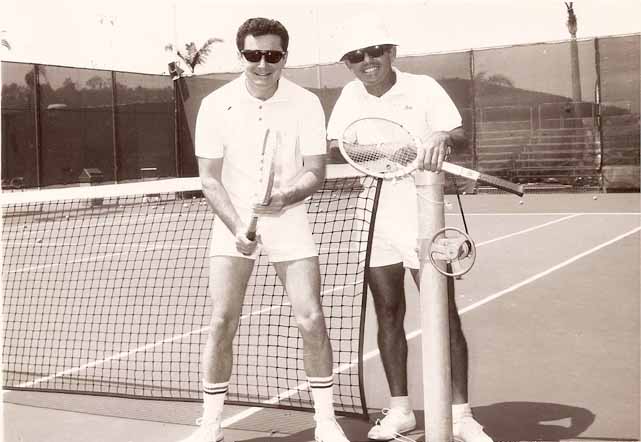 Regis Philbin has been called “the hardest working person in show business”.

a TV camera. His talents crossed into tennis as well. 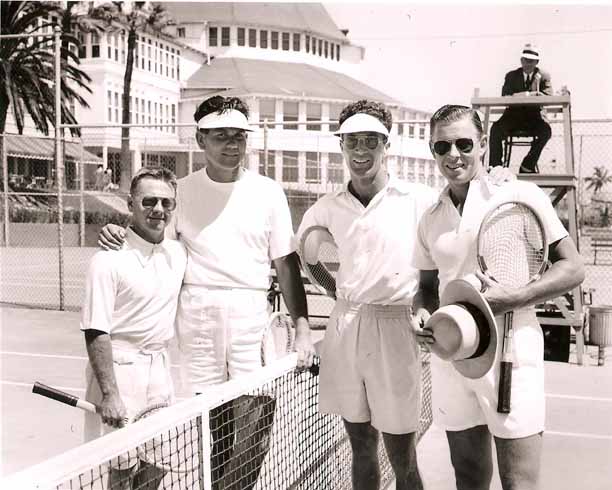 The pro-celeb matches and tournaments were always a big hit for audiences.

and George Murphy after a match on the Del’s legendary Court #4. 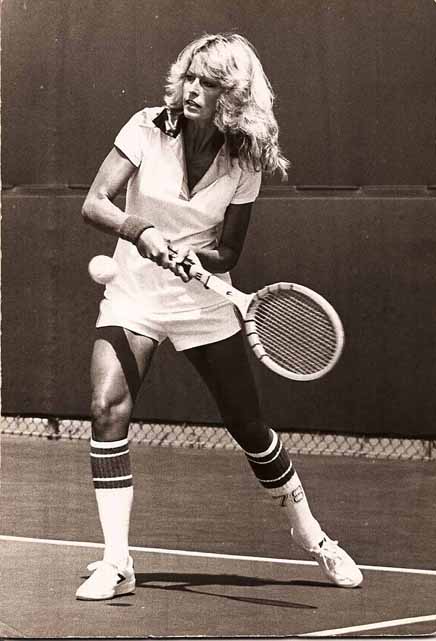 Some celebrities arrive with all the pomp and circumstance of royalty.

Others quietly check into the hotel and go about their business.

Farrah Fawcett burst upon the scene in the hit TV show “Charlie’s Angels,” 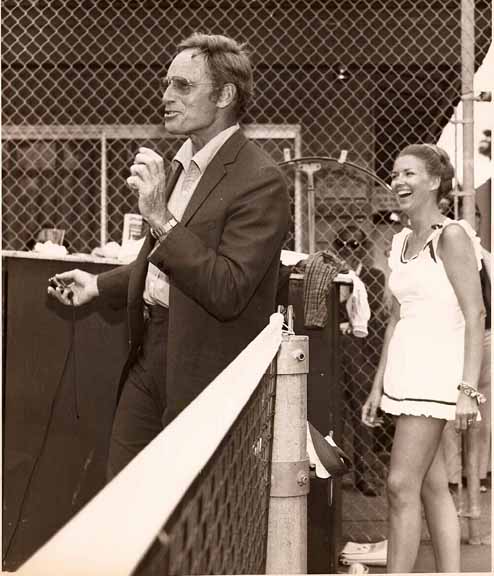 One of the great actors of all time, Charlton Heston. “We had ongoing monthly

doubles matches,” said the author. “and I’ve got to say that while he wasn’t

quite as good a player as he was actor, it wasn’t for lack of passion. 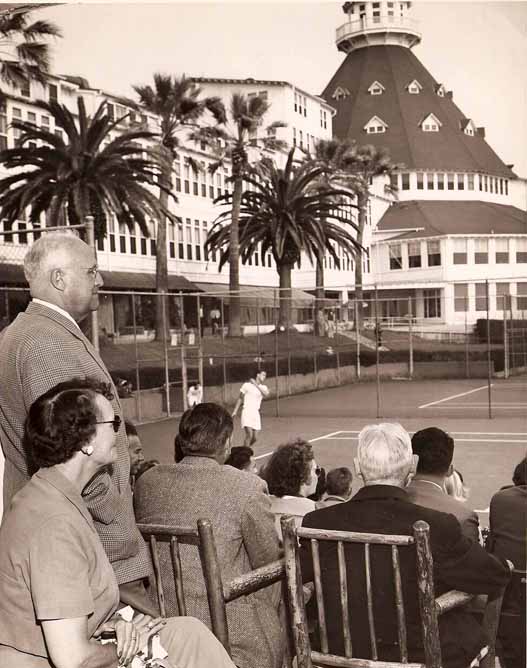 Tennis at the Hotel del Coronado is no more. The historic courts were removed

as a victim of “progress” many years ago. But many, many people 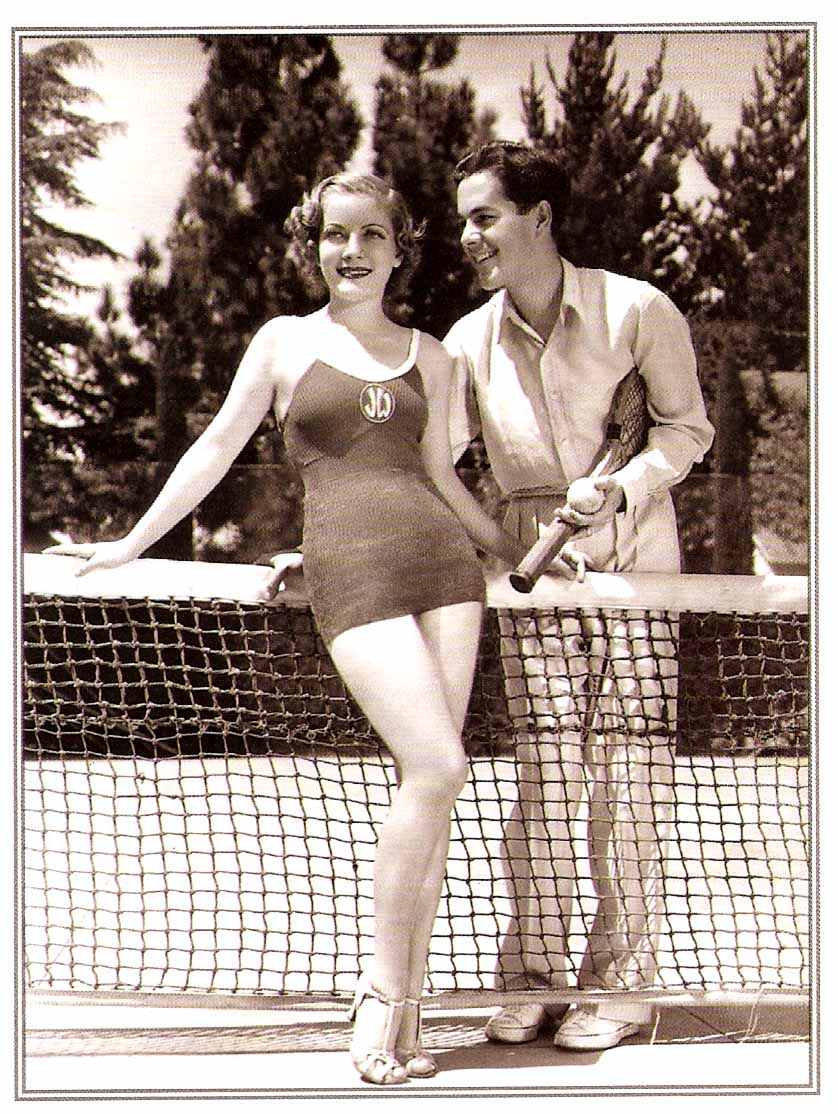 Johnny Downs was a child actor in the original “Our Gang Comedy.” He was a

song and dance man on stage and screen, and a successful adult actor as well.

Here is is seen with actress Betty Burgess promoting their film, “Coronado,”

a 1935 comedy shot at the Hotel Del and Tent City. Johnny retired

and raised his family in Coronado and was a serious competitor

on the Del’s courts for many years. Photo courtesy Ben Press. 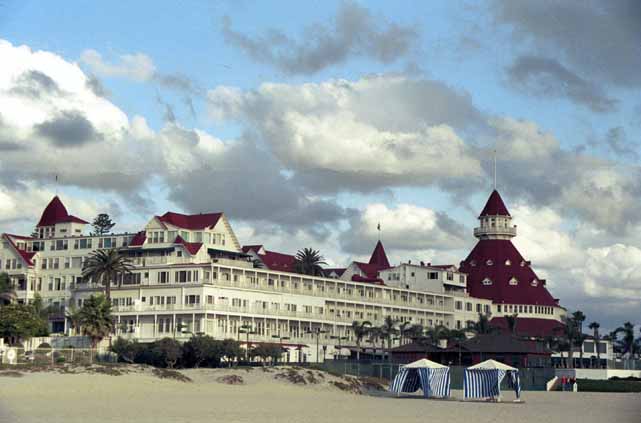 people from around the world since opening in 1888. The tennis courts may

be gone, but not the memories. Photo courtesy Hotel del Coronado.