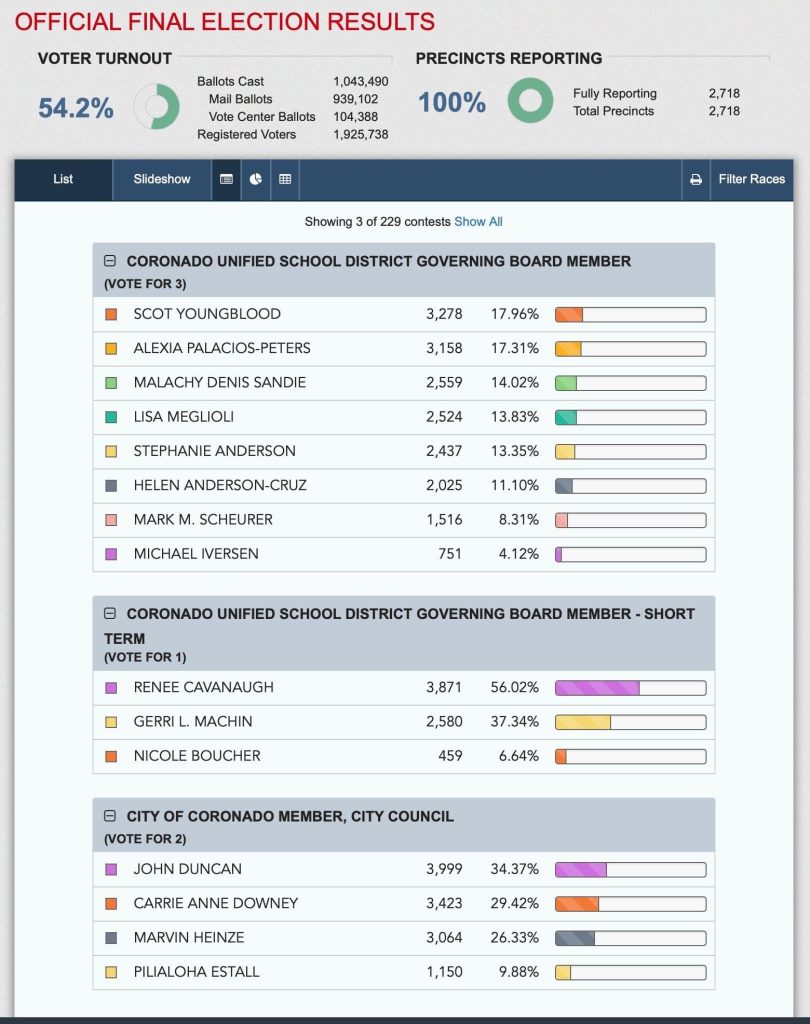 After a volatile and contentious campaign season, Coronado residents have chosen four new trustees for the Coronado Unified School District. The new board members, Scot Youngblood, Alexia Palacios-Peters, Malachy (Mal) Sandie and Renee Cavanaugh will be sworn in on Thursday, December 15th at the next school board meeting.

Youngblood, Palacios-Peters and Sandie secured full-term seats in a tight and heated race, with Youngblood taking just 120 votes more than the second seat winner, Palacios-Peters. Sandie took the third open seat by just 35 votes, narrowly edging out Lisa Meglioli. In the race for the two year seat, Cavanaugh took 56% of the vote to get the win over Gerri Machin and Nicole Boucher.

The official results, which were certified on Thursday, December 8, put Scot Youngblood at the top with 17.96% of the vote. Youngblood, an orthopedic surgeon and father of three children with Coronado schools, ran on the platform of academic excellence, parent advocacy and local control. He was endorsed by Mayor Richard Bailey and expressed concerns that schools had been overly politicized and lost their focus on academics.

Youngblood said he is honored and humbled to be elected as a Trustee for the Coronado School Board.

“Coronado is a very special community, and I look forward to serving in a responsive and transparent manner for all constituents,” said Youngblood. “I look forward to celebrating our successes and meeting our challenges in an open and honest debate.”

Youngblood shared that he recently carpooled with all the newly elected trustees to the California School Board Association annual meeting and enjoyed getting to know all of them personally.

“It was a great opportunity to put the campaign behind us and focus on bringing the community together in support of our local schools. I think we share that common purpose,” said Youngblood. “I know there may be disagreements, but our goals are the same:  the success of every student in Coronado public schools.”

Palacios-Peters, who won 17.31% of the vote, said her campaign focused on supporting all CUSD students. An attorney, a military wife, and a mother of three Coronado students, Palacios-Peters said she was thrilled to win a seat after a long and challenging campaign. She says her first priority is to establish strong working relationships with her fellow trustees, built upon mutual respect and open communication.

“Without that, we can’t accomplish anything,” said Palacios-Peters.

When it comes to policy, she says one of her top priorities is to review student academic achievement and to continue to build upon the recent positive results for the students’ learning recovery. This includes making sure the district has plans in place to support students at every level and give each one the opportunity for success.

“I believe we already have a wonderful school district, one of the primary reasons my husband and I chose to make Coronado our forever home,” said Palacios-Peters. “My messaging revolved around finding ways to incrementally improve and build upon our solid foundation at the local level.”

Sandie, who won 14.02% of the vote, said he was excited and surprised to learn he was elected. Sandie, a retired navy captain and defense contractor who is the father of four CUSD kids, shared a heartfelt “thanks” for the people who voted for him.

“There were some truly amazing candidates who have given so much to our community, and who did not get elected…specifically Helen Anderson-Cruz and Stephanie Anderson,” said Sandie. “I am very humbled by this opportunity.”

Sandie said he thinks his messaging resonated with voters who found him to be straightforward, tackling issues head-on in plain language.  His biggest priorities include hiring and retaining the best teachers and staff, providing solutions for the rising heat index in school classrooms, and offering a safe educational environment.

“I am a huge fan of Coronado public schools and can guarantee I will continue to support CUSD in its goal of ‘quality education for life’ for our students,” said Sandie.

Cavanaugh, who will serve on the board’s two-year seat, taught in Coronado schools for 15 years and served as the Chair on the board for Coronado Schools Foundation. She ran on a platform of identifying student needs and making research-based decisions to help prepare students for life beyond CUSD.

The new board members will occupy the seats vacated by Lee Pontes, Esther Valdes-Clayton and Bruce Shepherd. Helen Anderson-Cruz, who ran for reelection after serving on the board for four years, did not secure a seat.