After three years of research and development, Coronado Brewing Company has announced the launch of the company’s “Coronado Hard Cider.” Since its “soft launch” in 2021, the team at Coronado was faced with a slew of tough decisions before landing on the final recipe. “Coming out of the gates with an organic cider was a tall task,” said Clinton Smith, Chief Commercial Officer at CBC. “We exhausted every option in trying to obtain organic juice from our suppliers, but ultimately, we were unable. The recipe that we developed, using conventional juice, yields a super dry, delicious cider that’s uniquely Coronado. 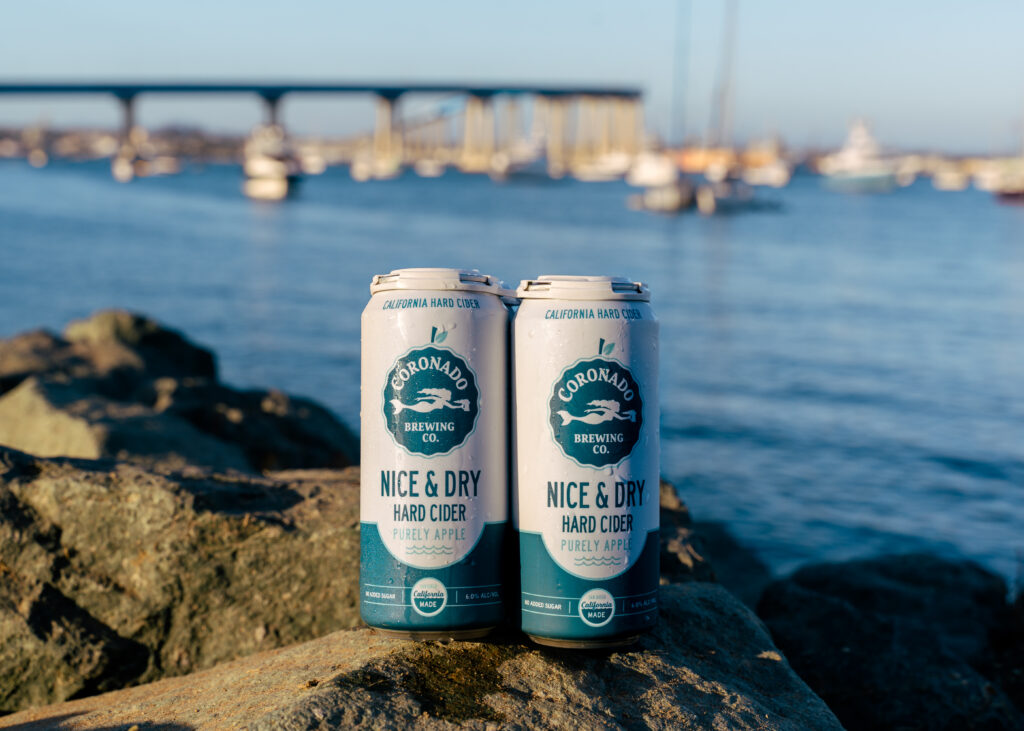 Coronado Brewing plans on growing their cider brands in California, building out their backyard in SoCal, and expanding into NorCal. “The plan is to obtain a strong foothold in our own home market,” Smith added. “Winning customers over one by one is the goal. We’ve added countless steps in the process to ensure we separate ourselves from the others while making an affordably priced 4-pack that we’re extremely proud of.” Coronado Hard Cider, made with apples grown in the Pacific Northwest, contains zero added sugar, zero added sulfites, and is both gluten-free and vegan. The new Hard Ciders hits the shelves this month.

The company has recently added two executive team hires to drive the business’ growth strategy: John Egan as vice president of operations and David Schreiber as vice president of sales. “We’ve been riding a wave of positive sales numbers since the wild year in 2020,” said CBC President Rick Chapman. “To sustain this level of growth, it’s important to add the right people to our team. With the team we now have in place, we are well positioned for years of success and continued growth down the road.”

Egan joins Coronado Brewing with more than 20 years’ experience in operations, supply chain management, and sales within the craft beer industry. He previously held leadership positions at Stone Brewing Company, Mission Brewery, and, most recently, Country Malt Group. Schreiber was promoted from director of sales to vice president of sales at CBC. Another brew industry veteran, he has served in progressive sales and business development roles over the last 15 years, including at Frank B. Fuhrer Wholesale, Lagunitas Brewing Company, and Beauchamp Distributing Company.

Raising the Bar with Q1 and Q2 Sales Growth

The Coronado brand family reports national distributor shipments are up 6.1% in the first half of 2022, with national depletions up 14.7% year-over-year. The company attributes its growth to its core portfolio of beers increasing in popularity in their own region. Coronado’s three top-selling beers: Weekend Vibes IPA, Salty Crew Blonde Ale, and newcomer Palm Sway IPA, all report double-digit growth year-to-date.

Year-over-year sales to retail volume in California, Arizona, and Nevada collectively is growing significantly, up 20%. “Our focus is to build in our backyard, and we have plenty of room to run,” said David Schreiber, Vice President of Sales for Coronado Brewing Company. “And as Coronado Hard Cider launches, it will only accelerate our growth.”

CBC’s Salty Crew Blonde Ale is another standout in the CBC portfolio. Launched as a multi-year collaboration with Salty Crew, a San Diego lifestyle brand, the beer has more than doubled its sales year-over-year with an impressive 103% growth. Previously sold as six-pack cans, it recently added 12-pack cans of the iconic “boat beer”, which is expected to further boost sales at off-premise chains.

Coronado Brewing Company is making waves not just in its own brewery, but throughout the California craft beer market. According to Nielsen data, in the first 26 weeks of this year, CBC’s sales have increased 13.7% positioning Coronado as the 16th overall brand family in the state and boasts the second-best dollar growth during the same time period among the top 20. Weekend Vibes and Salty Crew both rank in the top 60 brands in the state of California. “We see a very bright future on the horizon for the remainder of 2022 and beyond,” said Schreiber.