The unwavering determination of one woman named Sybil Stockdale started a courageous movement here in Coronado in 1966 which profoundly impacted the Prisoners of War (POWs) in the Vietnam War. She was way ahead of her time as a military spouse, taking the risk of speaking up during a time when that was definitely not the norm. The story about this military wives movement was documented in the book “In Love and War” by Vice Admiral James and Sybil Stockdale, and was brought back into the limelight with the 2019 publication of “The League of Wives: The Untold Story of the Women who took on the U.S. Government to Bring their Husbands Home from Vietnam” by Heath Hardage Lee. Both books are highly recommended reading.

In late 2019 through early 2020, the Coronado Historical Association (CHA) hosted an exhibit honoring the League of Wives, and a special presentation for the Naval Officer Spouses Club was held at the I-Bar. Learning about the courageous story of how these women made their voices heard sparked Brad Willis to consider the creation of a memorial to honor these inspirational women. He was a Coronado Arts Commissioner at the time, doing videos on culture and art in Coronado, and interviewed one of the original members Pat Mearns and author Lee on their insights.

Willis’ other connection goes back to 1990, when as an NBC Foreign News Correspondent he went with Senators John McCain and John Kerry as they returned for the first time to Vietnam to begin resolving the POW/MIA issue. While writing the mission statement for public art, he felt that the League of Wives memorial was the most important thing he could do, especially as the first statue to honor military spouses. As founder, he began by networking and building a team, mostly of military spouses, to propel this project forward.  They built a website, formed a 501c3 non-profit organization and collected 1,000 signatures in support of the project almost overnight.

They connected with Chris Slatoff, the artist who sculpted the Sheltering Wings art piece in the Cays, along with artist Elisabeth Pollnow, to generate ideas to represent the League of Wives. They went back and forth with the design committee and the artists, to come up with what they felt captured the enormity of what these amazing women accomplished, and because females are rarely featured in statues. This project is especially timely, as they hope to unveil it next year to coincide with the Vietnam POWs 50th anniversary.

Foundation Chairperson Alexia Palacios-Peters, an attorney and military spouse, said that the artists came up with some initial designs and the committee gave input along the way, deciding how many figures would be included, which way the heads were facing, etc. to best represent these women who had to overcome enormous obstacles to help their husbands. She points out that “what military spouses can do now is because of the barriers these ladies broke.”

The Foundation developed a presentation, statue, and location ideas, to show at the various city commissions such as CHA, the Cultural Arts Commission, the Parks and Recreation Committee, and the Library Board of Trustees, to gain input and approval. The cost of the statue is estimated at $343,000, which will be raised by the League of Wives Memorial Project. It was approved at a recent City Council meeting, with the city kicking in up to $100,000 for the installation costs. Two of the proposed sites were Star Park and the Library. City staff was asked to reevaluate location options that would potentially have more visibility for tourists and residents, but the location at Star Park was favored. The foundation will now begin actively raising the needed funds from a variety of corporate and private sources, as well as the military and veteran communities. An initial fundraising effort, conducted for Sybil’s birthday, garnered approximately $31,000 in pledges from the community.

Foundation Co-Chair Christina Bagaglio Slentz, a military veteran, military spouse, and hailing from a long line of military family members, shared that the orientation of the statue shows the uphill battle that the woman faced. When they realized that staying silent wasn’t working, they bravely chose to speak up to humanize their husbands, who were POWs in Vietnam, and not being treated humanely according to the Geneva Convention. 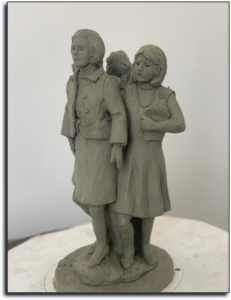 The statue highlights Sybil Stockdale as the leader with three additional women, representing the countless women who helped with the movement. There is also a blank position in the back, so the viewer can insert themselves to connect the past and present and be included in the story. The statue will be life-size, at approximately six feet tall, on a raised platform, made primarily out of bronze alloy, with minimal maintenance requirements.

Slentz noted, “They also paved the way for different roles for future military spouses. Previously, it was customary to look pretty and host parties. Even though they were expected to be careful with public and government engagement, they chose to push beyond those barriers. Since then, history reflects that military spouses have more of a voice.” This was a precursor to the National League of Families and helped develop a stronger relationship between military command and families. Today, organizations such as Blue Star Families provide advocacy and help connect families to needed resources.

What they accomplished was even more astonishing when you consider that this was before the internet and any type of social media. These women developed a network of spouses that worked as a communication pipeline; a true sisterhood intersecting in each other’s lives. It truly set them apart, as they went beyond themselves to impact their husbands’ situations. The original League of Wives ladies met monthly with Sybil up until her death in 2015, after which they met quarterly, but then stopped during the pandemic.  The new League of Wives Foundation organized a luncheon and got them involved in this project.

Coronado is rich with military history, but this is truly a profound military spouse story that deserves to be shared. It’s amazing to consider the courage of these women to start a movement that changed history and created a tremendous worldwide impact.

Learn more about the League of Wives in this collection of past articles and videos.