Written by The Zeller Family 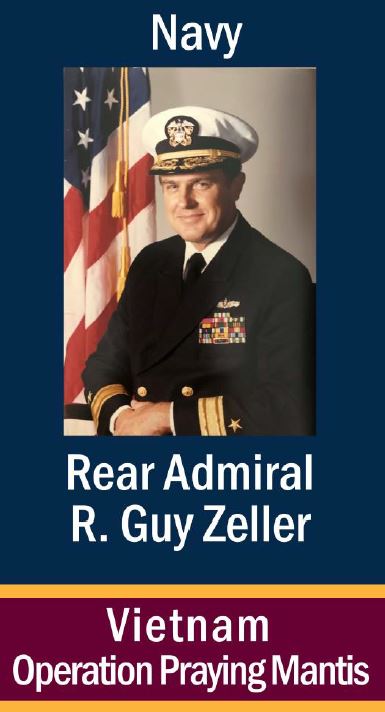 Rear Adm. Raymond Guy Zeller served proudly in the U.S. Navy from commissioning in January 1960 until retirement in November 1988.

Born in 1937 in Olney, Illinois, Zeller grew up in nearby Lawrenceville, Illinois. He attended the University of Illinois where he majored in industrial engineering. He was actively involved in his fraternity Chi Psi and in Naval Reserve Officers Training Corps.

After a tour as engineering officer aboard the USS Kenneth D. Bailey, Zeller earned a master’s degree in operations analysis at the Naval Postgraduate School in Monterey, California.

In 1967, Zeller shipped out to Vietnam where he was stationed in Saigon with Navy research and development and traveled the country extensively. After Vietnam, he reported aboard USS John Thomason as executive officer.

Zeller later reported to the Pentagon as military aide to then-Secretary of Defense Donald Rumsfeld. Developing a friendship with White House speechwriter James Brady, a fellow University of Illinois graduate, they learned they had grown up 20 miles from each other and dated the same girl though not at the same time.

With his wife of 58 years, Britt, and their two daughters Leslie and Kristen, now a retired Navy Captain and medical doctor, the family was stationed at naval bases around the country.

After retiring from the Navy, Zeller joined General Dynamics before becoming CEO of Helava Associates, a joint US-Swiss company specializing in photogrammetry and aerial photography.

In Coronado, Zeller served on the Armed Services YMCA board, Coronado Planning Commission, Coronado Mainstreet and Sharp Coronado Foundation board. He was a long-standing member of the Coronado Rotary Club, Coronado Money Men and the Crown Club.

Zeller died in 2018 and is buried at Fort Rosecrans National Cemetery.