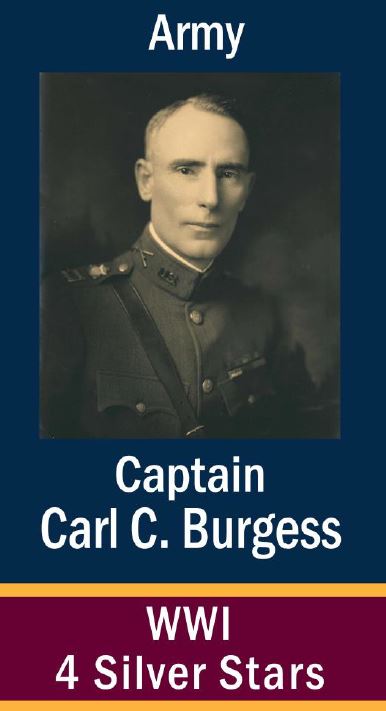 Capt. Carl Cooley Burgess was born on Nov. 11, 1880, in Lyon, Kansas, and lived in Atchison, Kansas. He registered for military service in 1899.

Burgess was in the Soissons, Vaux and Chateau-Thierry campaigns of World War I when he was in the regular army. Burgess had two foreign decorations and was awarded the Croix de Guerre of France for distinguished acts of heroism in combat. He was also awarded the Belgian War medal.

He was ordered from Camp Lee to New Orleans for a short stay, then he headed to Washington, D.C. There, he was decorated by three governments for valor in World War I.

Burgess got his military inspiration as a member of Capt. Greene’s Company F, 22nd Kansas. During the Spanish-American War, he was at Camp Alger. After the war, he worked at the Atchison Saddlery Co., but he enlisted in the Army. He headed to China during the Boxer uprising. He and his fellow soldiers, however, were stopped at Nagasaki, Japan, and sent to Manila. He was in the Philippines for three years, where he received his lieutenant commission. Very little is known here of the particular acts of heroism that resulted in the decorations he received but it is known that the Germans were driven back from Paris during those campaigns in France. He carried two wounds and his war relics have been on display in the Ramsay windows.

On Sept. 18, 1918, Lt. Burgess returned home from France. He became an instructor at Camp Funston, an Army training camp in Kansas. He retired a career Army officer in 1925. He was cited by Marshal Philippe Petain of France, twice for bravery, and he received the Chevalier of the Crown from King Albert of Belgium. He also was cited by Gen. John Pershing for his bravery with the infantry at the battles of Vaux and Chateau-Thierry.

Capt. Burgess died in Coronado in 1958 and is buried in Fort Rosecrans National Cemetery. He is survived by his grandchildren Donald Warfield and Carol Paseman.