After a first semester of trials and tribulations, I was elated to step foot on Coronado High School (CHS) grounds for the first time as a freshman on Friday, February 5. It had been nearly a year since I had entered a classroom, and my experience on campus was unlike anything I ever could have imagined. In this second article about “the life of a quarantined teen,” I will share my account of my “first” day of high school.

I woke to the sound of my piercing alarm at 6:13 am. Excited to begin the day, I shot out of bed, ate breakfast in a hurry, and quickly dressed. During my two-block route to school, I couldn’t wrap my head around the fact that this was going to be the first time I entered campus as an Islander. My schedule for the day consisted of three classes: E, fourth, and fifth period. Since it was the first week of in-person learning, only 25 percent of those who opted to return were present. Students with a last name starting with A through E had returned on Tuesday, F through L on Wednesday, M through R on Thursday, and S through Z on Friday. Mondays are to be virtual for the rest of the school year, no matter what phase of reopening we were in. 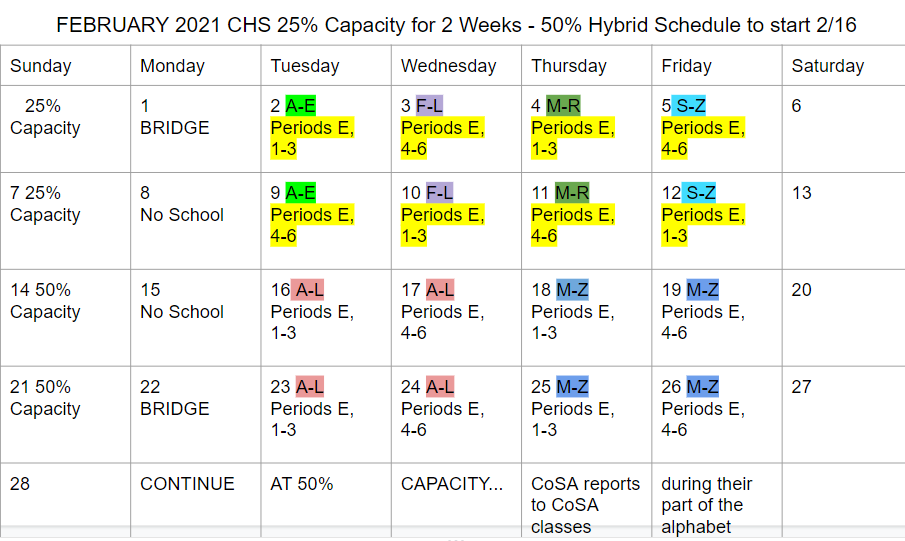 Donning a mask, I entered Niedermeyer Field through the gates on 7th Street for ninth grade physical education, which is taught by Mr. Jeffrey Beckley and Ms. Robin Nixon. Hand sanitizer was provided at the entrance to the track, which I used generously. Only four other students were present during E period, the smallest class size I have ever experienced. We were instructed to place our backpacks next to brick pillars along the fence, which were spaced out more than six feet apart. After Mr. Beckley gave a brief introduction, my classmates and I completed a seven-minute Tabata workout, consisting of jumping jacks, push-ups, squats, flutter kicks, burpees, and other forms of tortuous exercise. We were required to wear our masks throughout the workout session while also maintaining a minimum of six feet distance from others. Breathing through a mask while breaking a sweat made the exercises that much harder to complete.

Afterwards, we joined the Navy Junior Reserve Officers Training Corps E period class to compete in a game of COVID-style soccer. Each player claimed a five-yard line on the football field, and teams were formed depending on whether your marking ended with a five or a zero. The goal was to pass the soccer ball to each of your teammates without the opposing team stealing it and ultimately have one player cross the sideline. The sidelines were considered the goals, and players could only use their feet and lower body to touch the ball. With the combined classes, there were ten people total with Mr. Beckley joining the game as well. We played four rounds with each team scoring twice.

During the forty-five minute E period session, I was successful in raising my heart rate and completing my workout for the day. Looking back, I now realize that my first official class of high school consisted of jumping jacks and a modern alternative to soccer, which I gather not many can make claim to.

As I made my way to the 7th Street entrance, students were required to hand in their COVID permission form, which highlights the safety actions of CHS faculty, precautions families needed to take, and suggestions to keep everyone safe. I met with my best friend, who fortunately has a last name in my same letter group, and we chatted until the bell rang, signaling the start of passing period. CHS Principal Mr. Shane Schmeichel was positioned on top of a lunch table in the middle of the quad, megaphone in hand. He reminded us of social distancing procedures as well as safety measures and encouraged us to seek help from staff members if needed. Whiteboards were located at the bottom of each staircase, which helped Islanders find their classrooms. Hallways were directed in a one-way flow, and lockers were not available for use.

My fourth period class was anatomy and physiology, taught by Dr. Jarret Welsh. He was not present, so a substitute teacher instructed us to take a seat at one of the many desks. Each desk, spaced six feet apart from the others, had a three-sided plexiglass barrier as well as a bag of sanitizing wipes. While my class has nearly thirty students, only three others were attending in-person. Our substitute struggled with technology issues for the first several minutes as she attempted to host the usual Zoom meeting for those at home. My classmates and I were eventually able to fulfill Dr. Welsh’s lesson plans and watch the movie Concussion, which featured Will Smith in an enticing story about the discovery of football-related neurological deterioration. Each student had been advised to bring his or her own personal computer, and we all signed on to the Zoom meeting with our fellow classmates at home.

At 9:25, the bell signaling the end of fourth period rang. There were two bells spaced two minutes apart; the first for the release of odd numbered classrooms and the second for even numbered classrooms. Passing period was slated to be thirty minutes long because that’s the screen time break between classes for those at home; it’s too short to leave campus yet much longer than a normal non-pandemic morning break on campus. Fortunately, my best friend’s older sister gave us a tour of the campus and showed us where our next classes were.

Since I have an E through 5 schedule, my fifth period and last class of the day was ninth grade English taught by Mr. Micheal Dwinell. Similar to anatomy and physiology, desks were spaced six feet apart with plexiglass barriers and a bag of wipes on each. The windows and door were also open to let air flow throughout the room. A substitute teacher was in the classroom. Five other students were present in-person, and we logged into Zoom to view our lesson. Our substitute’s Zoom screen was projected on a whiteboard at the front of the classroom. A camera directed at us students at our desks allowed Mr. Dwinell to see those who were in the classroom, and we were also required to turn on our device cameras to prove that we were participating in the ninety minute lesson. Our schedule for the day included reading an excerpt from Romeo and Juliet, reviewing vocabulary terms, taking a literary terms test, and watching and taking notes on a portion of a documentary about Shakespeare. We were allotted two five-minute breaks in which I stretched my legs. At 11:30, I was released for the day and made my way to the quad, where I met up with two friends. 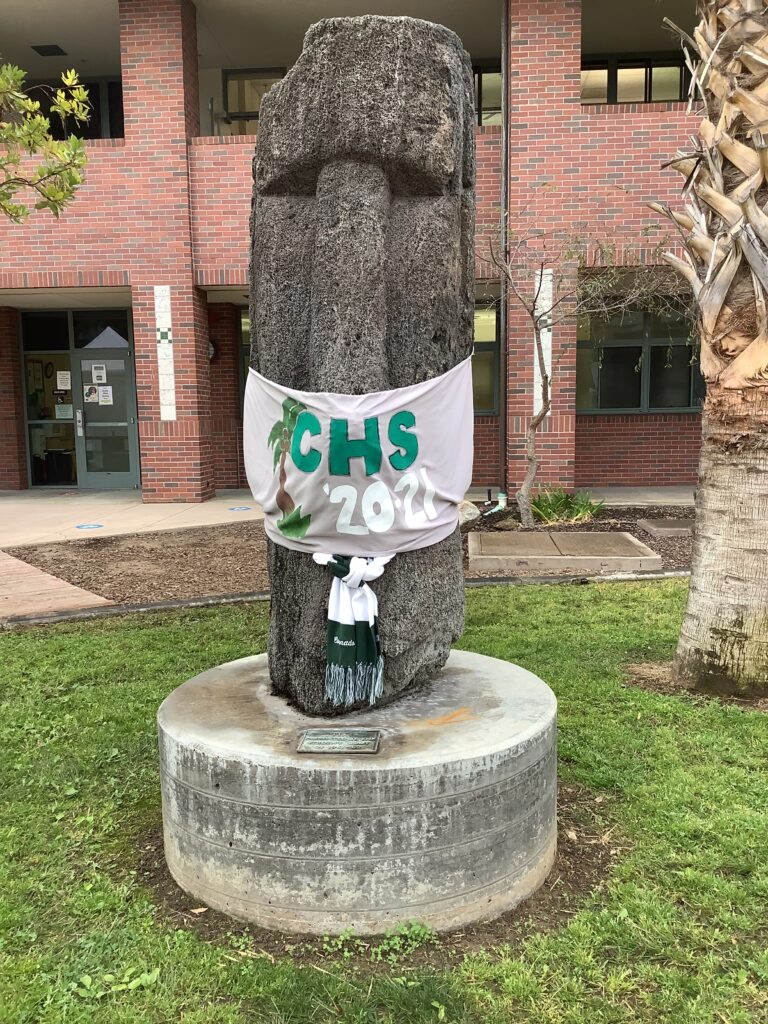 Looking back, I could have never imagined starting high school online, then attending campus for the first time at the beginning of the second semester. This experience was surreal and provided me with an eye opener on what the future of learning and education could look like.

Assistant principal Mr. Timothy Hopper shared that there were many successes in that first week back at school. “The students appeared very happy to be back. There were many smiles, and many thank yous from our students and our parents,” he said. “What I hope to see in the coming weeks is students giving each other and their teachers plenty of space in their classrooms and in the quad. It may feel strange to stand six feet apart with masks on, but we need to follow guidelines so we can keep each other safe and keep school open.”

His advice for Islanders during these unpredictable times is to be flexible and ready to adapt to changing circumstances. “We must endure the temporary discomfort of distancing and masks for the long-term reward of keeping each other and our teachers safe,” he explained.

Overall, I am grateful for the opportunity to attend school on campus for the first time in nearly a year, and no matter what happens in the future, I am sure I will never forget my “first” day of high school.

Bella Villarin
Bella is a proud military brat who has been a resident of Coronado since 2015. She was born in Japan, and after a short stay in Virginia, traveled extensively throughout Asia while living in Singapore and picking up another language. A junior at Coronado High School, Bella can be found at the driving range or golf course when not in school, studying, writing, playing the guitar, or spending time with her family. Have news to share? Send tips, story ideas or letters to the editor to: manager@coronadotimes.com