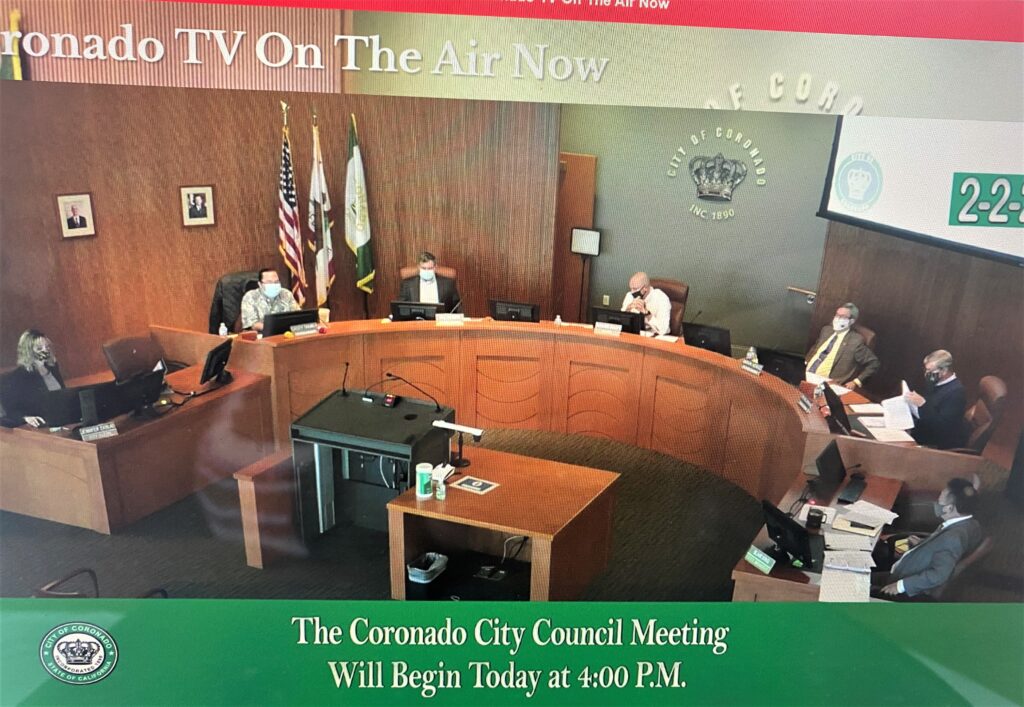 As with most council meetings, the Mayor began with a presentation. This one was to bestow a proclamation to the “Host a Hero” program, debuted by “The Old Goats” and “Kids Who Care” organizations, who began honoring wounded warriors twelve years ago.  This year, due to the pandemic, they created this new program to honor veterans and City of Coronado First Responders, as well as to help local restaurants.

The council had a lengthy discussion on the Community Grant Program, which has gone through several changes in the past year, including a cap of $1 million in funding with a more comprehensive application process. Councilmember Heinze was a big proponent for getting the funds distributed to the community groups earlier than the proposed July date and the other councilmembers agreed.

The staff recommendation for FY 2021-22 included updated dates and a maximum of $130,000 per organization. They felt this would allow organizations to better set award expectations and ensure access to grant funds to more organizations.

There was a discussion on whether or not grant monies could be used for salaries and a market evaluation found that other cities fund salaries with their grants. Assistant to the City Manager Dominique Albrecht said that staff recommended “keeping the status quo for this COVID environment” and said grantees will provide detailed information on how monies are spent on their grant applications, which will help with the evaluation and distribution process. 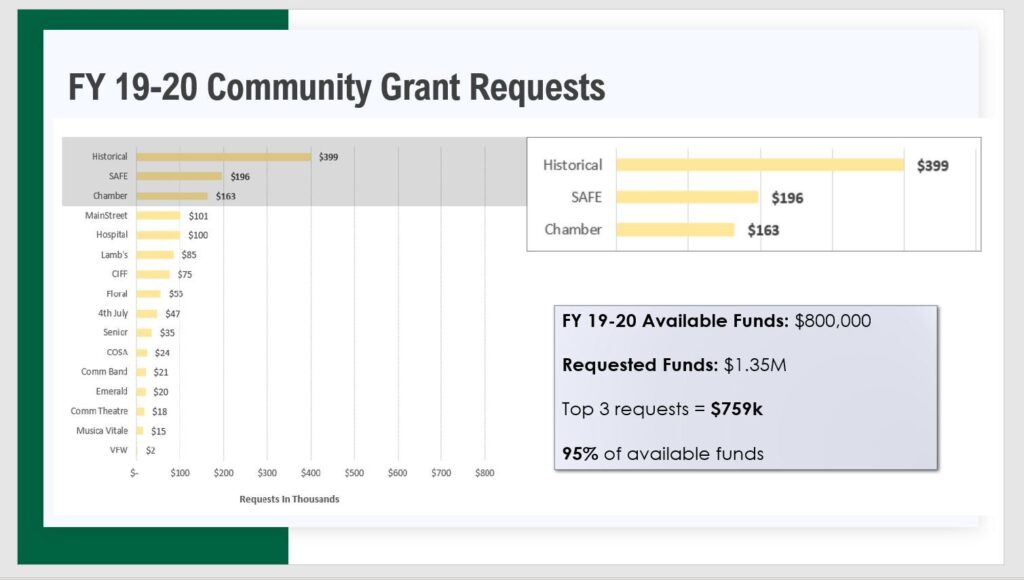 Last June, the council took a final vote to move forward with the relinquishment acceptance of State Routes 75 and 282 from Caltrans to have local control and maintain the roadways at a higher standard in a timely manner. City Manager Blair King gave an informational presentation on the progress of the relinquishment. Subsequent to the council approval, the Caltrans commission gave consent and State Senator Toni Atkins introduced Senate Bill No. 479 (SB 479) to receive the state legislator’s approval to relinquish the roadway. SB 479 went through the assembly and Senate, and King pointed out that at the last minute it got caught up in a filibuster and didn’t make it through. While they were waiting to re-introduce it, they received a draft of a new bill that included additional conditions from the Navy not previously discussed. In it, the city would need to “seek and receive concurrence from Naval Base Coronado before commencing any work that will alter or affect traffic regardless of the size or scope of the project. Additionally, The City will be required to enter into and maintain an agreement with Naval Base Coronado that specifies the procedures for completing required traffic studies.”

The city has drafted a Memorandum of Understanding (MOU) to the Navy, with regards to project approval and completing traffic studies to CEQA standards. The MOU also calls out exemptions, like annual events, routine maintenance, emergency repairs, and other activities to be determined. The city also agrees to consult with the Navy on any project over $1 million and the Navy will have the opportunity to object in a timely manner.  Council concerns included the timeliness of getting projects done and additional costs for projects. The city cited First Street and Ocean Blvd. as examples of roads they maintain that currently have Navy access. Mayor Bailey and the council felt that they didn’t want to swap Caltrans control for Navy control and “if the MOU is not reached, [the Mayor indicated he is] not in favor of moving forward with the relinquishment.”

Councilmember Heinze felt that there was more work to be done in making sure that this was being handled by the right authority in the Navy. With this delay, King said that the original $22 million negotiated with Caltrans may have to be negotiated, depending on the timing of this going through.

Director of Community Development Rich Grunow gave a presentation detailing options for an On-Demand Electric Transportation Services program. He outlined the broad goals for the program:

The vehicles known as Neighborhood Electric Vehicles (NEVs) have a maximum speed of 25 mph, and are ideal for short trips ranging from one to three miles. Current Coronado mobility options include MTS routes 901 and 904, and the city-sponsored Free Summer Shuttle (which costs approximately $165,000 per year), ferry services, paratransit services (e.g., Coronado Cab), rideshare options like Uber and Lyft, Seniors Out and About, and SANDAG community vanpools.

Alexander Reeves and his colleagues from Circuit, which operates the FRED transportation system in downtown San Diego, called in to the meeting to discuss their program and answer questions. Councilmember Heinze emphasized that the Cays needed transportation services to connect them to the village, and also suggested dialoging with the Navy to see if it would help sailors come from base into town.

Councilmember Donovan proposed a pilot program that would allow them to test the system without committing too many resources, and see what benefits and pitfalls are found. Councilmember Tanaka said that he could get excited about the program if it was all electric, but pointed out that the village and Cays residents have different objectives. “It would need to be more convenient and less expensive than alternatives,” he commented.  Councilmember Sandke pointed out that the timing was not the best during a pandemic, but said it would be a good idea to plan now and maybe implement in a year, saying “I see promise in this.”

With a consensus to seek more information, ultimately the council voted 4 to 1, with Councilmember Heinze opposed, to proceed with a motion that would look into a system that would get cars off the street, impact traffic and congestion, be convenient for users, and incorporate the needs of the Cays, and look into how it could benefit the Navy. King said that they would look to implement a pilot program for summer 2021, with a goal of implementation in summer 2022, when hopefully the pandemic is past. He indicated it would take several months to create a business plan and took direction to incorporate the Mobility Commission into the planning of this program.

Lastly, Councilmembers Tanaka and Heinze volunteered and were appointed to a temporary council subcommittee to review outside legal counsel services to assist the City Attorney as needed.

The City of Coronado was named Emerald Keeper of the Month by President Amy Steward, along with Board Members Ginger Cox and Christina Slentz...
Read more
City of Coronado

The City of Coronado has been making measurable contributions to reduce energy and greenhouse gas emissions. They are working toward implementing sustainable best...
Read more

Let’s talk burgers! Everyone has a favorite, but now there’s a fresh, new burger option in town to try with some truffle fries and...
Read more
Advertisement
Sponsored Partner Links