“Welcome Aboard, Boris!” Emerald Keepers Partners with CYC to Skim the Bay

A small group gathered at Coronado Yacht Club (CYC) to welcome Boris, a newly installed marine skimmer, to the premises last Thursday morning. Installation of Boris is the latest step in Coronado’s Emerald Keepers’ strategy to keep Coronado and its waters clean and promote sustainability. 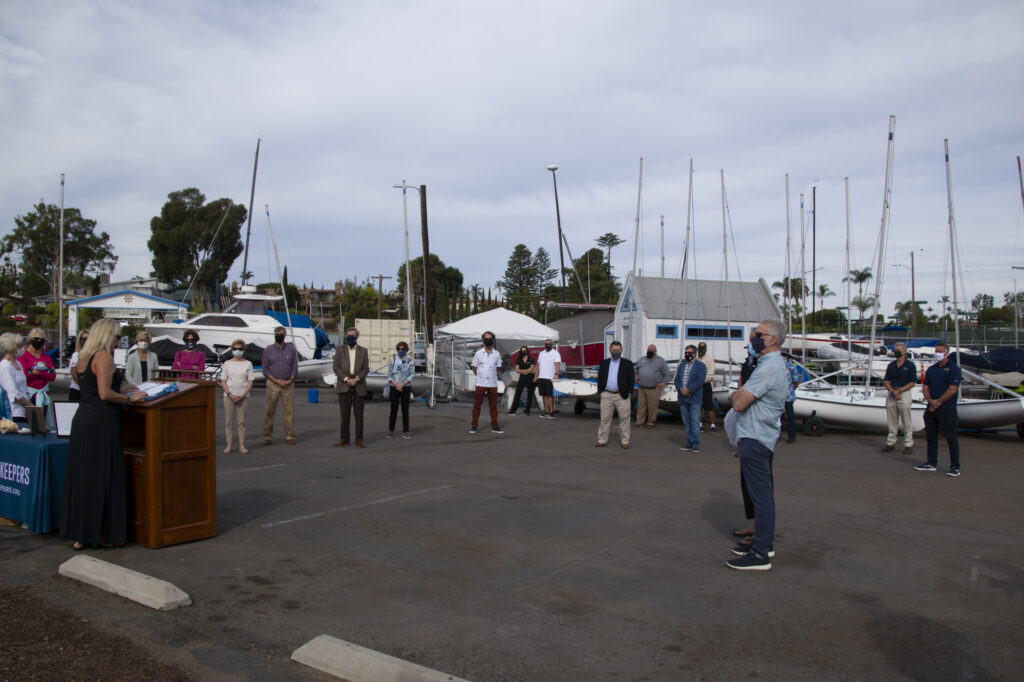 Funded entirely by donations and made possible by CYC’s willingness to operate and maintain Boris, the project demonstrates how partnerships between individuals and organizations can contribute significantly to creating a more sustainable environment for an Emerald Green Ocean Blue Coronado. The floating marine skimmer –smaller than a small trash dumpster– is attached to a CYC floating dock at the northern end of Glorietta Bay.

Andrew Bleier, Senior Vice President of KECO (a local San Diego company and manufacturer of the marine skimmer), briefly described the system’s capabilities. Running 24/7/365, Boris pumps 350-400 gallons of water through its system to remove and collect floating debris and oil sheen from the water’s surface. It clarifies the water through aeration. Operation and maintenance of the system is very simple and requires minimal human interaction.

At the small, socially-distanced event, the skimmer was christened “Boris” after a dog that loved swimming in the bay. “Boris’ owner picked up trash and marine debris every day while Boris frolicked in the bay,” Emerald Keepers President Amy Steward, explained. “A few days before Boris died, he wanted to go in the water, but because the dog was so feeble, his owner restrained him. After his passing, Boris’ dad felt he had deprived Boris of his greatest joy. An anonymous major donor, Boris’ dad is very excited to have his beloved dog ‘swimming’ again and collecting marine debris. Both Boris and his dad are true Emerald Keepers, and for this reason, this marine skimmer is christened — and will forever be known simply as — Boris.” 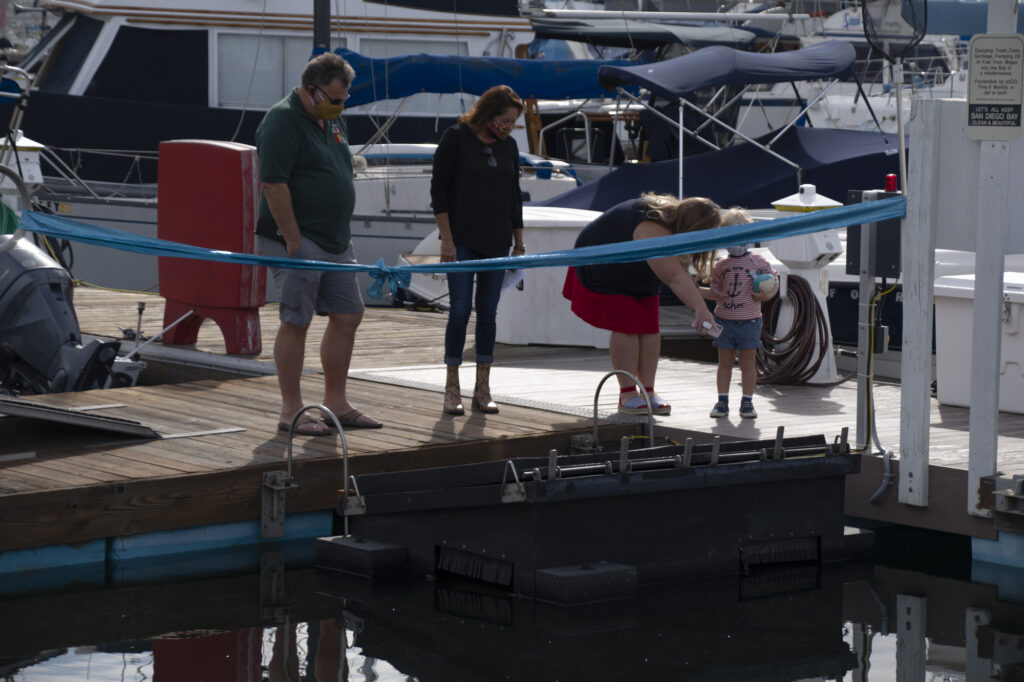 Coronado City Council Member Mike Donovan said, “The installation of the Marine Skimmer at the Coronado Yacht Club is just one more great example of the outstanding efforts of the Emerald Keepers team and one more step toward keeping our bays and oceans free of plastics and other litter that damages waterways and harms aquatic animals.”

During the brief ceremony Amy Steward acknowledged the on-going efforts by CYC General Manager Lou Miloiti and CYC Green Team Chair Rose Ann Krock, to make CYC more sustainable. After thanking Fabian Arreola for his help with installation of the skimmer as well as CYC member, Fred West (who provided the crane to install the skimmer), Steward stated, “Marine Skimmers are best situated in marinas where there is staff to handle the minimal maintenance and care of the skimmer. This location is perfect. Within the first few hours of operation, Boris had already cleaned the scum and improved the water clarity. Emerald Keepers would love to put another marine skimmer at the cty marina and a couple at the Cays.” 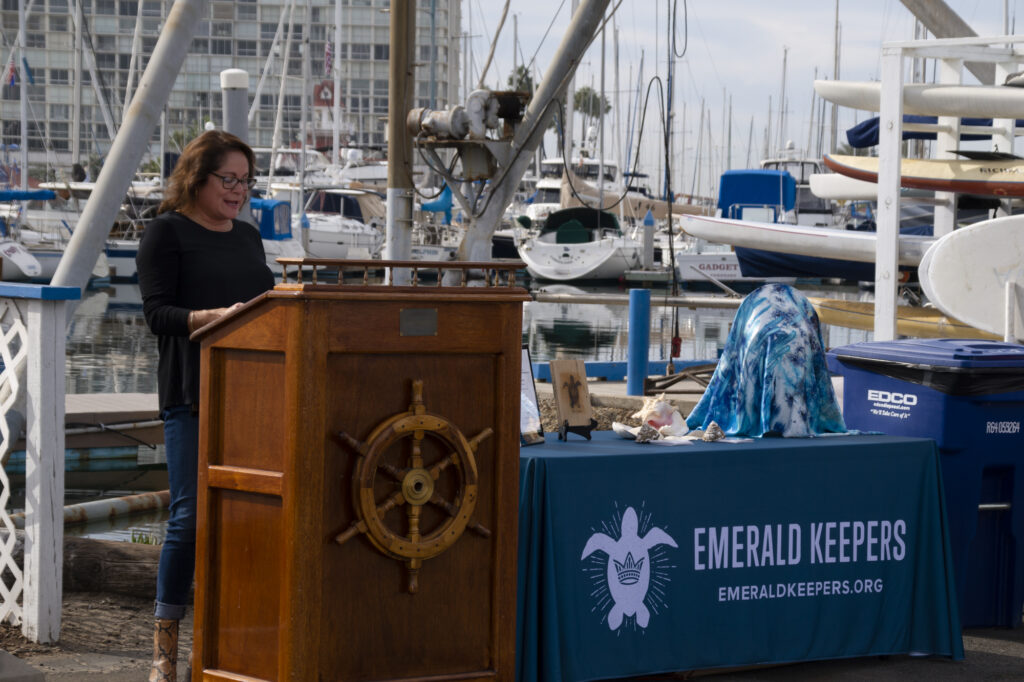 “Let’s all help Boris as well by continuing to use less plastic and recycle, said CYC Green Team Chairperson Rose Ann Krock. “Pick up trash when you come across it, especially in and around the water.” In gifting Boris to CYC, Steward emphasized, “Emerald Keepers is a non-profit organization comprised of a group of dedicated volunteers leading a growing community-based effort to care for our coastal community and ensure Coronado’s sustainability for generations to come. Emerald Keepers welcomes everyone to join their organization.”

Learn more about what they do at EmeraldKeepers.org. And if you are interested in becoming a donor for the next Marine Skimmer, or having one for your marina, please email EmeraldKeepers@gmail.com or call 619-535-7152.

Earth Day is April 22, 2021 This Earth Day, Emerald Keepers is partnering with MainStreet and the Coronado Chamber of Commerce for Shop Coronado! Tell them...
Read more
Community News