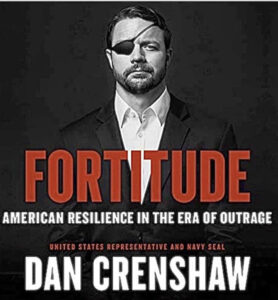 Congressman Dan Crenshaw, recently reelected for his second term in Texas’s 2nd District, returned to Coronado on November 7 to hold a book signing event for his widely-praised book FORTITUDE American Resilience in the Era of Outrage. Despite the overcast weather and threat of rain, hundreds of people lined up on sidewalk outside of McP’s Irish Pub to meet and have their book signed by Crenshaw.

Crenshaw has a strong connection with Coronado. He spent 10 years stationed in Coronado with the Navy SEALS and also met his wife Tara here. Crenshaw chose Coronado as the location for his first book signing event because many of the lessons in his book were learned while he was stationed here with the SEALs.

“The book is multi-disciplinary… to support the lessons I am trying to teach, I draw upon my SEAL experiences, on my personal hardships, but I also draw upon psychology studies, ancient philosophy, the Bible and pop culture so its a fun book to read,” said Crenshaw. “I try and make an argument and speak to everybody where they are at in their life, which is why I think it is popular.”

Crenshaw’s event took place on the day that former Vice President Joe Biden was announced as the winner of the 2020 presidential election. This election was one of the most divisive in U.S. history, sparking outrage and contempt throughout the nation. When asked how his book could help people navigate these challenging times, Crenshaw said, “I wrote a chapter titled Be Still that recommends you count to ten before you react, count to ten before you assume something; it encourages people to think through their emotional reactions. I find that the tendency is to question the character and motives of the other side, just because they are the other side. We need to remember what makes America exceptional, it is the live and let live philosophy, federalism matters, you should be able to live your life and work within your community, solve problems within your community to the greatest extent possible.”

Having grown up in various countries because of his father’s business, Crenshaw gained perspective and appreciation for what it is to be an American. He talked about how his experiences shaped his love for America. While describing his experience of attending high school in Colombia he said, “You learn what you really have in America. Colombia was a war stricken, poverty stricken country, but I watched them improve over time… and how did they improve? Honestly, through American principles, it is a great success story, you see what works and you see what doesn’t work and it gives you a great appreciation for this country.” Crenshaw’s passion for this country was evident in everything he shared during the interview.

Coronado’s Bay Books set up the event, selling over 500 books within two hours with even more orders coming in throughout the day. Caryn Clausen, manager of Coronado Bay Books, said, “This is huge for Bay Books, it has been really hard for small businesses here in Coronado [during the pandemic], especially for retail, and this has definitely helped us immensely.” Not only did the event support the local bookstore, restaurants in the area benefited from the large number of people who came to the event.

The event attracted locals as well as supporters from across the bridge, and included old and young, families, active and retired military, active and retired politicians, former Texans, aspiring Navy SEALS and some of Crenshaw’s Navy SEAL teammates. Some waited 2-3 hours for the opportunity to meet the Congressman and get their book signed. When the books were sold out, books sleeves were provided for those who wanted them signed, while others chose to have shirts, hats or various items signed instead.

Neighbors in line got to know one another, strangers became friends, and many connected over the shared love of our amazing country and the desire to continue to make it better.

Coronado residents Matt and Jodie Bartell made this a family affair, coming out to show their support and appreciation. “We went to the signing as we have heard the congressman speak on TV and podcasts, and were impressed with how well spoken he was with regards to issues and conservative issues,” said Jodie. “We also know of his time in the teams and we always want to support those who served and suffered a loss. Whether left or right on the political scale, we should always support our military men and women. The event was a breath of fresh air given what is going on in our country right now.”

The following was provided by Twelve Books, Grand Central Publishing:

FORTITUDE is a no-nonsense advice book for finding the strength to deal with everything from menial daily frustrations to truly difficult challenges. More than that, it is a roadmap for a more resilient American culture. With meditations on perseverance, failure, and finding much-needed heroes, the book is the antidote for a prevailing “safety culture” of trigger warnings and safe spaces. Interspersed with lessons from history and psychology is Crenshaw’s own story of how an average American kid from the Houston suburbs went from war zones to the halls of Congress-and managed to navigate his path with a sense of humor and an even greater sense that, no matter what anyone else around us says or does, we are in control of our own destiny.

Dan Crenshaw served in the Navy SEALs for a decade, achieving the rank of Lieutenant Commander. After being wounded in the Helmand Province of Afghanistan in 2012, he lost his right eye and required surgery to save the vision in his left. He earned two Bronze Star Medals, the Purple Heart, and the Navy Commendation Medal with Valor. Retiring from the military in 2016, Crenshaw earned a Master of Public Administration from Harvard University’s Kennedy School of Government in 2018. He was elected to the United States House of Representatives in November 2018.

Coronado SAFE is partnering with Mental Health America (MHA) in the national recognition of Mental Health Month (May). While SAFE acts as the facilitator...
Read more

Local, base and shipboard fire fighting teams responded to a fire aboard USS Bonhomme Richard (LHD-6), a Wasp-class Amphibious Assault Ship, while it was...
Read more
Military