This week’s city council meeting started off with two well-deserved ceremonial presentations and an impressive student presentation by the Coronado Middle School Robotics Team. I was pleased to be able to attend in person for the first time in months.

The first well-deserved recognition went to Floyd Ross with a proclamation of “Floyd Ross Day” on October 20, for his many contributions to the community since he arrived in Coronado in the mid-1970s as a Navy Senior Chief. He and his late wife Mary helped organize Concerts in the Park, which celebrated its 50th anniversary this year. He was also the past president and 35-year member of the Coronado Council of Churches and volunteered as the city council chaplain for more than 20 years. He has also served as a board member and president of the Coronado Lion’s Club, and he serves as a director and was past president of Coronado SAFE. Always smiling and looking dapper, he is ready with a warm greeting and willing to help in any way.

The city council also honored San Diego County Board of Supervisor Greg Cox for his more than 25 years of dedication to improving the public safety, health, and quality for all families in the region. He specifically partnered with the City of Coronado to improve fencing along the Silver Strand, was a tireless advocate for the Bayshore Bikeway and Tijuana River Valley sewage issues, and assisted with advocating for CARES Act funding for the COVID-19 pandemic. Mayor Bailey and the councilmembers thanked him for his support of Coronado issues through the years and echoed that he will be missed.

Eight CMS students and their Robotics Team Coach Roberta Lenert appeared via Zoom to pitch their innovative team ideas to get residents moving on the island. The teams are sponsored by the Coronado Schools Foundation and have previously brought home trophies. 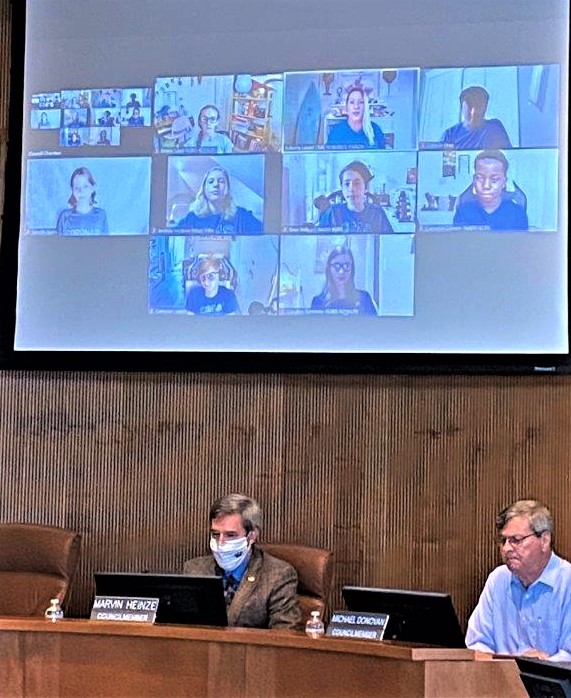 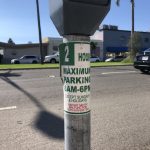 Police Chief Chuck Kaye gave a presentation on the new License Plate Recognition (LPR) Parking enforcement which will begin in January, after the annual free holiday parking in December. As has been previously discussed, removing the parking meters declutters the sidewalks, making them more pedestrian friendly, eliminates their constant maintenance, and helps more effectively use parking resources with vehicle turnover. With the new system, two-hour free parking will be allowed and then if a vehicle is not moved a ticket will be issued. The current ticket price is $24.50, which has not been increased for ten years, so city staff did a peer city review and came up with the new ticket price of $57.50 to enhance compliance.

Data from the past five years indicates an average of 6,170 citations are issued each year, and an average of $199,888 per year in parking citation revenue is collected. An increase to $57.50 per citation is estimated to result in the city’s portion of the parking citation revenue increasing to $278,000 with the County of San Diego receiving a $12.50 administrative processing fee for each citation. Kaye said that signage will be posted, and a public education campaign will be done prior to the change over to LPR cameras. The council unanimously approved this Traffic Code Ordinance.

In the City Manager’s Report, King announced that the Port had just released a revised Draft of its Port Master Plan Update with a four-week review period. Two of the highlights include: a portion of Grand Caribe currently designated commercial will be re-designated as free space; and there is no net increase of hotel rooms for Coronado.

During Oral Communication, Robert Kraft, the secretary of the 4th of July Committee asked the Council to allow them to pursue fundraising options to offset the $11,500 cut to their budget from the city and $25,000 from the Port. The council thanked the 4th of July committee for their diligent work and agreed to revisit this issue when more concrete details were available. Councilmember Donovan asked if there was still a chance that the Port money would become available to which City Manager Blair King said the Port is now making them submit an application, so it is uncertain at this time.

Senior Management Analyst Kellyn Sanderson presented the changes regarding special event permits that will align with current practices and establish an application fee, which was unanimously approved. The highlights of the changes include:

The Council unanimously approved the Lifeline Business Loan payment extension for a six month extension. $1.685 million has been given to eligible businesses to help them weather the COVID-19 pandemic. Councilmember Sandke asked about the possibility of forgiving these loans as grants, but City Manager King said that some businesses have already started repaying their loans. The council decided that this issue can be re-evaluated after the extension period. If businesses need to request more payment time, they need to contact Assistant to the City Manager Dominique Albrecht, who was credited for doing an outstanding job administering this program. 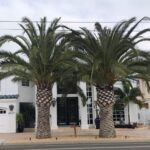 Director of Public Services and Engineering Cliff Maurer gave a presentation on two Canary Island Palm trees planted in the public parkway at 401 First Street. He gave a timeline and detailed that the homeowners were notified after the trees were planted last year, in the public right of way, in violation of the Coronado Municipal Code. In response, the homeowner Gary Gorken detailed how they had obtained liability insurance and appealed to the Street Tree Committee to be able to keep the trees, although they are not on the approved tree list. Mayor Bailey asked Maurer why the trees were on the restricted list to which Maurer cited increased maintenance and liability from fronds and fruit droppings. Maurer pointed out that the trees were valuable and could probably be sold and moved.  The council felt that the homeowner had done this without knowing the rules, but that making an exception might set a precedent for future tree issues. The council unanimously upheld the Tree Street Committee recommendation to remove the two palm trees and gave the homeowner one year to comply. The council felt it was important for homeowners to know the rules and City Manager King said he would have staff prepare a proposal to educate homeowners. It was also suggested that the Street Tree Committee and the Coronado Real Estate Association could help with this.

City Manager Blair King also thanked Fire Chief Jim Lydon and his department for their tireless efforts in helping on the Glass Fire, Creek Fire, Castle Fire, and the Valley Fire, as part of the San Diego Strike Team, throughout the state. With the extensive fires, Engine 37 was gone for a month helping where needed. Chief Lydon said he is proud of his team and that this is “neighbor helping neighbor” and other fire departments would be there for us if ever needed.

Councilmember Sandke thanked the family of the Teresa M. Vander Velde Trust for their $3,500 donation to support the Coronado Public Library.