This article is part of a series that focuses on different viewpoints and race relations in Coronado in the wake of the George Floyd tragedy. 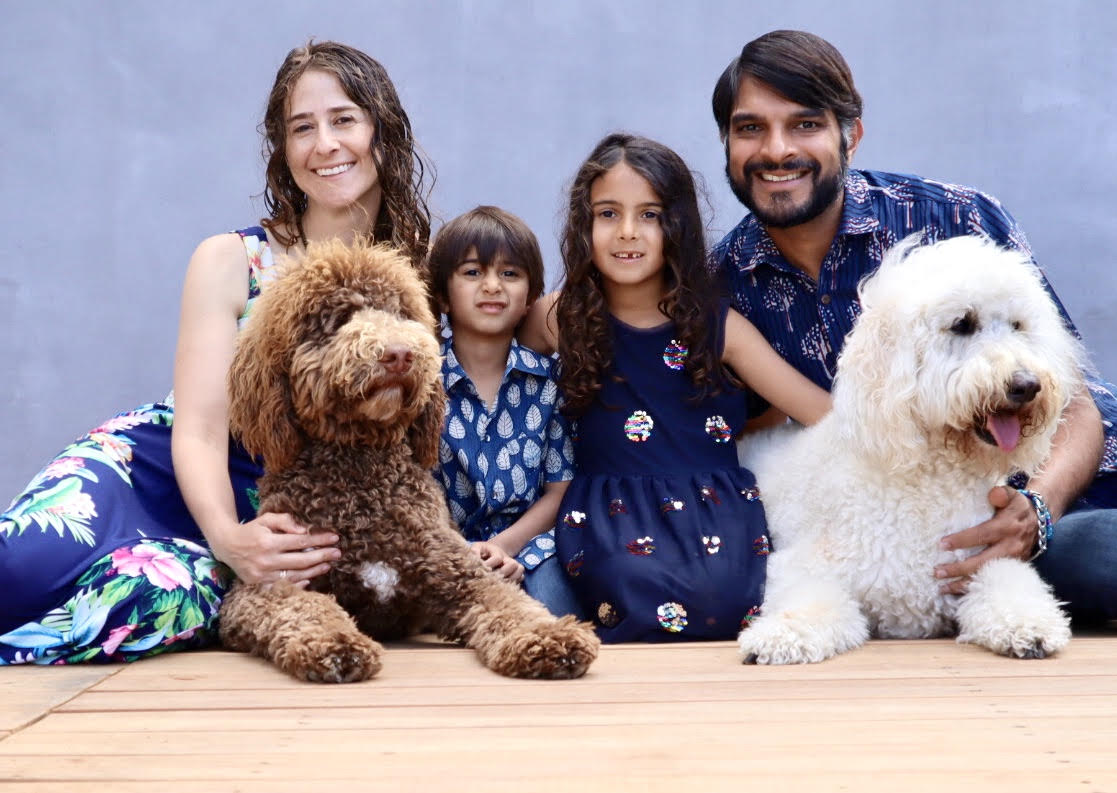 Akshay Sateesh with his wife (Brooke), children (Kavi and Aria) and family dogs (Zanzibar and Kona).

The more he gets involved in the community, bioengineer and business executive Akshay Sateesh shares how he’s a citizen of Coronado, not a Coronado citizen of color.

Sateesh used to work on DuPont medical devices and later became the founder of Ziksana Consulting, which helps organizations use the science of play to improve creativity, leadership, decision making and culture.

Sateesh was born in India and raised in Kuala Lumpur, Malaysia. He attended university and met his wife, Brooke, in Philadelphia. The couple moved to Coronado in 2010. Sateesh was starting his leadership development business. Brooke’s family lives in East County and she’s a physician who runs a private practice. Today they have two children ages 7 and 5.

“We’re just hustling,” he said. “We work hard, play hard and enjoy the flexibility to choose our schedules.”

Sateesh comes across as an insightful, engaging and solution-oriented person.

“We got married here in Coronado,” he said. “The ambiance is good for the soul I think. We’re not going anywhere. This is home for us.”

They didn’t really think about demographics when choosing to settle in Coronado, Sateesh said. He explained how they’re aware of demographics; they had lived in big cities before.

“But if you know a city well enough, if you drive through and see the housing, the streets, whether they’re manicured or not,” he said, “that’s the first level of assumptions everyone makes. The first set of biases start from just a visual representation of a neighborhood. That may be part of my privilege, thinking this looks like a nice area, and we could live here and that’s kind of it.”

He said they looked at some factors: family-friendly, sidewalks, walkability, a beach town.

“A decision point was made a little out of privilege obviously,” he said. “Coronado is obviously a privileged place.”

Since 2010, Sateesh has wanted to connect with the community more and ended up serving as chair of the Coronado Parks & Recreation Commission for two years and on the commission for a total of five years. He said he enjoys caring about community aspects and following the process to hear citizens’ voices for change.

“That was a great experience; I really liked it,” he said. “I don’t think I felt any race issues came up in my tenure at the commission. I wanted to be part of a democratic and fair process. I’d never done anything like that.”

He’s never felt treated differently amongst his Coronado friends, Sateesh said. And he doesn’t mind being “seen.” When his family visits India, his wife is the one who stands out and he disappears, he said with a light laugh.

“However, what’s interesting is we don’t know what people truly think unless they share it,” he said. “No one really wants to engage in tough dialogue here. It’s utopia over here. Keep it the way it is, because we shouldn’t rock the boat; there’s that mindset in the air here because of what Coronado feels like. But we’re not assaying ugly truths necessarily, just truths.”

Sateesh has had two experiences of note with the Coronado Police Department. Once for a routine traffic stop, where the officer asked him if he knew he had made a wrong left turn. Since he drove in and out of Coronado daily, he quickly corrected the officer to say his turn was a legal one and she had the hours wrong. He said other cars made the same turn before him and after. He noted it wasn’t a big deal but that he wondered after: Was I stopped because of the color of my skin? Why was I chosen out of everyone else for a legal left turn?

“My experience is that I ask myself that question more times than I would like to as an American citizen.”

The second encounter was this year, after COVID-19 was causing closures. The Coronado tennis courts were closed but players often took turns hitting balls off the Glorietta courts tennis wall that works well for exercise and practice. A police officer approached him while he was playing and told him he had to leave.

“She was threatening to cite me $1,000 for a misdemeanor and was rude,” he said, explaining how he shared he didn’t think that was the rule and no one else had been stopped.

Sateesh took down her information and followed up with the police department, which he said responded promptly and well. The corporal Sateesh talked with mentioned there was video, and Sateesh asked if he would review it. The corporal found Sateesh did nothing wrong and the officer was at fault — he would discuss his with concerns her and council her.

Sateesh had been satisfied with the corporal’s initial response. Yet later, after the events following George Floyd’s death, he wondered: What was the counseling she received, and how do you know she’s going to change her behavior? What do our police officers go through for training, community interaction, communication as well as unconscious and implicit bias? What happens to officers who have complaints against them? What accountability measures are in place so citizens’ concerns are resolved?

“I think maybe a bigger conversation is necessary with the police department and city leadership and I’m happy to have it,” Sateesh said. “I can continue to ask questions about accountability and transparency. We should be able to openly ask those questions and become aware of what process is in place.

“Based on my experiences of being in the U.S. for the last 23 years, I think I am I treated differently than other people.”

As a minority, Sateesh said he finds it more difficult to have an open conversation and without feeling like people are trying to defend themselves and their opinions. He said how a more empathetic approach could help understand all points of view.

Aly Lawson
Aly has a BA in mass communication, emphasizing journalism and public relations, and a MBA in marketing. She has worked as a reporter and marketer in various industries and overseas. She also won a best community business story award from the Nevada Press Association in 2017. Originally from Washington, this is her second time living in Coronado, where her husband is stationed as a Navy helicopter pilot. They have two small children and the whole family adores Coronado. Have a story for The Coronado Times to cover? Send news tips or story ideas to: manager@coronadotimes.com

Coronado Unified School District (CUSD) employee Donald Walton passed away on December 21, 2020 from cancer at the age of 59. Lovingly known as...
Read more

Locals interested in an entertaining wine night signed up to “come away” to Paso Robles Friday, September 25 for a virtual getaway, tasty sips,...
Read more
Dining

The skeleton crews aboard the offshore cruise ships, Celebrity’s Eclipse and Millennium, may be in a holding pattern, but are still doing their duties...
Read more
City of Coronado

Mayor Richard Bailey said a friend who doesn’t live in Coronado texted him recently joking, “Congrats on having the job that literally no one...
Read more
Business

“Inn at the Cays” Continues to Push Proposal Despite Opposition

The Inn at the Cays proposal team is continuing to push despite opposition from the City of Coronado and some residents, as well as...
Read more
Advertisement
Advertise Here (Get Rates)