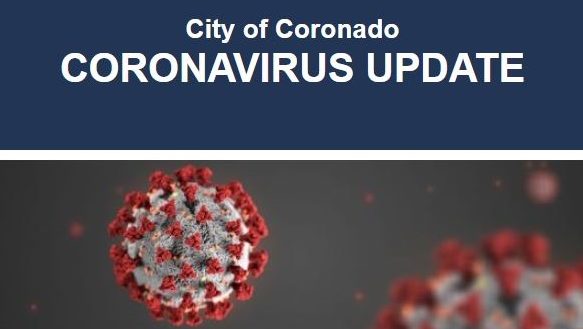 The City plans to resume certain commission meetings in the coming weeks that will be held virtually. The City added a third meeting. The Historic Resource Commission will hold its next meeting on April 15. The other two are the April 14 Planning Commission meeting and April 22 Design Review Commission meeting. Commissioners will connect using an internet-based meeting ap p and none is expected to physically attend. The meeting agendas will be posted as they normally are, and members of the public are encouraged to comment in advance. The meetings are subject to cancellation depending on COVID-19.

The April 7 City Council meeting will be held as planned at City Hall, 1825 Strand Way. Click the link below for a link to the agenda and information on how to comment in advance.

City staff has worked diligently to get the word out about the City Council’s recent decision to close the City’s beach, including Dog Beach, on weekends as well as prohibit parking along the west side of Ocean Boulevard indefinitely.

The Council took several actions at a special meeting on March 31, including the indefinite closure of the dog washing station at Dog Beach, playground equipment at all parks, the bandstand at Spreckels Park and the City’s tennis courts.

Most parks will remain open. However, due to people congregating at Sunset Park following the beach closure, the City shut down Sunset Park. The City Council will reevaluate the closures April 7.

City of Coronado STATEMENT May 31, 2020TO:         All Coronado residents, businesses, and guests:In view of the violence and property destruction that has occurred throughout San Diego...
Read more
City of Coronado

https://www.youtube.com/watch?v=f0u7UKvI-JE&t=195sStarting next week, people can sit or lay out on the sand. Find out why and what is still restricted at the beach in...
Read more
City of Coronado

Passive Use of Beach Permitted Beginning June 2 San Diego County has announced that beaches may open June 2 for passive use, including sunbathing and...
Read more
City of Coronado

https://www.youtube.com/watch?v=fFGnWXQv6_w&t=1sA special Memorial Day Ceremony will be shown on Coronado TV on Monday, May 25. Find out about the annual event and how its...
Read more
City of Coronado

Editor's Note:  This article has been updated to make it clear that passive beach activities will be allowed once the County of San Diego...
Read more
City of Coronado

Advocacy Letter for Small Businesses Approved The City Council endorsed a letter Tuesday, May 19, that requests state and county health orders be amended to...
Read more

City of Coronado STATEMENT May 31, 2020TO:         All Coronado residents, businesses, and guests:In view of the violence and property destruction that has occurred throughout San Diego...
Read more
Community News

On Sunday, May 31, the television broadcast show 60 Minutes will report on the raw sewage that regularly flows through the Tijuana River Valley...
Read more
News

By Anna Almendrala, Kaiser Health News May 29, 2020“You are the most selfish f—ing people on the planet.”I jerked my head to the left, where I...
Read more
Community News

The Graham Memorial Presbyterian Church Thrift Cottage reopens Tuesday, June 2 for sales and donations. The new hours are Tuesday through Saturday, 10am to...
Read more
Advertisement
Advertise Here (Get Rates)