U2 Related Events at the Library: Film Screening and Author Visit 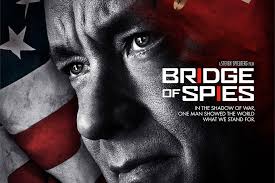 While attempting to document the nuclear capabilities of the USSR, CIA pilot Francis Gary Powers was shot down by a Soviet surface-to-air missile on May 1, 1960. Captured by the KGB, he was interrogated, convicted of spying, and sentenced to ten years. However, in February 1962, arrangements were made between the Soviet Union and the United States for a prisoner trade with captured Soviet KGB spy, Rudolf Abel. The two spies were brought to the Glienicker Bridge and exchanged.

Over fifty years later, Steven Spielberg would bring this incredible story to the big screen. Bridge of Spies earned six academy award nominations and was a box office hit.

The public is invited to a free screening of the Bridge of Spies film on Saturday, March 14 at 3 pm. The following day, Sunday, March 15, Francis Gary Powers, Jr. will speak at the library at 3 pm about his latest book, Spy Pilot and discuss little known details about the U2 incident.

Powers is the Founder and Chairman Emeritus of The Cold War Museum, and Honorary Board Member of the International Spy Museum in Washington, DC. He is the author of Letters from a Soviet Prison (2017) and Spy Pilot (2019). He lectures internationally and appears regularly on C-SPAN, the History, Discovery, and A&E Channels. These events are free and open to the public thanks to the Friends of the Coronado Public Library.

The 153 Coronado positive COVID-19 cases are cumulative since March 2020; and these reported cases are split between Coronado residential zip code (92118) and...
Read more
Community News

As the Dive Into Discovery Summer Reading Program comes to a close, kids and teens are invited to pick up their prizes during the...
Read more
Community News

Patrons of the Coronado Public Library now have access to books in 68 academic and public libraries throughout California and Nevada using the library’s...
Read more

Elizabethan theaters were frequently shuttered in London during outbreaks of the plague, so communities were unable to come together and witness performances during times...
Read more
Education

Summer has come early in some ways. While children are out of school for an extended period, the commonly known regression in academic growth,...
Read more
Community News

You may be at home in Coronado, but you're not alone! Coronado Teens and Tweens are invited to join the Coronado Public Library's Coronado...
Read more
Community News

The San Diego Writers Festival is Coming To Coronado!

UPDATE March 12, 2020 - This event is postponed until the fall 2020.  This free, immersive, all day experience on April 4 features live performances,...
Read more
Stage